Signing a deal with the devil 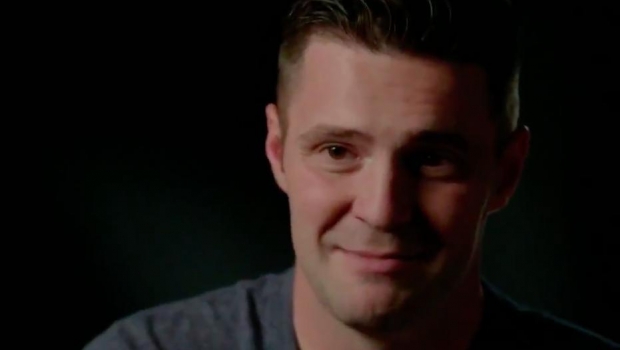 I’m a huge fan of the show Paranormal Witness, which features interviews with real people who claim to have survived something extraordinary.

Most of the episodes deal with ghosts or aliens, but Eric Breakfield’s story was different. When Eric was just a teenager, he was addicted to video games–nothing unusual there–until the day an anonymous stranger contacted him over the internet, inviting him to play a game called ‘The Contract.’ Those who participated were guaranteed to have their wildest dreams come true.

For Eric, a lonely teen ignored by the popular crowd, it was worth a shot. And after signing The Contract, his life did improve dramatically. The cheerleader who’d never given him the time of day was suddenly all over him. He had new friends, a better lifestyle. His grade-point average soared. But there was a price–a terrible price that drove home the horrible truth: The Contract wasn’t a game at all. Eric had signed a deal with the devil, and now it was his turn to do some recruiting. He was stalked and tormented, even within his own mind. But it wasn’t until his young nephew was at risk and his family was being terrorized that Eric realized he needed to come clean about The Contract and ask for help.

I realize this is an incredible story that will be extremely difficult for many of you to believe. It certainly was for me, but there was a sincerity about Eric that struck me when I watched that episode, and which led me to reach out to him. If his story unfolded the way he says, it challenges a lot of what I believe (or rather, don’t believe). This, however, I can say for sure: I am absolutely certain Eric is telling the truth as he knows it, and I applaud him for having the courage to share his story.

This is our interview about what happened to him. For more background, you can watch the episode of Paranormal Witness here (season five, episode four). Some scenes were dramatized for effect, but as Eric says, others were underplayed. Eric’s father, mother, and sister were interviewed for the program, along with the pastor who performed the exorcism. I highly recommend watching the show to get the most out of our interview. 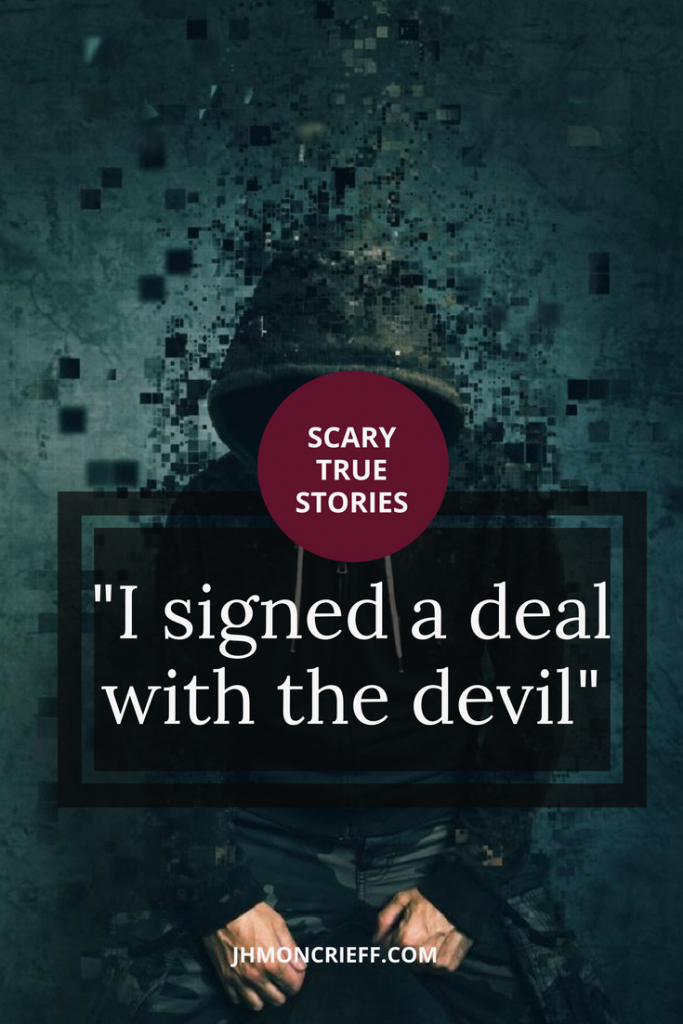 J.H. When you were first approached about The Contract, did you think it was a friend playing a joke on you? Why or why not, and how did you figure out this wasn’t the case?

Eric I did think for a minute it was a joke. It was when I read The Contract that I started to realize my friends wouldn’t go this far.

J.H. What convinced you The Contract was real? In the show, it mentions the moment Marnie agreed to go out on a date with you, but her newfound interest could have come from your renewed confidence and the fact that you asked her out. Was there anything else that seemed otherwise impossible or supernatural in nature?

Eric I was convinced when she said yes. Well, I started to believe, really. And yes, I felt like everything I wanted was happening, from grades to people wanting to be around me more. Honestly, though, it was the feeling within. I felt like God.

J.H. You mentioned your life was a living hell before the pastor’s intervention (is it correct to call it an exorcism?) What was happening at that time?

Eric It was hell, hearing voices speak to me, what they were telling me to do ( I thought I was crazy). And yes, it was an exorcism. There was so much evil happening in the house, in my life.

J.H. How did your family find out what was going on? When did you tell them, and how did they take it?

Eric They found out years later. They knew things were going on in the house but didn’t know it was because of me. I told them in 2012, the same year as the exorcism, and they took it hard. I thought they would hate me. They didn’t; (they were) just upset that I didn’t seek their help.

J.H. What happened after the pastor’s intervention? How was your life in comparison once it was over? Did you suffer any lasting ill effects, physically or mentally?

J.H. Paranormal Witness has been accused of exaggerating or fabricating events. There were some elements in The Contract episode that seem fantastical (your mother grabbed by something under the bed while your father was in the room; the Magus license plate; your eyes turning blue; the black smoke that came from your mouth during the intervention). Were any of these elements exaggerated or created for entertainment value? Was anything in your story falsified on the show?

Eric A lot of it was true. (My mother) did get grabbed by her legs, but it was while she was laying in bed. Nothing pulled her under the bed. I had more family there that night and the priest had seven other people with him. There was so much that happened. (Note from J.H. – I have asked Eric to elaborate but have yet to receive an answer. Should I receive one, I’ll update this post.)

J.H. You mentioned there were aspects of your story the show didn’t include. What were they?

Eric OMG, there was so much. (What I mentioned) in the previous answer was the majority of them. And things everyone saw that night, stuff that happened to other people there.

J.H.  I assume you believe in Satan, or at least demons, after your experience. Was this something you believed in before this happened? How has your faith changed from this experience?

Eric I did believe before; I was brought up in a Christian home. After a while I felt like God wasn’t giving me what i wanted. I was being a spoiled kid, and I was taught from other Satanists that, in a nutshell, Lucifer was being picked on. We sin but God forgives us, so why not Satan? So I started to think maybe God was jealous of Lucifer because he figured it out.

J.H. Whatever happened to the people you recruited? Once you discovered the truth about the “game,” did you warn them? Did others have similar experiences?

Eric I did warn a lot and a lot turned from their ways. Others I wasn’t fortunate enough to tell. That’s the part that still hurts to this day.

J.H. Sorry for this, but people will wonder, so I have to ask…some of the symptoms you were experiencing (voices telling you to kill, etc.) sound like schizophrenia or other mental illness. Was a physician ever consulted in your case? Was mental illness ever considered? (No offense meant.)

Eric Yes, it was actually and none taken, by the way. But yes, even I thought I was (mentally ill). I know now it wasn’t an illness. I didn’t have anything like that before I worshipped the devil and none since I was saved.

J.H. It’s a huge leap of faith, so to speak, to talk about something so personal and extraordinary on television. When you were approached by the show, were you at all hesitant about being interviewed? How about your family? What made you decide to do the interview? Was it difficult for any of your family members to talk publicly about what happened?

Eric I was not into it at first. I didn’t want it out there; I didn’t want to look like a fool. After a while I realized others need to know. Maybe this is my way of helping someone else who is considering it or already in it. My family members were like me–they didn’t want to do it, especially my dad. (The show) came to me about it actually, about a year later.

J.H. What was the aftermath of being on Paranormal Witness? Did the show impact your life in any way?

Eric Yeah, I feel like maybe I reached someone. I ended up getting a lot of Facebook Friend requests, but one person I actually talk to was going through something very similar. And I was able to help in a big way.

J.H. The internet being a lot more sophisticated now, if the “game” still existed, there would be tons of information, reviews, etc. about it that could be found in a web search. That said, do you think this is still happening in some form? Looking back, were there warning signs you missed that could help others now?

Eric Yes, it’s definitely still happening, and I do a lot of research still to this day, fighting against it. I did three videos on Youtube talking about it and exposing it. Honestly, I was a kid, I wanted the world, and I didn’t even look at signs.

J.H. If another person found himself in a similar situation and asked for your advice, what would you say?

Eric STOP is what i would say. I would tell them that, while it looks like luxury right now, later there is a price to pay that may cost you your life, and lastly, I’d tell them there is a saviour who can help.

J.H. How has your life and your outlook on life changed as a result of this experience? How is your life now? Has there been any kind of relapse since?

Eric I’ve gotten closer to God because, instead of believing on faith I believe because of proof now. And no, I have had no relapse or even come close.

J.H. You’re now involved with a paranormal investigations team. What made you decide to get involved? How has that experience been for you? Have you had any other paranormal encounters during your involvement with them?

Eric Yeah, I’ve seen things since but I know it’s not of good but of evil. I guess I feel it’s like being a cop and taking the bad guys off the streets.

J.H. Is there anything about your story or experiences you wish people knew? Any misconception(s) you’d like to clear up?

Eric There’s a lot more to the story. It would take a huge book or documentary to tell it all, and I wish there was a way everyone could hear the whole thing. I do however want people to know that we don’t need luxury in life if it’s gained through evil.

Thanks so much for sharing your story with us, Eric. Any respectful questions for him? I can’t promise he’ll respond, but I’ll do my best to get answers for you.