Scary True Stories: Working the graveyard shift with a ghost

Meet Gordon, who had several spooky encounters with a ghost when he was working at a golf club in the 1970s. This is the first time he’s told his story.

Thanks, Gordon, for sharing it with us.

The sign taped to the clubhouse door said HELP WANTED! APPLY WITHIN. This is exactly what I was looking for after months of job hunting.

“You’re not afraid of ghosts, are ya?” The man laughed.

My new job involved cleaning the golf club from 1 a.m. until 9 a.m. The food-prep lady and the bartender asked me if I’d seen any ghosts, but I figured they were just trying to spook me. I was 17 years old and gullible–or they thought I was.

One night after the bar staff had left, I sat down for a coffee break, hoping to catch a few minutes of a movie on TV. The TV was against the windows that looked over the ninth green. After a few minutes, I noticed the reflection of someone standing behind me in the windows. I quickly checked to see if anyone was there, but I was alone. The front door was still locked, so I thought I’d just imagined it.

A half hour later, I saw it again. This time the figure walked in the opposite direction. Jumping out of my chair, I ran to where I saw the man, but again, no one was there. Maybe I was seeing something outside and only thought it was inside? I put my hands on the window to shield it from the light and peered outside. It must have been a six-foot drop to the sidewalk below. I knew then it hadn’t been anything outside.

A month went by. One night I heard water running in the kitchen. I opened the kitchen door to see the sink’s taps were on. I had finished washing the kitchen an hour before, but hadn’t used the sink. It certainly wasn’t running while I’d been in there.

Then I noticed the boardroom doors were ajar. These doors were always closed and I didn’t even have to clean in there. I pulled them shut.

After tidying up the washrooms, I found the boardroom doors ajar again. Now I thought someone was playing games with me, so I looked inside. It was a sparse room with only a large table and ten chairs. It was cooler compared to the rest of the club house. I pulled the French doors shut again and went on with my business. Those doors became an ongoing problem–every week or so, I’d walk by and they would be ajar.

A month or so later, I heard the startling sound of marbles rolling across the floor directly above me at around 2:30 in the morning. I crept up the stairs, looking for the source of the sound. After about five minutes, I began to walk downstairs when I heard it again, except this time it was on the roof!

Gerry, the weekend guy, told me he saw a man in the changing room wearing a very dated golf sweater and pants tucked into his socks. Gerry told him the building was closed for the day, and the man headed upstairs. Gerry followed him to make sure he’d left, but the man was gone. No sign of him anywhere. There was a 300-foot-long sidewalk to the parking lot and there was no way the elderly man could have made it to the parking lot in a few seconds.

One night after everyone was gone I went to the locker rooms to pick up towels. I went through the changing rooms, picked up a full bin of towels, and pushed the bin into the maintenance office. At 8:30 a.m., I went back to the office to sign out. Towels were hanging off tools and cupboards, the backs of chairs, and piled on the floor. A tingle went up my neck as though someone was watching me. I don’t know how anyone got in there, as the door was locked at all times and I’d been the only one in the building.

The towel incident made me extra nervous for the next few weeks. I started doing my downstairs tasks early, while some of the bartending staff were still around. I don’t know what any of them would have done if I yelled, but it made me feel better knowing someone else was there.

Things were pretty quiet for the next month or so, except for when I found the boardroom doors ajar. This happened every week. Once when I was three steps away they closed right in front of me.

I bolted downstairs and called the police. The cops went upstairs and looked inside, but the room was dark and empty. They said it must have been the wind, but both windows were painted shut. Then they closed the doors halfway to see if they would shut on their own, but they wouldn’t swing closed without a push. At a loss, they said, “Well, must have been the Rossmere ghost.”

Several weeks later, I was taking a break on a beautiful summer evening. Leaning against my car, I enjoyed a cigarette while looking at the building. I could see a mannequin in one of the rooms. Being 17 years old, I thought a mannequin would be a conversation piece and a cool prop. So I waited until the golf pro came in and asked if I could borrow it. He found the key for the room, and as he opened it up, a stale dusty smell filled my nose.

He stopped about halfway in. “What mannequin?”

There was no mannequin in the room. There wasn’t anything that remotely looked like a mannequin.

Blood rushed to my face. “Sorry, I guess I made a mistake.”

I felt sick to my stomach, as I knew I’d smoked a whole cigarette, which takes at least five minutes, looking at that mannequin. It was pale white and didn’t really have any features, just a head and shoulders and torso. I couldn’t see any eyes or nose or mouth. But it was there. The next night I went outside about the same time, as I was convinced I must have seen a reflection. There was no reflection at all. 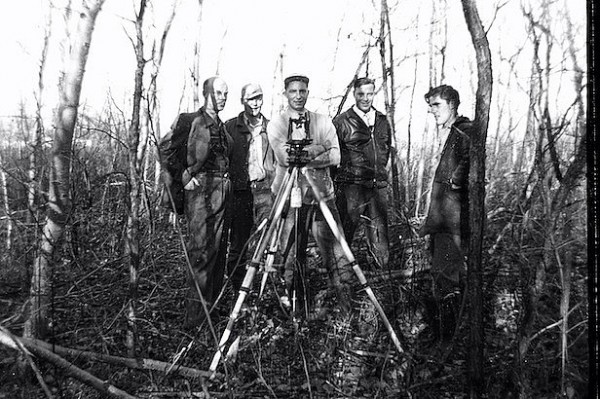 Some of the men who built the Rossmere Golf course. Credit: Rossmere Country Club

In the years since I left, I’ve done some research into the building. It was built during the housing boom, around 1910. By the spring of 1952, Mr. J. DeFehr obtained a permit to operate a funeral parlor there.

In 1956, the Rossmere Golf and Country club was built. The house at 951 Henderson Highway was their new clubhouse. Through the years, many additions were built, but in the center of it all remains the old original house.