Overnight in a haunted house 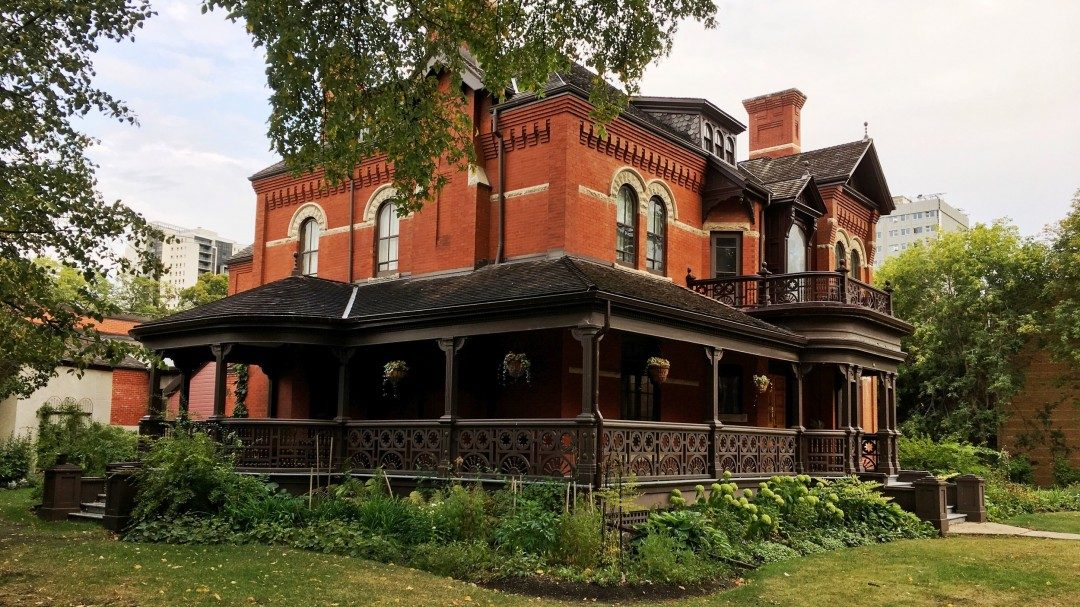 When the Winnipeg International Writers Festival selected me as one of four dark-fiction authors to stay overnight at a haunted house, I was excited, but I didn’t have any expectations–at least not on the haunted side of things.

Still, it was an amazing opportunity. Dalnavert is far from your average house. A national historic site built in 1895, it was once the home of former Manitoba premier Sir Hugh John Macdonald and his family. (Macdonald was the son of Sir John A. Macdonald, Canada’s first prime minister.) Today, Dalnavert House is also a museum filled with artifacts. No expense or effort was spared to recreate the home as it must have looked when Macdonald and his wife Gertie and two children–Daisy and Jack–were living there. 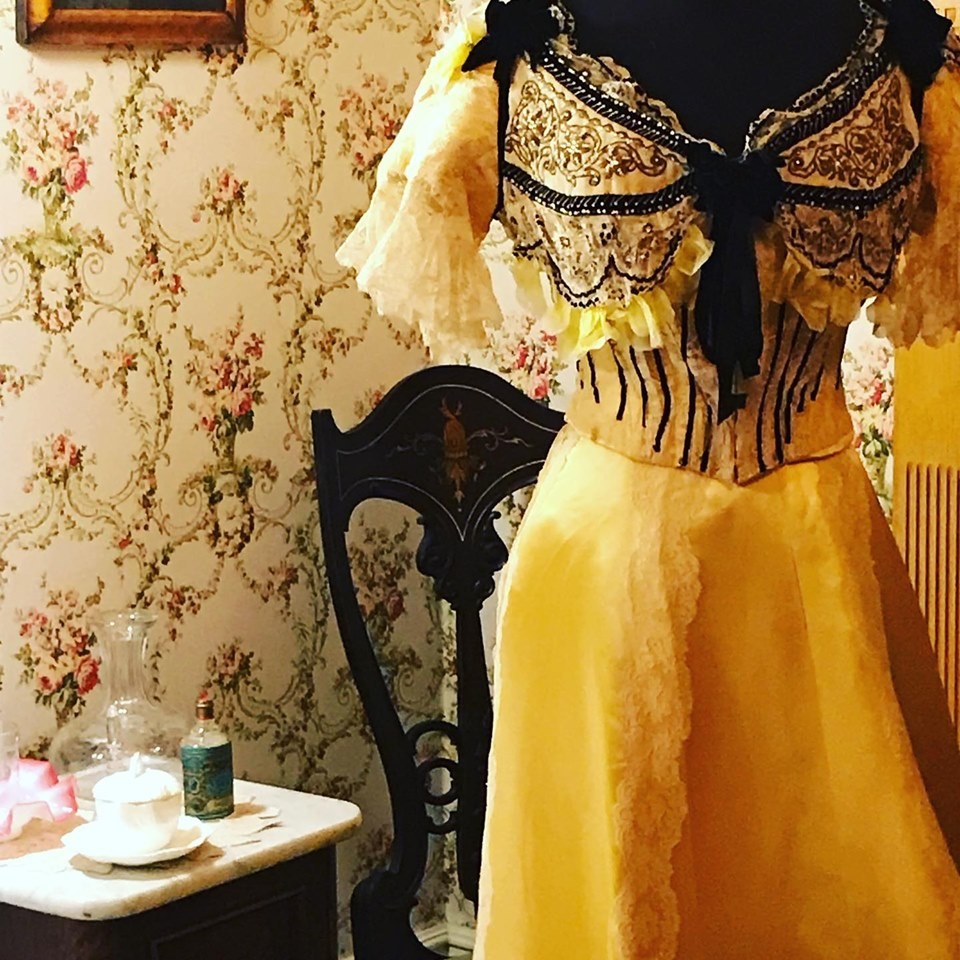 The evening started off with a reading from all four authors, including yours truly. The small room was packed with an appreciative crowd, and my thanks to Simon Fuller, Robert and Tara Clark, Andy Mondaca, and Rhonda Sandberg for coming out to support me. The conditions were auspicious for a spooky evening–it was Friday the 13th, with a full moon. What could possibly go wrong?

After our reading, Thomas McLeod, Executive Director of the Friends of Dalnavert Museum Inc., gave us writers an in-depth, fascinating tour of the house. Each area of the home had its own personality, whether it was the oppressive study of Sir Hugh with its blood-red walls, the lively bedroom of his fencing and pistol-shooting daughter Daisy, the elegance of the sitting room with its piano and extraordinary paper mâché writing set, or the eeriness of the nursery with its nightmarish collection of disturbing dolls. Following the tour, we were left with an embarrassment of snacks and bid goodnight (one staff member stayed on in case we needed him, but we were free to explore the house and write wherever we wanted). The access we were given to this incredible house, and the trust this showed, were nothing short of remarkable. In return, I believe all four of us became fans of Dalnavert that night. 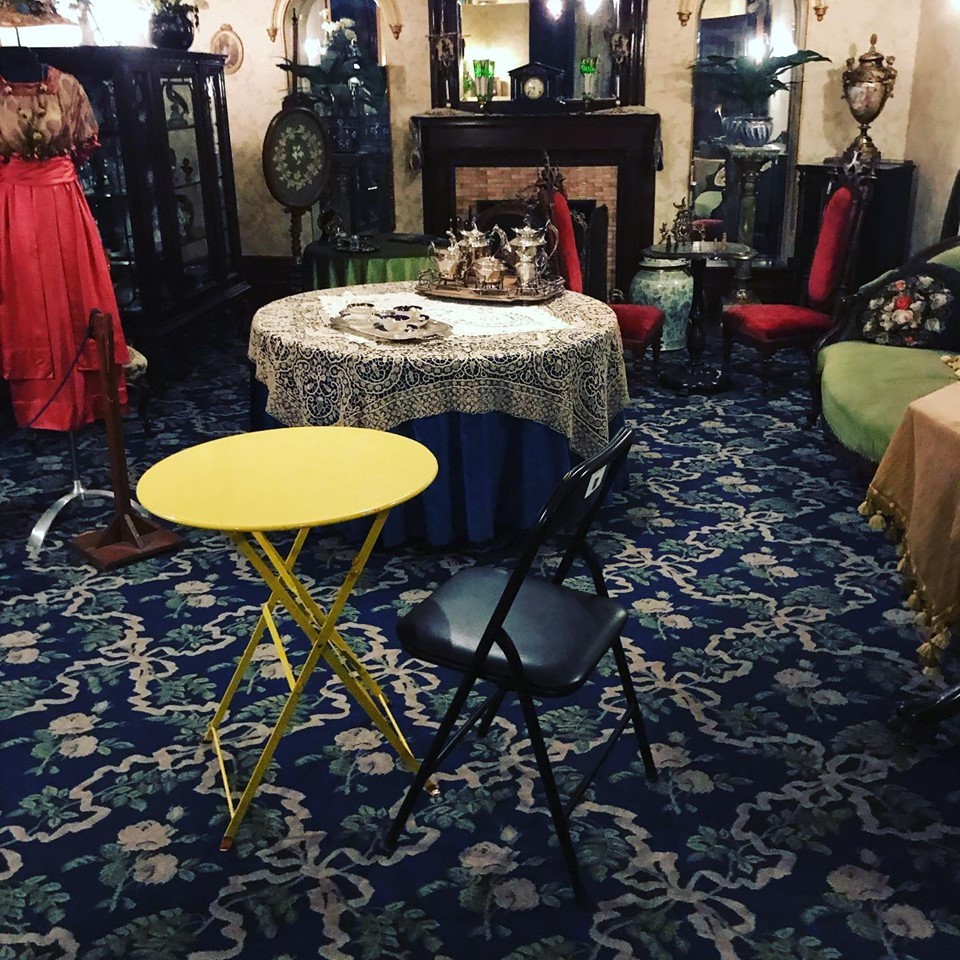 Once it was time to get serious about writing, we split up. Dave Demchuk, author of The Bone Mother, opted for the study. Stoker award-winning short story and screenplay writer Jess Landry tucked herself away in Daisy’s room. Adam Petrash, co-editor of the Parallel Prairies anthology and author of The Ones to Make it Through, settled by the front door, liking his view of the first floor, and I was drawn to the bedroom that had belonged to Macdonald’s son Jack. Though an accomplished athlete, Jack suffered from diabetes, which was nearly impossible to treat or manage in the Victorian era. He died before reaching adulthood–in the very room where I planned to write my story. 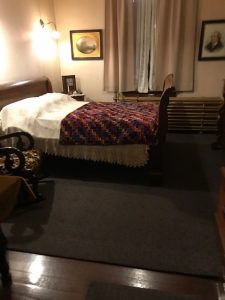 While there were a few disturbing things in the room, including a creepy toy, The Game of Life’s Mishaps (a macabre early version of the modern Game of Life), and Jack’s own stamp book, which apparently could resist attempts to photograph it, I didn’t get any negative impressions from the room. For a while, I sat on the floor by Jack’s closet with my laptop, but after a while, I decided to look out the window.

Just when I’d reached the glass, bam! The closet door flew open behind me with violent force, slamming into my laptop. Both Adam and Jess heard the sound (Adam thought someone had dropped their computer). Thankfully, my laptop was okay. I looked inside the closet, but of course nothing was there. Spooked, I told the others what had happened, and together we tried to recreate the event, opening and shutting the closet door and retracing my path to the window. Nothing happened, which didn’t set my mind at ease. 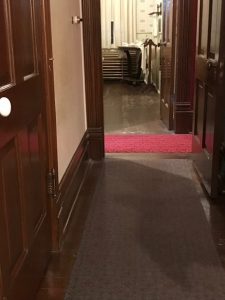 View of room where the closet flew open–the door with the white knob is the closet.

Though it was terrifying when it happened, it didn’t deter me from staying in Jack’s room, and I remained there, either writing or trying to write, until 6:30 a.m. When Thomas arrived later that morning with breakfast, I asked him if anyone else had experienced anything odd with that closet, and he said no, that the staff often used it for storage.

So, my thanks to Jack Macdonald for ensuring I was the only writer who was scared out of her wits at Dalnavert, and also for inspiring the ghost story that will be launched on October 31st, along with the stories of my new writer friends. (Well, Jess was a friend from before, but I’d say we certainly got to know each other better during this experience!)

Have you ever stayed overnight at a haunted house? Is this something you’d be willing to do? Do you have any spooky stories of your own to share? Bonus if they take place at Dalnavert House. 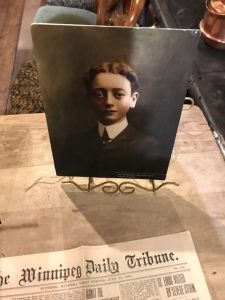 P.S.  My new novel, Those Who Came Before, will be available soon! If you’re in the Winnipeg area, I’d love to see you at the launch on October 30th at McNally Robinson Grant Park at 7 pm.

Photo credit: Photo of the exterior of Dalnavert House by the Friends of Dalnavert Museum Inc. All other photos my own.