Murder at the Movies: The true story behind “The Stepfather” 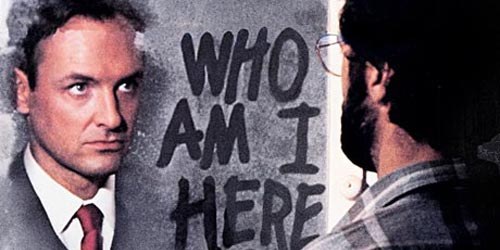 The Stepfather (1987) was one of the first truly chilling horror movies I ever saw. I’ll never forget the opening sequence. Terry O’Quinn calmly wipes the blood off his face, changes his appearance, and walks off into the night, leaving behind his murdered wife and children.

O’Quinn’s stepfather was a man who longed for an idealized version of family life. He’d marry widows with children, seeking perfection, only to murder everyone when they failed to live up to his expectations.

The Stepfather was definitely scary, but the true story is worse. Much, much worse.

On November 9, 1971, a quiet, unassuming accountant in New Jersey committed a horrifying crime. After his three teenage children had left for school, he crept into the kitchen and shot his wife of twenty years in the back of the head. He then climbed the stairs to his mother’s suite, and kissed her before shooting her in the face. 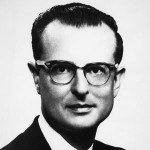 Once he’d put his grisly plan into action, List reportedly felt he couldn’t back out. He cleaned the home, moved the body of his wife to the empty ballroom, where he’d laid sleeping bags on the floor, and then began to write. List stopped the family’s milk, mail, and newspaper deliveries. He sent letters to his children’s schools and part-time jobs, explaining that they would be out of town for an undetermined amount of time to deal with a family emergency. He closed both his own and his mother’s bank accounts.

This god-fearing, deeply religious man then wrote a five-page letter to his pastor, explaining the reason behind the murders. Once that was done, he had nothing to do but wait.

His sixteen-year-old daughter Patricia was the first to come home from school. As she walked inside the house, she was shot in the back of the head. List did the same to his 13-year-old son, Frederick, and then drove to his eldest son’s school to watch him play a soccer game. When they returned home, List murdered his last remaining child, but unlike the others, John Jr. didn’t go quietly. His body jerked as List emptied a 9 millimeter and a .22 into him. John Jr. was shot multiple times in the chest and face.

“I don’t know whether it was only because he was still jerking that I wanted to make sure that he didn’t suffer, or that it was sort of a way of relieving tension, after having completed what I felt was my assignment for the day,” List said.

After more cleaning (List was nothing if not methodical), it was time for dinner. List said that he ate a peaceful, untroubled meal while his murdered family bled onto the sleeping bags in the ballroom. (His mother was left upstairs with a towel over her face, as her body was too heavy for this mild-mannered monster to move.) What many people find incredible is that List then went to bed and “slept like a baby,” as if he hadn’t a care in the world.

The next day, he turned down the thermostat, switched on all the lights in the house, and turned the radio to his favorite classical music station.

No one saw John List again for eighteen years.

His crimes were discovered a month later, when neighbors noticed the house lights were going out one by one and called the police. 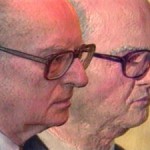 List with the bust that helped bring him to justice.

List was finally brought to justice, thanks to the TV series America’s Most Wanted. The show’s producers had commissioned a bust of what List would look like nearly two decades after his terrible crime. Ironically, List was a big fan of the show, and even saw part of the episode that featured him. He was surprised by how much the bust resembled him, but otherwise he wasn’t concerned. He should have been.

His luck was finally about to change. List was arrested at his accounting job in Virginia when a neighbor recognized the so-called “Bob Clark” as the man the FBI were looking for. Even after police confirmed that “Clark’s” fingerprints were a match for List’s, List continued to insist that they had the wrong man. Confronted with evidence from the crime scene and the police’s knowledge of List’s scars and other unique physical characteristics, he eventually confessed.

Chillingly, List had managed to create a completely new life. He was remarried to a divorcee, Delores Miller, and reportedly happy.

Thankfully the couple didn’t have children.

So what would lead a Sunday School teacher to shoot his children, wife, and mother in cold blood?

List apparently had trouble keeping a job. There was something about him that just didn’t fit, and he was fired or laid off again and again. Meanwhile, the bills kept piling up. He had two mortgages on his Victorian house. He’d been stealing money from his mother’s account.

While he claimed in his infamous five-page letter that the 1970s were a “sinful time,” and that he killed his family to save their souls so they could go to heaven, his financial difficulties likely had a lot more to do with it.

His wife had contracted syphilis from her first husband, and the disease was affecting her brain, leading List to resent her and feel he’d been “tricked” into marrying her too young. He also no doubt resented his overbearing, controlling mother, who insisted on living with them.

Ten months after the murder, the infamous home mysteriously burned to the ground. The ballroom ceiling turned out to be a signed Tiffany & Co. original worth over $100,000…more than enough to have solved the family’s financial issues.

If only they’d known.