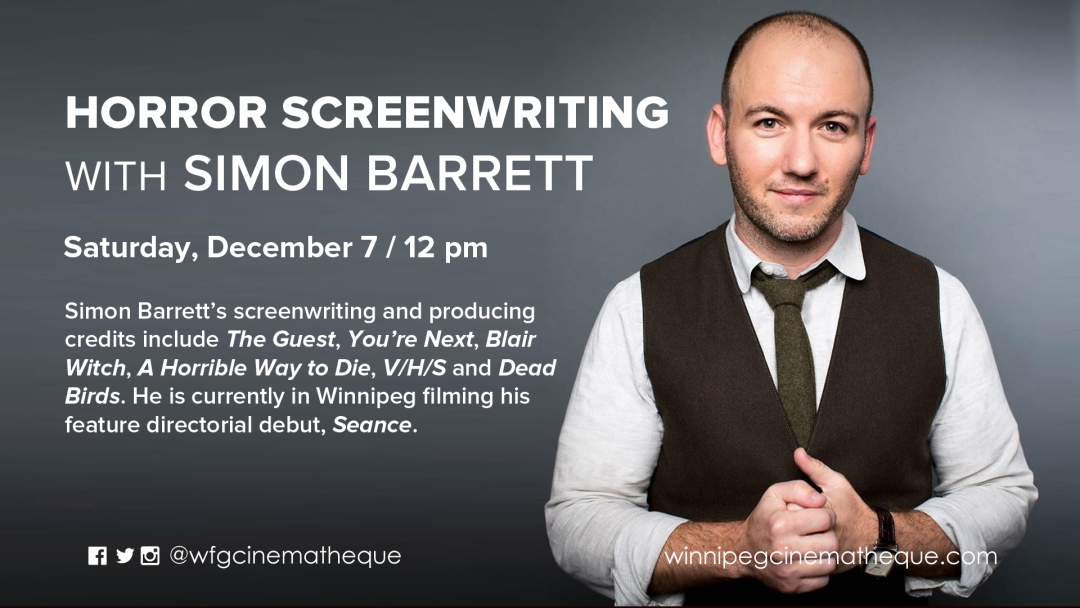 You see, I have no interest in writing screenplays. I hope that one day, some talented person will be the one to turn my books into movies or television programs, and if I’m lucky, I’ll have some creative input. But write them myself? I’d rather not.

What I was interested in was the guy giving the masterclass. (Not in that way–get your mind out of the gutter.) Simon Barrett is the screenwriter responsible for two of the most brilliant thrillers to grace the screen in years: The Guest and You’re Next. Even his B-movie creature features are elevated by his sarcastic sense of humour (I highly recommend Frankenfish). 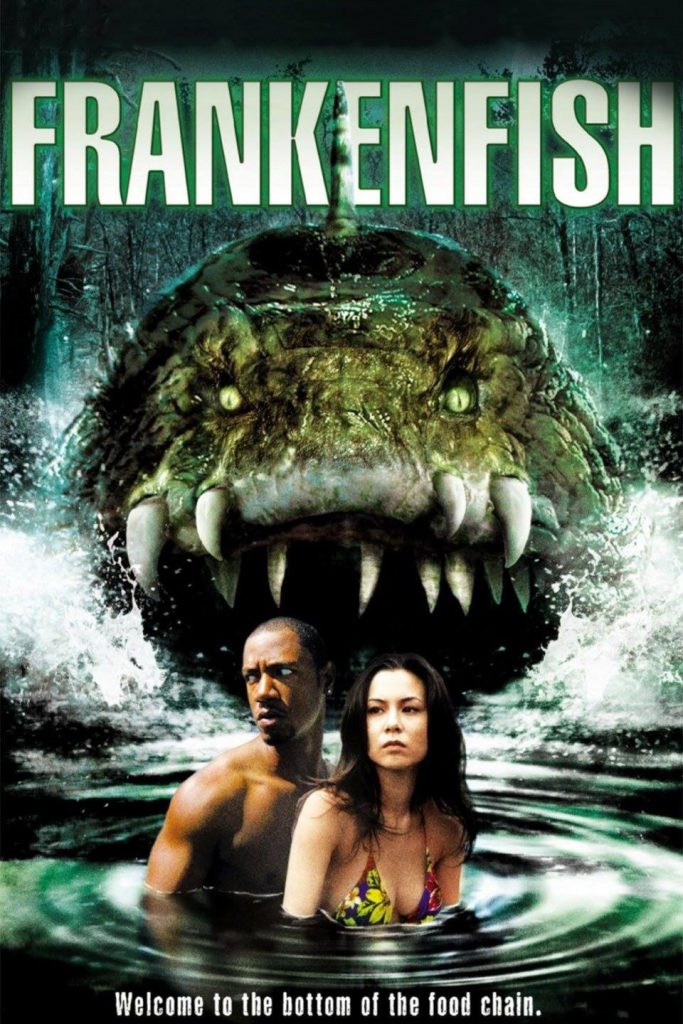 Seriously, how brilliant is that tagline?

You’d never have known that the guy on stage was someone who got to write movies for a living. Wearing a toque and a shy smile, Barrett admitted he was horrified when he discovered his talk had been billed as a “Screenwriting Masterclass.”

I’m just going to ramble about my career, he said, and you can ask me questions.

He also expressed surprise that there were any women in the audience. (To be fair, we were greatly outnumbered.)

In spite of Barrett’s insistence that he would share nothing of value, he did have several pearls of wisdom that would benefit any writer:

“People like characters who are crafty, and who respond to peril smarter than people think they will.”

Who hasn’t yelled at a character not to investigate that weird sound in the basement alone? Exactly.

“We want to see a person make interesting choices, and struggle with adversity in a clever, fun way.”

“Characters are likeable if they are active.”

“Try to do things you haven’t seen before.”

“Just try not to have contempt for your audience.”

“Think of an original way to truly scare people that hasn’t been done.”

“Take inspiration from horrible movies (or horrible books). How do I do this better?”

“What version of this is no one doing that I would like to see (read)?”

“Anything you can cut out of a script (story) you should. If it doesn’t serve a purpose, get rid of it.”

Though Barrett might roll his eyes about being called inspiring, he truly was. When he said his only goal is just to keep working, I admired that so much. It’s way too easy to lose sight of why we do this crazy thing, and doing it in order to keep doing it is just a noble reason as any. It was fascinating to hear about his struggles through a series of dead-end jobs and unsold scripts to get to where he is today.

And for my fellow Guest fans, did you know The Guest was inspired by the Halloween series? Instead of an actual mask, David’s mask is “the semblance of charming human behaviour.”

Best of all, there will be more Simon Barrett and Adam Wingard movies starring Dan Stevens in the future. I can’t wait.

When I asked Barrett to sign my DVDs, I mentioned that I was a writer who would love to collaborate with him one day. He has a dry, sarcastic wit that people don’t always get. “Were you trying to be funny?” is a question he was asked about both The Guest and You’re Next. Of course those movies were meant to be funny. This really resonated with me, thinking about the reviewers who thought Jackson, a protagonist in the GhostWriters series, was an asshole instead of realizing he was sarcastic.

“Sure, send me something,” he said. “I’ll read anything.”

I don’t know if he meant it or was just being polite, but beyond social media accounts he apparently never checks, I’m not sure how to get a hold of him. I don’t want to be one of those writers. However, if it ever happens, I’ll die happy. At least I tried. And got my DVDs signed like a proper fangirl. 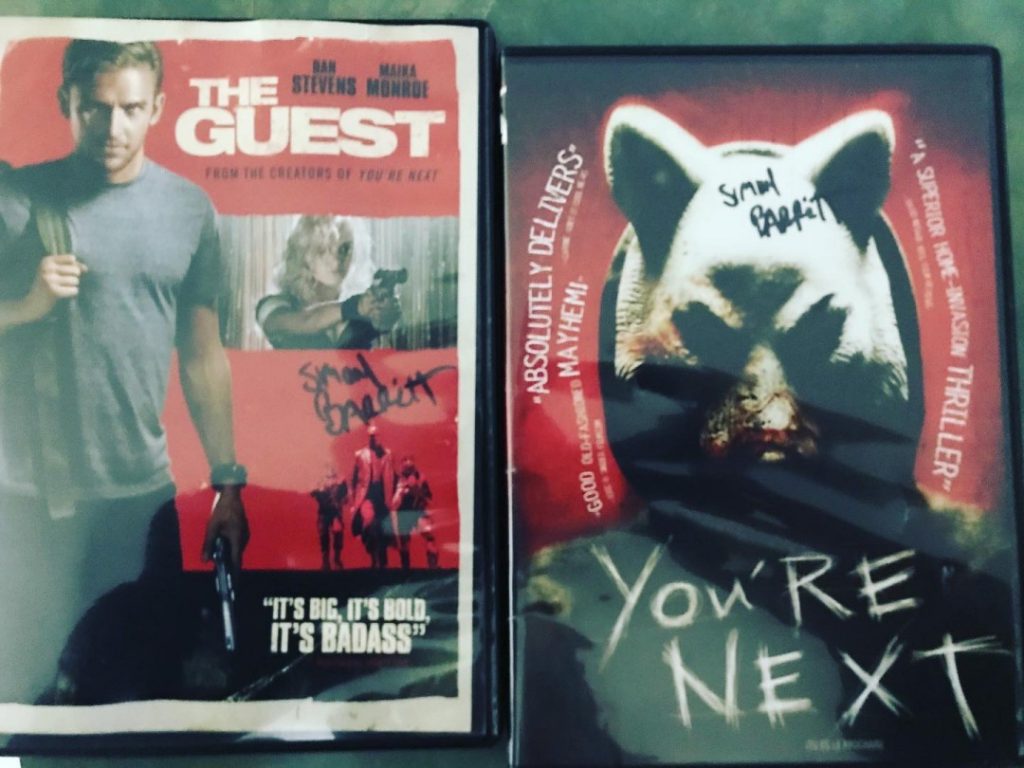 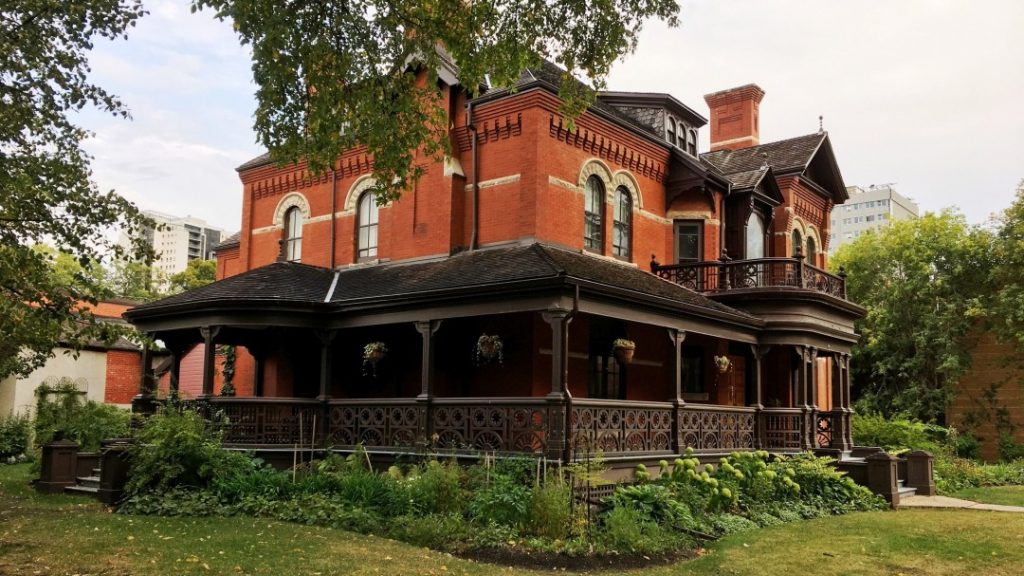 Remember how I stayed overnight at the haunted Dalnavert House and had a creepy encounter? Of course you do! Well, I’ve got some good news. As I was writing the required short story for the Fantasmagoriana chapbook, I realized it had the makings of something much bigger. Or at least much longer. The story was meant to be a novel.

After I finished the short version, I contacted Don D’Auria, my editor at Flame Tree Press, and pitched it to him. Once I fleshed out the idea, so to speak, he was game, and then pitched it to his boss. Long story short, the ink is now dry on the digital contract. I’m so excited. This is the very first time I’ve been paid for work I haven’t yet done. Of course, this means that I actually have to write it now. But that’ll be fun, right? Right?

Happy to announce that my Audible Original thriller, Dragonfly Summer, has a release date–February 13th. If you’d like to be an early listener, and receive a free copy in exchange for a review and spreading the word, either on social media or your blog, please let me know.

The perfect next listen for fans of Wendy Walker and Shari Lapena, Dragonfly Summer is a gripping thriller that asks: What happens when the past comes back to haunt you?

Jo Carter never thought she’d return to Clear Springs, Minnesota. But when the former journalist receives a cryptic note about the disappearance of her friend Sam twenty years before, she’s compelled to find out what really happened. During her investigation, she learns another high school friend has died in a mysterious accident. Nothing is as it seems, and Jo must probe Clear Springs’ darkest corners and her own painful and unreliable memories to discover the truth – and save herself from a killer who could still be on the hunt.

Deliciously twisty and suspenseful from the first minute to the last, Dragonfly Summer proves that no small town’s secrets can stay buried for good.

Happy New Year! I hope you found Simon’s pearls of wisdom useful. May 2020 be a successful, productive year for us all, one in which we hear more good news than bad. Fingers crossed.