Haunted Travel: The ghosts of Shanghai 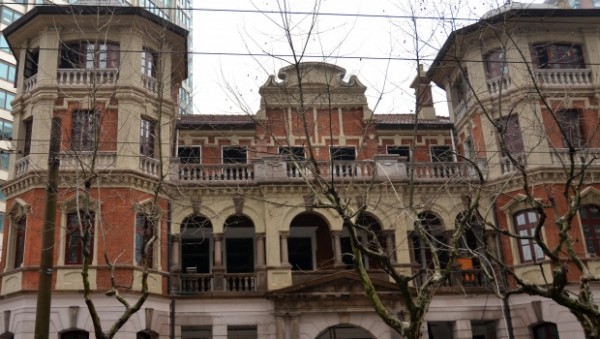 If you’re going ghost hunting, you can’t do much better than China. All that history, the legends, the warriors and ruthless emperors. And let us not forget the dragons.

China is one of my favourite places, so I was excited to visit my friend Niki and her family in Shanghai last week. Niki generously offered to take me on a tour of haunted Shanghai, which I eagerly accepted.

One thing I quickly learned: if you find an old building in Shanghai, there’s usually a creepy story behind it. The city is famously progressive and modern; the old is always being torn down to make way for the new. So beware those decrepit, mouldering walls! They just might have a monster inside.

Our first stop was the Qiu Mansion, pictured above. This once-grand estate was one of two owned by two brothers who moved to Shanghai in the hopes of finding a better life. They found one after World War II ended when they discovered a warehouse full of paint cans. The price of paint had skyrocketed, turning the brothers into overnight millionaires. And were the brothers classy about how they spent their money? Not at all.

They stocked up on exotic animals like tigers, crocodiles and peacocks (pity the poor peacocks). The Qiu brothers lived the high life until they disappeared with no explanation, leaving no heir. One of the mansions was razed, while the one in the photo was supposed to be moved.

However, the ghosts of the ill-fated animals had other ideas. Many workers claimed to have been attacked by phantom beasts, and had to be rushed to the hospital with bite marks. No living animal was ever found on the grounds, but a woman spotted a dragon-like creature on a construction crane. Another worker tried to kill his boss with a hammer, swearing that a “lizard-like creature” had forced his hand.

Work on the site reportedly stopped forever at that point…or did it? When we were there, we could clearly see workmen moving around the upper floors. Hopefully they don’t run into any tigers.

Unlike the spookiness of the Qiu Mansion, Jing’an Park isn’t the slightest bit scary. It’s quite lovely, in fact. But not everything is as it seems…those gorgeous flowers could very well be fertilized by the bones of the dead.

You see, the park was once a cemetery for foreigners that opened in the 1890s. In preparation for the new park, the bodies were exhumed in 1955, but a lot of gravestones had been stolen by then. It’s quite likely some of the corpses remain, and there’s been several reports of water spirits grabbing anyone unlucky enough to get too close to the park’s many ponds. 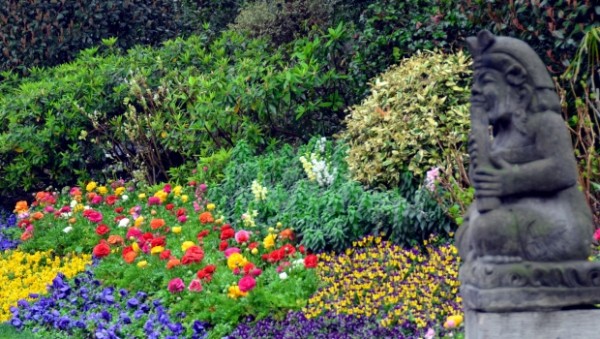 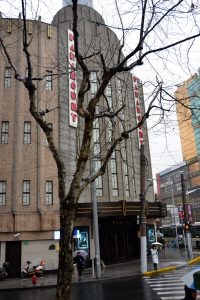 Once the place to see and be seen in Shanghai, The Paramount has been haunted by persistent tales of a ghostly dancer since the 1940s. In 1941, a young woman named Chen Manli refused to dance with a Japanese officer. Another man, clad in black, promptly shot her for this offence. The poor woman died instantly.

Several people who work there have seen the ghost dancing slowly by herself. We did try to get a glimpse inside this majestic dancehall, but a glimpse was all we got before we were shooed back out on the street. Too bad–the interior is gorgeous. 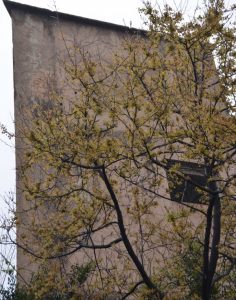 Remember what I said about old buildings in Shanghai?

This spooky, charred structure was a thriving hotel in the 1980s. According to local stories, an abusive boss locked a young waitress in a room as punishment for spilling tea on a customer. Which would have been bad enough, but of course a fire had to break out, killing the woman.

Attempts to raze the building were abandoned after construction crews and potential new owners kept fleeing without explanation. Neighbours have reported seeing the face of a young woman staring gloomily out the window you can see in the photo, even though the building remains empty. Of all the places we visited, this one was by far the creepiest.

To wrap up our tour, we visited a ritzy shopping mall that used to be a children’s hospital. Legend has it that several people commit suicide in this shopping centre every year.

I also managed to snap a quick photo of the infamous dragon pillar on the Yan’an Elevated Highway, 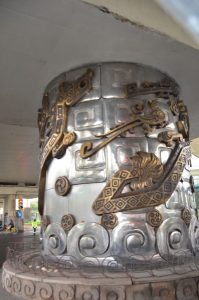 which is said to rest on the body of an actual dragon.

Have you ever visited China? Heard any of these creepy stories before? What’s the spookiest place you’ve ever been?

If you liked this post, check out this one about my visit to a Chinese ghost city. My upcoming novel, City of Ghosts, is a eerie love letter of sorts to this remarkable place. If you’d like a free copy in exchange for a review, please let me know.