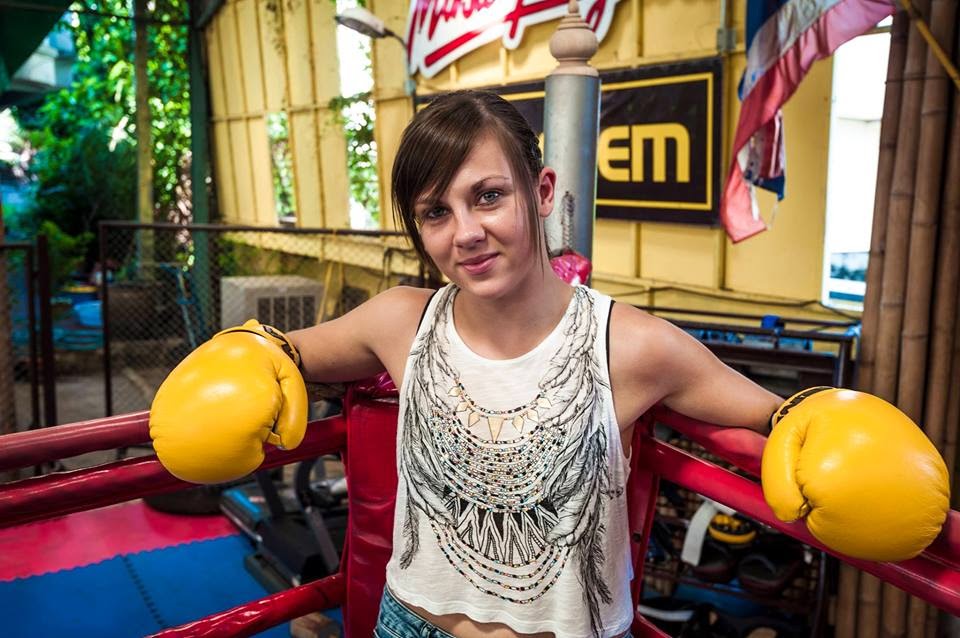 I’m thrilled to be able to share a bit of Emma’s story with you. Emma is a 25-year-old Brit from Poole, Dorset who fell so in love with Muay Thai that she moved to Thailand to train full time.

I’ve wanted to train in Thailand for a while, and I’m fascinated by brave women like Emma who leave behind everything they know and love to make it a reality.

Please welcome Emma and give her some blog love in the comments.

1) How long have you been training in Muay Thai and why did you start?

I first started training in late 2010. I was a bit of a gym addict, and, having already been to Thailand for a short visit a few years prior, I was curious about Muay Thai. I’d always wanted to try boxing, but having never tried any combat sport before, was far too intimidated about the idea of stepping into what I (perhaps irrationally) imagined to be a gym full of experienced and unwelcoming men on my own as a complete beginner. There was something about Muay Thai that gave me the final push to just go and do it. I scoured my local area for gyms, but it wasn’t until I arrived back in Thailand than I built up the courage (to train). No sooner had I got there than I jumped straight into training, although I had no intention of fighting at that time. It just went from there, so I’m excited to see where it will continue to go.

2) Did you face any challenges in the beginning?

In the early stages, my parents were not entirely enthusiastic about me fighting. Understandably, they didn’t feel comfortable with me doing it, although they never told me not to. The subject was never really raised between us and it wasn’t something that we talked about, just something that I did that they were aware of. It was difficult at that time because it was so alien to most of my friends and family. The thing that was consuming my life was something that I couldn’t share with them. When I would email my mom to tell her I had a fight coming up, the response would be simply ‘OK’. It wasn’t until my fifth fight, which I won by knockout, that my parents finally became comfortable with it. I think that made them realize I could do it. Later on that year, I fought in England for the first time and my parents came to watch and support me, which meant a lot to me. My fights and training are now a regular topic in our weekly Skype chats.

3) What was your life like before you moved to Thailand?

From a young age, I had always planned to travel. I was tempted to go before university, but I had a feeling that if I did, I wouldn’t go back to education. Getting a degree was hugely important to me, so I decided to study first. With this in mind, I worked part time all the way through school and university in order to ensure that I would have enough money to go as soon as I wanted to. I graduated with first class honours in Enterprise in Product Design before immediately setting off on a backpacking trip that would take me around Thailand and South Africa. I was determined to get out, travel and have new experiences before I had any chance to become trapped by the social norms of careers, houses, cars and relationships. It ended up being the best decision that I’ve ever made. 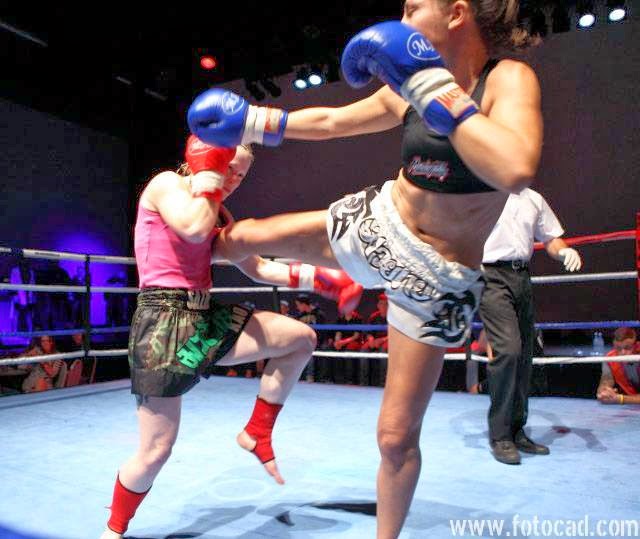 4) What made you decide to move to Thailand to train?

After travelling, there was never really any question about me moving here. Since I had planned to go travelling from early on, I was careful to ensure that I had no ties at all to hold me back. This meant that the move was a smooth one. It felt like the most natural thing to do. I just did exactly what I wanted to do.

5) What was the most difficult thing to give up?

I don’t really see myself as having to give up anything. Instead, I feel incredibly privileged to be able to do the things that I love every day while also being in a place that I love. Of course, the lifestyle that I have is demanding and sometimes becomes too much for me. I keep a constant, fight-ready training schedule while working six days a week. The one thing that is definitely lacking in my life is time for socializing, but I really love the life that I have right now and I don’t think I would have it any other way. I do sometimes feel frustrated about never having a break or any time off. However, when I do get the chance to take a day off work, I end up using it for training or fighting. It wouldn’t feel right to do anything else.

6) How long have you been in Thailand and what’s been the biggest challenge?

I’ve now been here for three years. As most people do, I absolutely fell in love with Thailand from the beginning and couldn’t imagine leaving. While that feeling has remained with me throughout my time here, I have had my ups and downs along the way.

I can say without hesitation that the biggest challenge that I’ve faced has been loneliness. I moved out here alone and am only able to visit once a year, and have had some rather low moments when spending Christmases or birthdays alone. Also, as almost everyone around me is living a temporary lifestyle, I’m constantly having to adapt to changes in my social circle as friends come and go. My demanding schedule of training, working and writing leaves me almost no time to make new friends or spend time with existing ones. While this is definitely difficult at times, it is the choice I have made by committing myself to the things I’m passionate about doing. I see it more as an investment in myself, and I’m confident that it’s worth it. 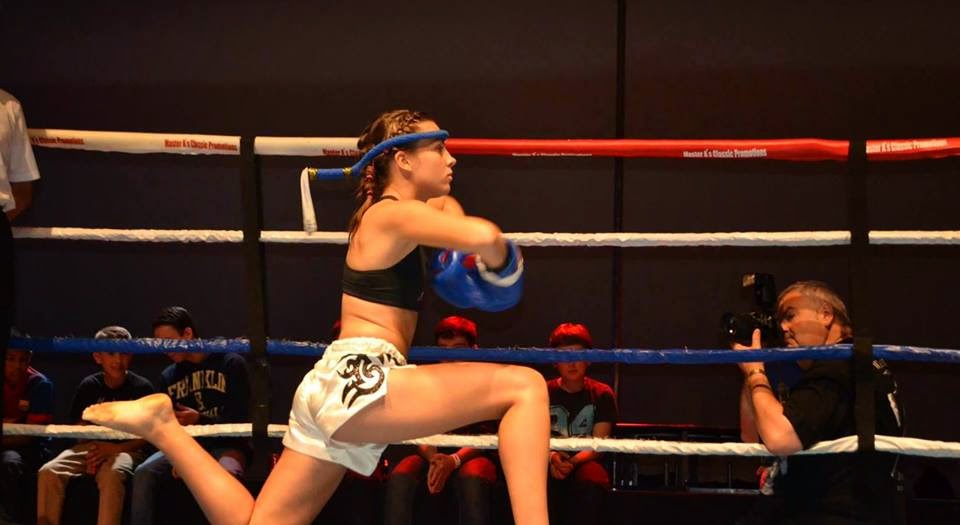 7) How long do you intend to stay?

I try not to make too many plans because they always seem to change. I originally planned to be here for six months, and now it’s been three years. I planned to work as an English teacher just as a way of staying in Thailand, but it ended up being a huge passion of mine. I planned to have only one or two fights, but it’s now thirteen. People often ask me what my plan is or when I intend to stop or to go home, and my answer is always the same: for as long as I enjoy it, this is what I’ll do. Each time I say it, I feel like it’s a luxury to be able to do so without any constraints or obligations. I remind myself of how fantastic that is and realize I should be in no hurry to give up that position.

Aside from my family and friends, of course, the thing that I’ve missed the most has definitely been food! I often fantasize about food that I’m never able to have, and then make mental lists about what I will eat when I do go home. That being said, the food here is fantastic and I would definitely miss it if I went home. As humans, we always seem to want what we can’t have, so I try to appreciate what I do have in the moment. That doesn’t stop me from wanting some chocolate or my mum’s cooking, though!

9) How do you think women in Muay Thai are viewed?

I think that now is a really promising time for women’s Muay Thai. It seems to be really taking off, with organizations like Awakening doing a lot to promote female fighters, more women blogging about their experiences, more female bouts as main events, more women taking up Muay Thai and more of them coming to Thailand to train and fight. There is more support and encouragement for women in Muay Thai now than there has ever been. I’m seeing constant progress and I’m really excited to be part of it all right now. 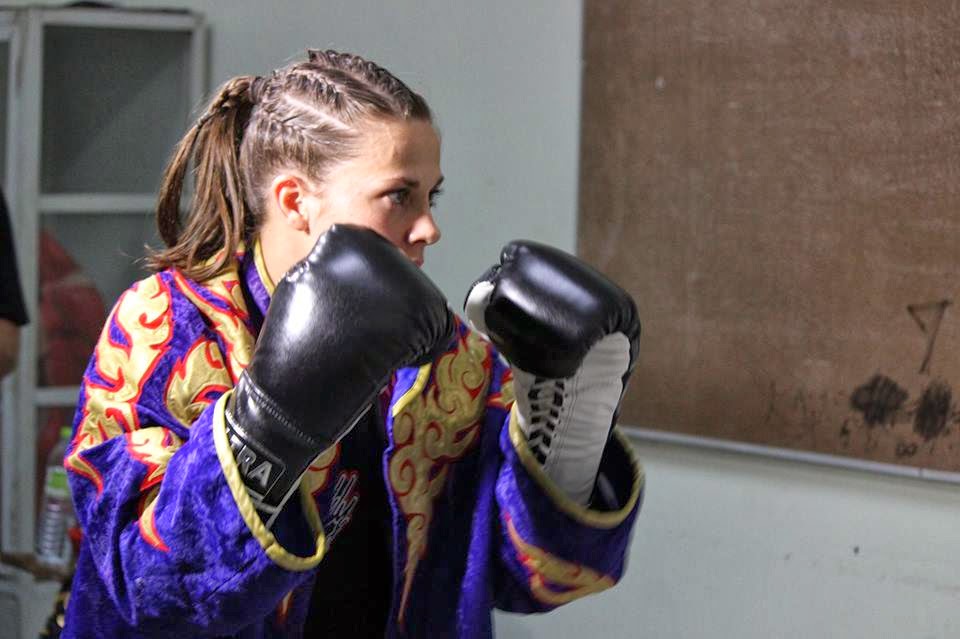 10) Why are you so passionate about Muay Thai, and what else is on your bucket list?

I think the thing that makes me so passionate about Muay Thai is that it constantly forces me to learn and grow. I have always been very academic, so could have easily slipped into a career after university, but that idea didn’t seem challenging enough for me. I wanted to do things that would take me out of my comfort zone, and I do that every time I get into the ring. Rather than a bucket list, I made a list of things I want to do before I’m thirty, as I wanted to do all of those things before then instead of just dreaming about them. Funnily enough, I recently had to rewrite it because I had managed to achieve all of them. It included things like backpacking by myself, doing the highest bungee jump in the world, cage diving with Great White sharks, going on an African safari and becoming an English teacher, a published writer and Muay Thai fighter. The newest one includes things like climbing Mount Kilimanjaro, setting up my own business, and skydiving. You have to keep life interesting! More than anything, I just want to do the things that make me happy. 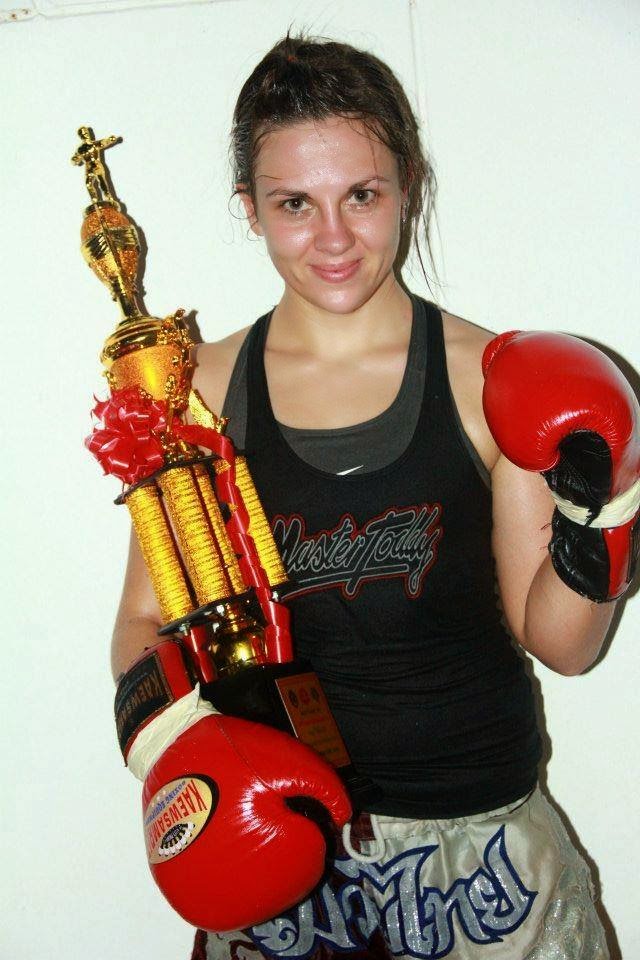 Thanks, Emma! I hope you’ve found Emma as inspiring as I do. Feel free to ask her questions in the comment section.

To learn more about her adventures in Muay Thai, check out her blog Under the Ropes.