Where Did the Time Go?

People always talk about how they discovered their “calling”. But for me to say that I discovered writing would be akin to saying I discovered breathing. Writing, like taking in oxygen and giving bear hugs, was just something I always did.

My first “novels” were picture books of an imaginative kind, since they detailed the adventures of a family of fish. This fish family ate commercial cereals, enjoyed television programs (especially the nightly news) and…lived in fear of a bear who stalked them under the ocean. This particular flight of fancy can be explained by the fact that I owned two stencils at that time: a bear and a fish. I didn’t let those creative limitations stop me! 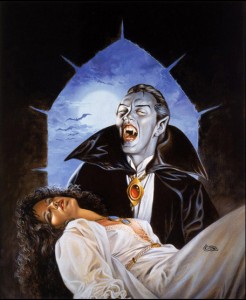 I’ll never forget the thrill of my first published story, a horror tale about vampires. I was eight years old when I wrote it, and had just learned the word “devour”. I was quite taken with this new vocabulary, so the vampires were busily devouring everything ( or, more aptly, everyone) in sight. Looking back now, I’m surprised the local paper published such a morbid piece, especially since it was written by a Grade Four student! If the same happened today, I’d probably have a school psychologist or two keeping an eye on me….

As I grew older, my writing efforts matured. I have a young adult novel hidden away somewhere about a group of Grade Six students who seek playful revenge on a nasty teacher (written while I was in Grade Six, of course). My adolescent effort was Never Say Goodbye, which opens with the protagonist committing suicide. Then it goes back in time to show when Charlie was so happy with his three friends. Of course, every main character dies by the end of the book. Talk about adolescent angst! (It’s no accident that S.E. Hinton wrote her equally-cheery The Outsiders when she was just seventeen.)

I was still pretty young when I first heard about Gordon Korman. I loved his books, especially This Can’t Be Happening at Macdonald Hall. They made me laugh until my stomach hurt. But the thing about Korman that really intrigued me was that he published his first book at the ripe ol’ age of fourteen. Fourteen! That was ancient! I had years to beat his record.

Sadly, I never did. For one thing, I didn’t have the helpful teacher with links to the publishing industry. And I didn’t have the perseverance of Korman to finish a novel at that age. By sixteen, I did, but I’m more than happy not to have Never Say Goodbye out on the shelves with my name on it.

So I missed that great deadline. No problem, I thought. I’ll be published by twenty. When that milestone passed, I promised myself thirty. Still no book. And now forty is looming too close on the horizon for comfort. It scares me a little, I have to admit.

I was never one of those kids who felt like the summer lasted forever. I was always one of those “old people in little bodies” who was so conscious of the passing of time. Still, I have to wonder…where did it go? I wrote that vampire story about an hour ago, and now I’m nearing forty, still yearning to meet that very first goal….

To be published at a younger age than Gordon Korman was.

I can still make it. My God, there’s just tons of time left….