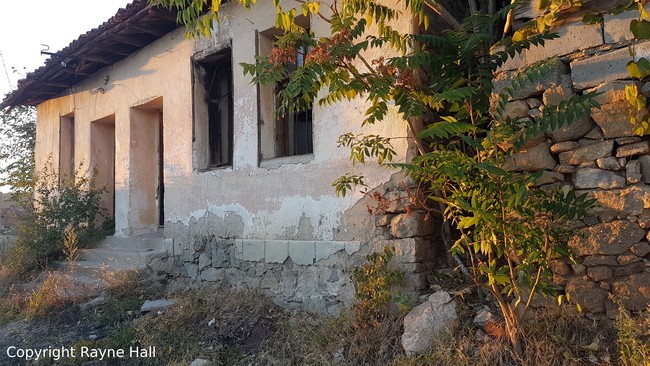 Welcome to author Rayne Hall, who joins us with a guest post about Bulgaria’s haunted homes.

As a writer of creepy ghost and horror stories, I like to visit spooky places for inspiration. Here in Bulgaria, I find a wealth of abandoned, derelict houses where I can soak up the atmosphere. Eerie, creepy and romantic at the same time, they feed my imagination.

Standing inside, surrounded by the detritus of people who once lived here, I listen to the sounds of insects buzzing, of wind-driven branches scraping against the outside walls, of dogs barking nearby.

I hear my own footsteps crunch on concrete rubble and broken roof tiles.

Bulgaria has a great density of abandoned homes. Whole settlements have turned into ghost villages. Even in otherwise thriving neighbourhoods, houses stand deserted, their gaping windows staring at passers-by. 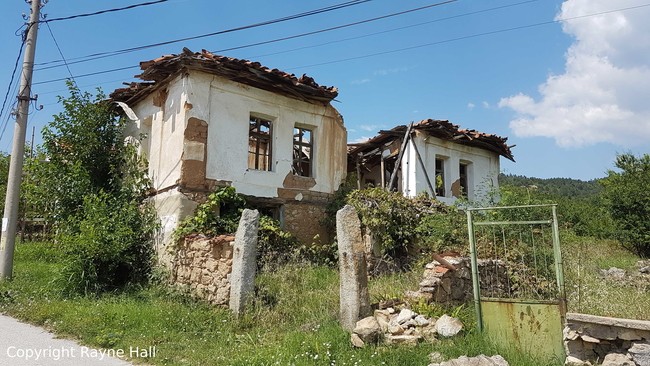 Why are so many houses empty? Why don’t they get snapped up, restored, turned into desirable residences? Five causes carry the combined blame:

1. The old inhabitants die. Their young descendants, following career opportunities, have moved to big cities or abroad, and have neither the time nor the resources to care for the rural property. They offer it for sale, but since there are more houses on the market than buyers looking to purchase, many remain unsold. With every year, the chance of finding a buyer diminishes. After decades of neglect, they fall into such a state of disrepair that they can no longer be restored.

2. During the communist era, Bulgarians weren’t allowed to own more than one private property. If a family had two houses, they had to give one up. Most chose to keep their city home and surrender the rural house for which they had little use. While the authorities allocated some of these village houses to new residents, others remained unused. By the end of the communist era, when many properties reverted to their original owners or their heirs, those houses had already experienced four decades of neglect. Restoring and maintaining them would take time and money – and the new owners don’t want to pump cash into a remote, dilapidated house for which they have no use. So the already-derelict buildings continue to decay.

3. Bulgaria’s complicated inheritance laws state that if a person dies without leaving a will, all descendants inherit – and that a house can only be sold if all or most of the owners agree. This may sound reasonable… until you remember that after the fall of communism, the ownership of many buildings reverted to whoever had owned them in pre-communist days. Those people are long dead, leaving several generations of heirs. Many heirs live abroad, have no interest in a decayed rural property, or simply cannot be located. Getting them all together for a unanimous or legal-majority decision is impossible. (Disclaimer: I’m not a property lawyer. What I give you here is a layperson’s summary. The reality is more complicated.) Thus the houses keep on crumbling, with no hope of rescue.

4. During the 1990s, Bulgaria’s decade of chaos, many people invested in real estate, spending what funds they had on building new houses. With the banking crisis and hyperinflation, many found themselves without the funds to complete the construction. The country is studded with half-finished, bare-brick houses and grey skeletons of concrete frames.

5. Some houses are haunted or cursed. Nobody wants to live there and become the ghost’s next victim. You may smile at the local superstitions… but will you still smile when you learn that everyone moving into that building has met an untimely, gruesome demise? Can you laugh it off when you discover that these events are documented by police reports? Of course, you may put it down to unhappy coincidence – but can you be certain?

A house in my neighbourhood bears a curse. Over a hundred years ago, a young bride who lived here was buried alive. She managed to claw her way out of the grave at night and return home…only to be believed ‘undead’ by her in-laws, who promptly buried her again. The poor woman cursed all who lived in that house, and ever since, no resident has survived for long. The body of the last legal inhabitant was found dismembered in the freezer, and the squatters who moved in afterwards soon died in a horrific car crash. Unsurprisingly, nobody seems keen to buy the house. So it stands, waiting in silence for an ignorant purchaser who has not yet heard of the curse.

From the outside, the houses often look romantic and peaceful, especially when washed in the golden sunlight of a late afternoon. Stone walls stand in solid defiance, while mud-brick walls have eroded, washed away by decades of rain, until they look like lumps of molten honey-coloured candle wax. 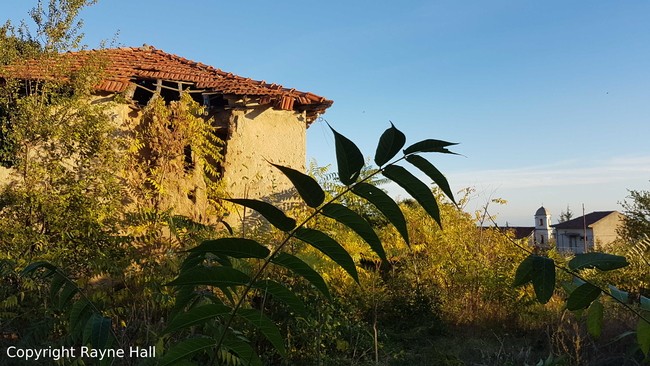 Cobwebs stretch in the windows where some chunks of glass still stick in the wooden frames. Gnarled ancient vines cling to the crumbling facades, still bearing clusters of grapes. In the orchards, old trees still bear quinces and plums. Nobody collects the harvest, so the fruits fall to the ground and rot, their sweet-fermenting smell an irresistible lure to wasps.

Inside, the floors are strewn with rubble – broken roof tiles, crumbled brick, concrete and dust, punctured with modern debris like plastic soda bottles, goat droppings and bales of half-rotten straw. 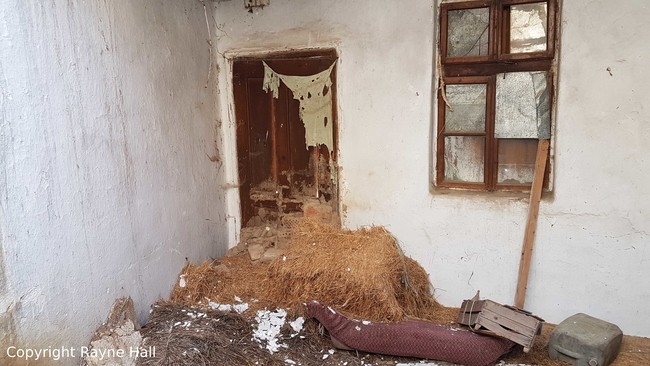 Built-in cupboards are set deep into the thick walls and still bear wooden shelves. Once these held either everyday possessions or cherished religious icons, but of course those artefacts have long been plundered, and only the bare boards remain. Here and there, torn scraps of white-lace curtain still stretch like ghostly drapes across the windows.

The roofs have caved in, with only a few charred beams still standing like a skeleton’s darkened ribs, so the natural sunlight streams in and illumines the scene.

Broken furniture tells of how people lived here decades ago: couches and armchairs, their large-patterned 1960s upholstery squatting on the ground without the wooden legs and arms, a remnant of a cast-iron stove ornament sticking out from between shattered terracotta tiles. 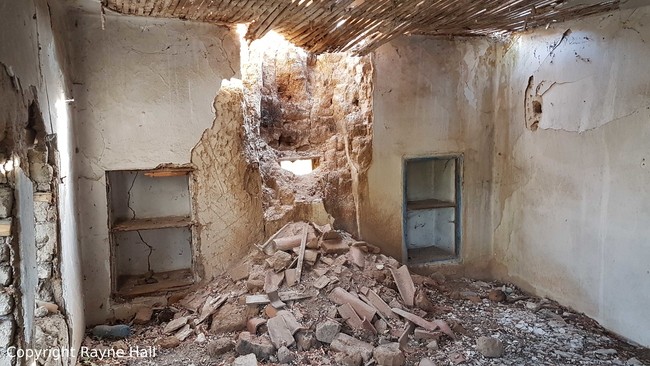 Electric fittings and light switches have mostly been ripped out, leaving holes in the walls. Swallows have glued nests under the ceilings, and cobwebs stretch in corners and shiver in the autumn winds.

As a writer, I find these locations inspiring. I have already gathered material for several spooky stories…of ghosts and vampires, of travellers lost and sheltering in one of those eerie homes, of monsters and murderers and creepy mysteries. I plan to publish them as a collection of creepy tales set in Bulgaria.

My companion and writing muse Sulu – an abandoned cat I adopted from an animal-rescue shelter – often comes with me into these creepy buildings. Exploring weird places gives him a thrill. He sniffs in every corner and at every shard, and balances on the stark roof beams overhead, looking down at me.  When he’s finished his investigation, he finds a spot to relax – perhaps a windowsill, which gives him views of both the interior and the world outside. 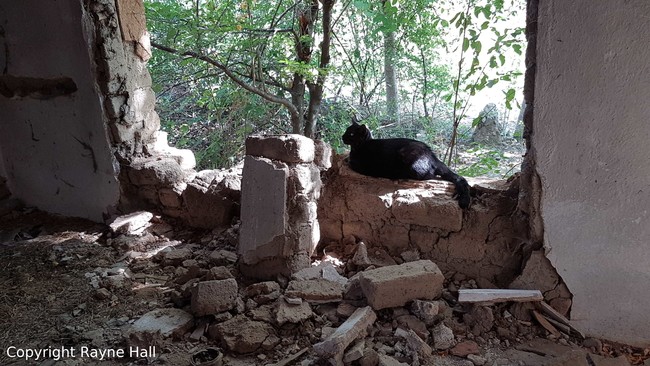 Cats are believed to be able to sense the presence of ghosts and supernatural entities, displaying distress signs like raised hairs, stiff fluffed-up tail, and staring frozen at something unseen. Judging by Sulu’s behaviour, most of the places I visit are ghost free.

However, remember the house I told you about, with the buried-alive bride and the dismembered corpse in the freezer? Whenever we approach that house, Sulu makes distressed mewling sounds, and absolutely refuses to come with me into the grounds, let alone into the building. Perhaps he senses something that I don’t. 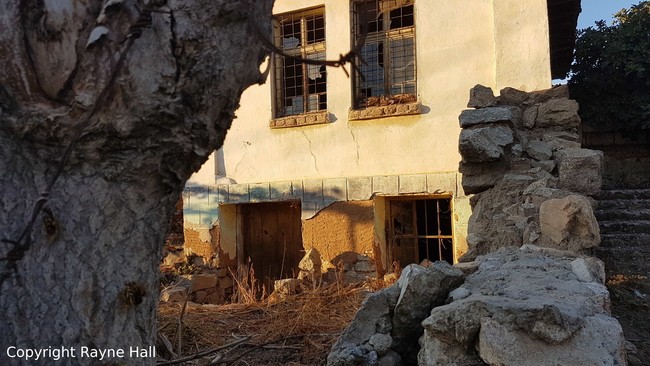 My Bulgarian neighbours agree with my cat. Nothing will make them enter that cursed house either. When they see me going in again, notebook in hand, they try to hold me back with shaking hands.

If I invited you to follow me into that house and explore its dark insides, would you come? 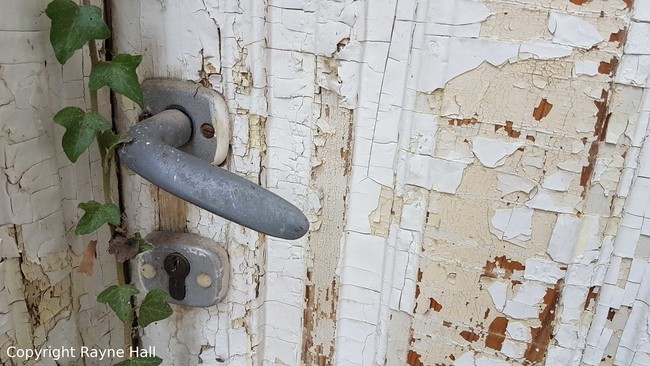 Rayne Hall writes fantasy, horror and non-fiction, and is the author of over sixty books. Her horror stories are more atmospheric than violent, and more creepy than gory. 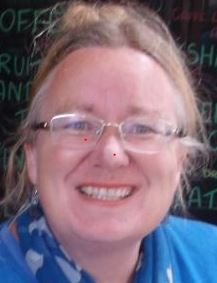 Born and raised in Germany, Rayne has lived in China, Mongolia, Nepal and Britain. Now she resides in Bulgaria, where she enjoys walking in the foothills of the Sredna Gora and visiting ancient Roman ruins. The deserted, derelict buildings from Bulgaria’s communist period provide inspiration for creepy ghost and horror stories.

Her lucky black cat Sulu, adopted from the cat rescue shelter, often accompanies her on these exploration tours. He delights in walking across shattered roof tiles, balancing on charred rafters and sniffing at long-abandoned hearths. 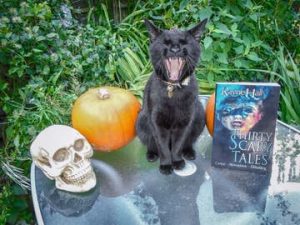 If you want buy a collection of Rayne’s creepy short stories as an ebook or in paperback, Sulu recommends his favourite, Thirty Scary Tales.