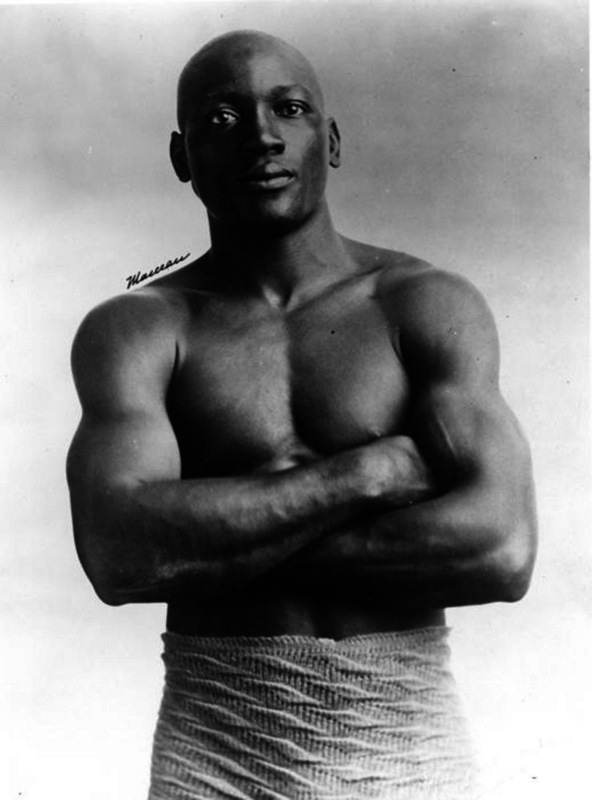 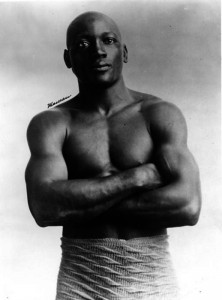 Over the weekend, as I searched for movies to inspire me (and I’m sorry–The Fighter didn’t cut it. I was very disappointed in that one), I ended up watching Unforgivable Blackness, a PBS documentary about Jack Johnson.

In case you don’t know, Johnson was the first African-American to win the title of Heavyweight Champion of the World. He paid dearly for his success.

Johnson started boxing in the late 1800s, and from the beginning, he exhibited a style that most fight fans hadn’t seen before. He waited for his opponents to make a mistake, and then capitalized on their errors, adopting a more defensive approach than was seen in his day. As Johnson defeated all of the eligible black and white opponents, he began to demand a shot at the title. Unfortunately, the so-called “Heavyweight Champion of the World” was able to avoid facing Johnson in the ring by saying he would never fight a black man.

Thankfully, Tommy Burns finally bowed to public pressure, and lost to Johnson in the fourteenth round. But this still wasn’t enough for a racist public, who said that since the former champion James J. Jeffries had awarded Burns the title but hadn’t actually lost it in combat, Johnson had yet to defeat the “real” champion. Jeffries also played the racist card to avoid fighting Johnson–his awarding of the title to Burns was a blatant slap in the face. In 1910, Jeffries finally came out of retirement to fight Johnson, who knocked him down in the 15th round. The fight was stopped to prevent the public from seeing Jeffries get knocked out by a black man. Perish, forbid.

Johnson is widely regarded to be one of the greatest boxers of all time. His fight record is staggering: 104 fights, 73 wins, 40 knockouts, 13 losses, 10 draws, and five no-contests. (And this is in an era when boxing fights could last 40 rounds!) He was an exceptionally brave man who weathered constant death threats, riots that followed his wins against white fighters, nuisance arrests, and more. His opponents frequently taunted him with racist slurs throughout his fights…until he shut them up. Like Muhammad Ali who would follow, Johnson refused to “live as a slave” and was highly outspoken and clever. He dated whomever he chose, including white women, which led to his arrest on trumped-up charges in 1912.

One wonders how different Johnson’s life would be if he’d been born today, and how he would have felt to see so many great African-American fighters win the title he fought so long and hard for–not in the boxing ring, but in the political arena, hoping for a chance to fight at all.

During the documentary, boxing was referred to as a great symbol of masculinity, and it reminded me how hard women have had to work to be accepted in the sport. Even though I haven’t faced anywhere near the same amount of adversity Johnson did, I have had to struggle against the sexist, demeaning attitudes of other fighters and even gym owners. I’ve learned to leave the coaches who refused to believe in me and my potential and not look back. Unlike Johnson, I believe I’ve found a home in this sport. I only wish he could have had the same opportunity.