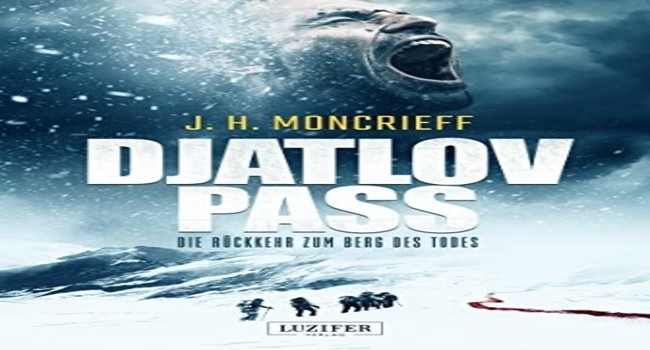 Yesterday I had one of those “I feel like a real author” moments. It might surprise some of you to discover I rarely feel this way. Real authors are reviewed in major newspapers, have six-or-seven figure book deals, movie options, and hardbacks in all the big bookstores, after all. Their books are translated into every language, making the NYT list is a given, and each new release already has thousands of reviews.

I’ve set myself up a bit, haven’t I? Nevertheless, I got to experience a little bit of the Real Author euphoria when I discovered the German edition of Return to Dyatlov Pass is available for preorder. This is the first time one of my novels has been translated, and the cover is awesome. I’m beyond thrilled. For those of you with German friends and family, I’d be honoured if you’d help spread the word.

Speaking of Dyatlov, the book appeared on another “best of” list, which I also discovered yesterday. Thanks to Brian Fatah Steele for including me with such esteemed company. It wasn’t that long ago (try 2017) since I was never included on such a list, so I’m always moved to tears when it happens.

Fans of the book will be happy to know that Nat, Dyatlov’s protagonist, is returning in my next Severed Press novel, Valley of the Sasquatch. I’m planning for a spring release. (Igor may be making a comeback as well.)

As discussed in a previous post, I’m starting a vlog this year, and it seems fitting that my first episode will tackle the Dyatlov Pass Incident, which is easily the creepiest, most disturbing, unsolved mystery of all time. Do you have any questions you’d like me to answer on the vlog? Any theories you’d like me to weigh in on? Please leave them in the comments.

For those of you who aren’t familiar, here is the story of what happened. It’s long, but it’s a fascinating tale, I promise.

So what happened to the ill-fated campers? There are tons of theories.

Interestingly enough, one theory that’s never mentioned is the human element (beyond the Mansis). If you delve into this case, you’ll see lots of claims that there were no signs of a struggle or defensive wounds on the bodies. But all of the bruising–especially on the hands and face–the fractures, the abrasions–could definitely be the result of a struggle. But what immense force crushed the bodies? Why did some live longer than others? Why did they decompose at different rates, and what on earth was going on with that radiation?

As frustrating as it is to contemplate, the Dyatlov Pass Incident is a mystery that will most likely never be solved. Many of the people involved in the original investigation are dead.

Yuri Yudin, 22, the only surviving member of the group, died in 2013. The day of the camping trip, he’d become ill and had to turn back before his friends trekked into the mountains. He wasn’t with them on that fateful night.

“If I had a chance to ask God just one question, it would be, ‘What really happened to my friends that night?’” he once said. Me too, Yuri.

What do you think happened at Dyatlov Pass? Let’s talk theories!

PS – For more unsolved mysteries and other creepy stories, plus free books, please sign up for my Hidden Library.