The skull in the sky: Scary True Stories with author Ev Bishop 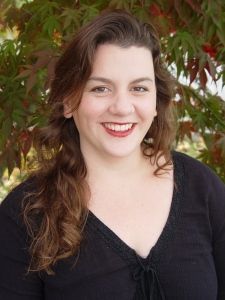 I’ve been friends with Ev for a long, long time–we go back to the iVillage writing forums, if anyone remembers those. It’s funny how you can know someone quite well and still not know critical things about them–it seems Ev lives in a haunted house, for instance.

Here is her story:

Q1) I’ve heard some strange things have happened in your house. Can you tell me about them?

Yes, both my house and the cabin on our property have had several unrelated, unknown-to-each-other people come to the conclusion that they’re haunted or, in two people’s words, “possessed.” I have experienced some very odd things—but nothing overtly malevolent.

For example, one night, about a month ago, actually, my husband I were watching TV (had been for a few hours) alone in our house. Suddenly there was the sound of loudly gushing water. My hubby got up and went to the bathroom, thinking the worst—a leak or something—but no, the sink tap had just been turned to full blast. “That’s weird,” he said—and yes, it really was.

Another time (going back quite a few years now), a friend who had moved away when we were little kids came to visit me when we were teens (I live in the same house I was raised in, a recent move). I was at work and when I came home she was huddled in my room in tears and insisted that the house was haunted and said she would never stay in it alone again. Apparently when she was trying to have a bath someone kept running up and down the hallway and tested the doorknob, once or twice. At first she thought nothing of it, assumed it was one of us, home early, needing the washroom—but each time she called out, she got no answer. Then she thought it was my brother trying to bug her, but she got out to investigate, no one was there. Later, when we all arrived back, it was proven none of us had been there and the doors had been locked when we left.

I too have heard people walking in the house, have found cupboards open I was sure I’d shut, have gone to greet my husband when he’s arrived home—or responded to noises I thought were my family arriving home—only to find no one there. But it’s an older home, so you rationalize sounds away, right?

Q2) Have you personally experienced any phenomena that scared you? What happened?

I was fascinated by magic as a child (an interest that lingers today) and I used to pray for magical powers. (Yes, I was sort of mixing up theologies—but I even had a bible verse that I based my prayers on, honestly believing God would answer my request.)

My aunt/best friend, who isn’t quite two years older than me, shared similar interests and most of our ongoing fantasy games outside involved us being powerful elves or witches. We had full reign (lol) of a 1000-acre realm in a very secluded, sparsely populated part of northern British Columbia. One fall afternoon, we decided to create a sacred circle and try to call something forth.

We found very large river rocks—so large we could hardly heft them—and lugged them one by one to our chosen spot. (I suspect my aunt had chosen it for a specific reason, but don’t recall what it was.) One rock was almost pure white, one black, one that blue-green you often find in riverbeds, and one was a purple-red color. We scuffed a deep circle in the dirt, and then set the rocks in a compass formation, one for north, one for south, etc. We set another stone in the center where we stood. Aloud, we named what we felt each rock symbolized.

We started to chant, sort of being silly at first, then repeating words we’d heard elsewhere, then stating who we were and what we wanted.

It was very quiet, very isolated, and there was no big noise or crazy lights or anything dramatic—but all of sudden, there was a figure of man—shadowy, like a silhouette—across the circle from us. He raised one arm and beckoned.

It was hands down one of the most terrifying moments of my life. I turned and took off running, turning back only once. The figure had disappeared and my aunt was on my heels. We didn’t stop running until we were almost back to my grandma’s farmhouse. The thing I was most alarmed by is that whatever I had expected—or not expected—it hadn’t been some man, so I didn’t know how, if it was my imagination, that was what I dreamed up.

Q3) What were you afraid of as a child?

During the years I was nine to eleven, I frequently saw a grimacing skull in the sky outside my bedroom window (or what appeared to be a skull; it wasn’t as insubstantial as cloud, but also didn’t have completely defined edges or structure or anything). I tried to explain it away, even then, by saying it was the moon or something in a tree, etc. etc. Except there was no tree in the right spot in the yard, there was nothing to reflect anything of that nature into my window—and my room faced the wrong side of the yard for it to be the moon, ever. It never did anything. I didn’t hear noises or see movement, but whenever it was outside, I was super conscious of a horrible feeling of what I would now call evil.

Q4) You’ve written many things, primarily women’s fiction and romance. How do these creepy real-life experience influence your writing, if at all? Have you ever considered coming over to the dark side, so to speak?

They, along with other countless creepy moments, totally influence my writing. I’m fascinated by the things that terrify us, haunt us (metaphorically, for sure—and possibly literally), or motivate us to do the things we do, good or bad.

I love women’s fiction and romance, it’s true, but all of my traditionally published short stories (with the exception of two YA pieces) are speculative fiction with sci fi and/or light horror elements. I don’t think the divide between the genres is as huge as some might think. Good romance and horror stories are fueled by the things we’re passionate about and/or fear the most. The nuts and bolts of the tales look extremely different, but the driving motivations of the characters are often similar—avoid pain, survive, find love—or save/keep/protect love, etc. People can, of course, completely disagree with me. I’d love to hear supporting or divergent thoughts on the topic!

What do you think? Is Ev’s house haunted? Is there a scientific explanation for the skull she saw in the sky? Do you think the romance and horror genres are two sides of the same coin? 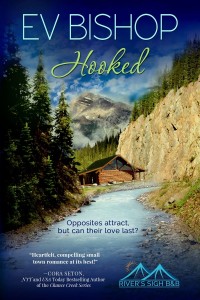 Ev’s latest book, Hooked, is the second in her River’s Sigh B & B series. No worries if you haven’t read the first, Wedding Bands. Each novel totally stands on its own.

Sam Kendall gives her baby up without regrets. Years later, her daughter tracks her down—and what does Sam do? Falls for the kid’s adoptive father. Talk about stupid! She and Charlie are complete opposites—but he’s also everything she never knew she wanted. What on earth should she do?

Ev Bishop is a long-time columnist with the Terrace Standard, and her other articles and essays have been published in a variety of magazines and journals across North America. Storytelling is her true love, however, and she writes fiction in variety of lengths and genres.

She has two novels published through Winding Path Books: Bigger Things and Wedding Bands (Book 1 in the River’s Sigh B & B series), with a third (Hooked, Book 2 in River’s Sigh B & B) due out May 2015. She also writes under the pen name Toni Sheridan (The Present and Drummer Boy, White Rose Publishing).