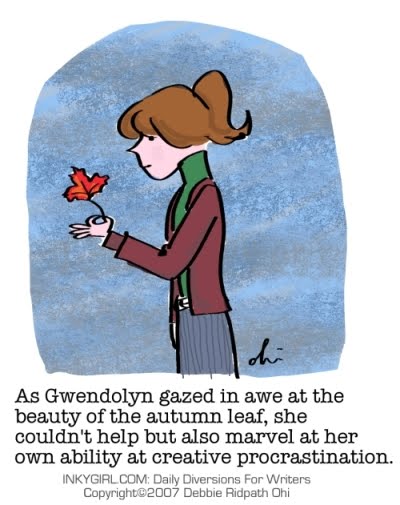 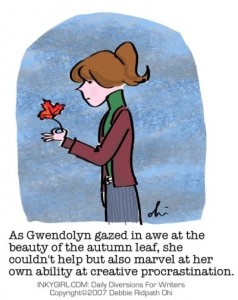 When I was a kid, writing came easy. By the time I hit college, I’d written several full-length novels. As a college student, I finished a 500 page novel during my summer break, in spite of working twelve hour shifts at an answering service. (Did I mention the book was single-spaced?) I believe that book’s still rotting in a landfill somewhere.

Enter the working world, otherwise known as Real Life, and things got a whole lot tougher. When I was running my freelance business full-time, I didn’t write a word of fiction, except for the serial stories the local paper commissioned me to create. I hated myself for not writing. Even though I was producing hundreds of articles each year, some of them fairly creative, I felt like I was wasting my life. Sure, journalism was great, but I was meant to be a novelist.

I was desperate for a solution. I started a writers group. I scheduled dinners with a friend who was a big fan of my writing, back when I actually wrote something. Nothing helped until I read Stephen King’s On Writing and something just clicked. It was time. Eventually, I took out a loan, took some time off from my company, and Finished.The.Damn.Book.

Judging from the writers forums I participate in, the blogs I read, the classes I take, and the conferences I go to, most writers have struggled with a dry spell at one time or another. Some never get out of it, and those who do have difficulty pinpointing what led them to the writing equivalent of nirvana.

It’s fitting that this blog is about writing and muay thai, because I have similar feelings about both. If I’m in The Zone–writing like mad and attending kickboxing class regularly–it’s all I want to do. I can get fairly obsessive. But once I fall out of the habit, it’s extremely difficult to get back into it. I never feel good about myself–or my life–if I’m neglecting either one.

I’ve never found a foolproof way to kick start my writing after a dry spell, and it’s not for lack of trying. Every author’s advice is always the same: just do it. “There is no secret,” they say. “You just have to force yourself to sit down at that computer, for at least an hour everyday, until it comes back to you.”

But you know what? I think I found a secret, after all. At least, it’s something that worked for me.

I didn’t write on Saturday, opting for Thai food and Scott Pilgrim versus The World instead. On Sunday, I dragged myself to the computer, hoping to make up for lost time, and…didn’t feel like writing. Really didn’t feel like it. In desperation, I asked The Boy to say something motivating, but I didn’t expect anything he said to really work. Not that he isn’t amazing and supportive, because he is. I’ve just never had any “trick” work for this kind of slump before. Like everyone says, there’s no secret.

So, after trying a few things that didn’t work, The Boy came up with a challenge. If I wrote ten new pages on the novel, I could look forward to a wonderful, relaxing Sunday evening with my favorite junk food (bad, I know, but still an excellent motivator!), foot rubs, and a movie of my choice. Suddenly, working on my book seemed like a fun contest–a contest I could win. With renewed enthusiasm, I started writing. A couple of hours later, I had eleven pages–a total of 3,209 words. I haven’t written that much in a single session for years. I was on a roll again, and it didn’t end after I enjoyed my reward. This morning, I wrote another six pages (over 1,600 words). I’m on track for finishing the first draft of Dragonfly Summer by the end of this month. Dragonfly Summer will be the first novel I’ve finished in FIVE years, and that will definitely be an occasion worthy of celebrating!

Even though you may not have The Boy at hand, I’m sure you have someone in your corner who loves your work and who knows you well enough to devise the perfect challenge. Next time you’re in the Dead Zone, give it a try. Maybe The Secret will work for you, too.

Have you ever experienced a creative dry spell? What jolted you out of it?

Comic used with permission from Debbie Ridpath Ohi at Inkygirl.com