In our search for a quiet tropical island, we stumbled across one that is more quiet than most.

The Palmyra Atoll has between four and twenty people living on it at any one time, all of whom are U.S. government scientists.

I found this intriguing bit of info on Wikipedia :

The issue of the governing of Palmyra is generally a moot point, since there is no permanent population remaining there, nor any reason to think that there will be in the future.

The reason why is something Wikipedia won’t tell you. Since the time of its discovery, Palmyra has been the site of murders, unexplained disappearances, shark attacks, ship wrecks, and other nastiness.

Even its name comes from an unfortunate ship that was dashed upon the island’s reefs.

Sometimes surviving a shipwreck on the island is a fate worse than death. After an American ship crashed there in 1870, a group of survivors made it to shore, but they weren’t survivors for long. The crew of another ship found their murdered bodies strewn about the island. Since the island was uninhabited, who had killed them? The cause of their deaths was never determined.

When people do manage to make it to the island and stay awhile, they become increasingly paranoid and aggressive. Many have reported feeling a sense of foreboding, or the fear that someone was watching them.

During the second world war, a patrol plane went down over the island. When a rescue team made its way to where the plane was estimated to have gone down, they found nothing. A thorough search of the island turned up no trace of the missing plane or its crew, not even so much as a scrap of metal or a bolt.

In the late seventies, a group came to the island for a short stay and was chased off by a bizarre cult who threatened them with violence. No one could ever find evidence of this cult or anyone else living on the island.

One of the weirdest cases was the murder of Mac Graham and his wife Eleanor in 1974. The couple had planned to sail around the world, and Mac was eager to live on Palmyra for two years. Understandably, his wife thought this was a really stupid idea, and tried to talk him out of it. She was terrified by the atoll’s dark history, and had premonitions that she wouldn’t survive the visit. 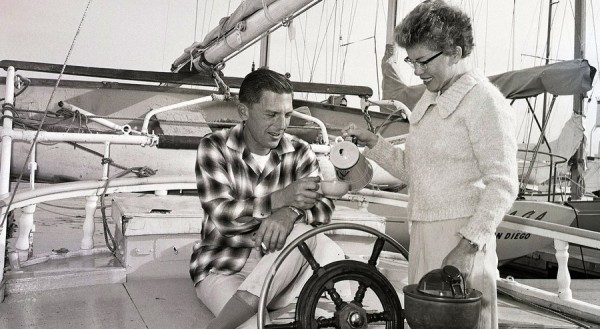 In the tradition of husbands everywhere, Mac didn’t listen to her.

When the Grahams arrived on Palmyra, they were surprised to discover that it wasn’t the lonely island they’d expected. There were already a few people staying there, including felon Buck Walker and his girlfriend Stephanie Stearns.

Whether it was the island’s influence or not is unknown, but Mac and Buck had a hate-on for each other from the start. Their confrontations kept getting uglier and uglier, and Eleanor begged her husband to cut their visit short. She was terrified of Buck. Once again, Mac refused to listen.

The Grahams never got to finish their worldwide sailing trip. They went missing on Palmyra, and no one ever saw them alive again. Buck was eventually found with the Grahams’ boat and was charged with stealing it, but no other trace of the Grahams was found until 1981, when a South African sailor found Eleanor’s mutilated body in a chest that had recently washed ashore. Buck and his girlfriend were charged with Eleanor’s murder, but only Buck was convicted.

The body of Mac Graham has never been found. He is still listed as a missing person.

Are you brave enough to stay a few nights in Palmyra? Based on my experiences in Romania’s haunted forest, I think I’ll give it a miss.

(Coincidentally, the cursed atoll has the same name as the capital of Syria, which is experiencing a very sad fate of its own right now.)

Please see Cursed Paradise of Palmyra Atoll for more creepy stories about this little-known area of the world.