Send in the killer clowns

I wonder whose brilliant idea it was to have clowns entertain children. Is there a child alive who actually likes them?

Clowns have always made me uncomfortable (as have mascots, but that’s a different story). When I was little, I’d cry if one got too close to me.

When I heard about John Wayne Gacy, I wasn’t the slightest bit surprised. Of course a serial killer who preyed on young people would dress as a clown.

I’ve often wondered if Stephen King was thinking of Gacy when he wrote IT, featuring the terrifying clown Pennywise. I suspect Gacy has inspired many horror stories – the man was a serial-killing clown politician. Can’t get much scarier than that.

Gacy started molesting young men in Illinois when he was twenty-five. In 1967, he spent some time in prison for his first offence, but this barely slowed him down. A year later, he was again charged with sexually assaulting a teenage boy.

Like other killers before him, he soon figured out that the best way to satisfy his depraved urges and stay out of jail was to get rid of the witnesses. His contracting company gave him access to a seemingly endless supply of young men, and he continued to put on a happy face while he abused and murdered them. He was a successful politician, a prominent member of the Jaycees, and even posed for a picture with First Lady Rosalynn Carter in 1978. 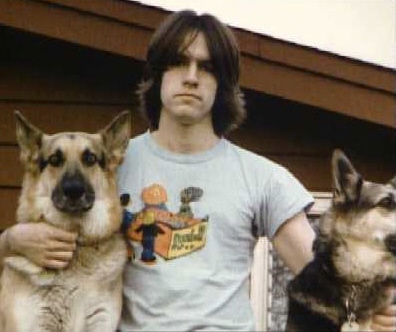 A brilliant sociopath, Gacy didn’t arouse many suspicions until he got a little too comfortable. Still in ’78, Gacy was chatting with the owner of a pharmacy in Des Plaines when he mentioned he hired teenage boys. Fifteen-year-old Robert Piest overheard, and rushed out to tell his mother–who was waiting to drive him home–that someone wanted to talk to him about a contracting job.

“I’ll be right back,” he promised. It was her forty-sixth birthday, and she’d delayed her party until her son was finished work.

She never saw him again.

This time Gacy had gone too far. Robert’s co-workers were able to tell police who had last been seen with the missing boy. It didn’t take much digging for the investigators to discover two of Gacy’s young employees had also disappeared, or that he’d been convicted of assaulting and sodomizing other teenagers. As the net tightened around the serial killer, he continued to joke and laugh with the police officers, once telling them, “You know…a clown can get away with murder.”

Not this clown. Not anymore.

As the police investigation resulted in more and more evidence, Gacy’s home was searched. An officer who used the killer’s bathroom detected the distinctive aroma of rotting flesh coming from the heating ducts. Gacy eventually confessed, showing police where the bodies were hidden. He is believed to have murdered at least thirty-three young men, twenty-six of whom were buried in his crawl space.

Gacy learned to paint during his fourteen years on death row, creating masterpieces that resemble Stephen King’s worst nightmares. Some people purchased his paintings just to burn them.

The portly killer was finally executed by lethal injection on May 10, 1994.

If clowns are your scare of choice, you’ll love L.L. Soares and G. Daniel Gunn’s Nightmares in Greasepaint, which is part of the Childhood Fears collection. I’ve seen a few reviewers guess at how Soares and Gunn worked together to co-write such a creepy novella–since the book is told from two points of view, the common assumption was that each author took charge of one. The truth is far more interesting.

L.L. SOARES: Dan Keohane (aka G. Daniel Gunn) and I have had pretty good luck working together.  Our first collaboration, the short story “Mermaids,” was in Cemetery Dance (the first time either one of us were in that magazine).

When I first met Dan at a convention in 2000, we hit it off right 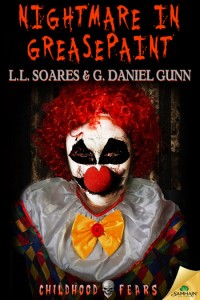 away, and when we talked about what we were working on, he mentioned a story he called Billy and the Clown that he was having fun with but hadn’t finished. In subsequent years, I’d ask him how Billy was doing, and if I could read it, but the story always seemed to get pushed onto the back burner. Never finished. So around 2008 I said to him, “Hey, if you can’t finish the story, send it to me and I’ll finish it.” So he did. Originally, it was a short story that took place in the course of one scary evening, as a father, wife and son were terrorized by a supernatural clown. But, working together, we expanded on it, gave all the characters a backstory, defined more clearly who the clown was and what his powers were, introduced the mythology of a mysterious amulet, gave it a new title, and had it all culminate in that spooky night when the clown comes back to his family home.

G. DANIEL GUNN: I wrote the original story in late `80’s and it was my very first horror piece, what got me hooked on writing horror in the first place. I had worked on it and worked on it, and then it was stuffed in a file drawer for ten years until I met Lauran (L.L. Soares) at Necon. At that point it was a fond memory of my earlier writing days. But the guy kept bugging me. Somehow he knew just from the description that it was something he could have fun with. So he gets a printed (no disk copy) copy, scans it in and a while later I get it back with five thousand new words and a complete back story for the clown and father. Well, after back and forth between us for another two years and 14,000 more words (!) , we had Nightmare in Greasepaint. I’m really happy with how it came out.

If you’re interested in getting your own copy of Childhood Fears, which includes the story Nightmare in Greasepaint, it’s available at all online retailers, including  iTunes, Barnes & Noble, Kobo, and Amazon.