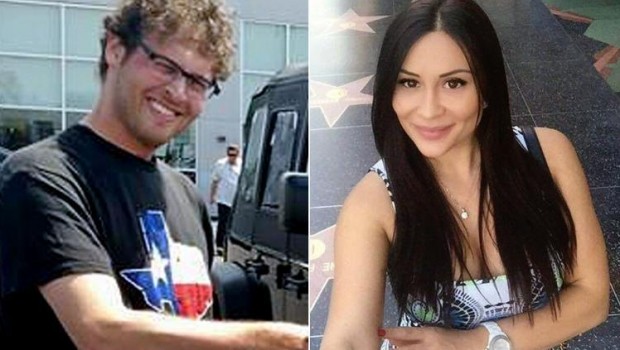 This week I’m welcoming back author Hunter Shea, who has another tale of true-life horror to share. Take it away, Hunter!

They say that art imitates life. In 2016, the unique world of graphic comics learned that sometimes, art inspires life.

The police were called to a West Hollywood apartment, searching for a missing Ukranian woman named Iana Kasian. A man answered their knock, but refused to let them in. Attempts to push the door open were thwarted, as furniture had been stacked against it. When the man inside finally relented and let them in, the cops came upon a scene so grisly, it was destined to haunt the men in blue for the rest of their lives.

The agitated resident stood beside his bed. On that bed was the naked, battered, bruised and scalped corpse of Iana Kasian. The coroner would list her cause of death as exsanguination. Almost every drop of blood had been drained from her body. It was the stuff of horror movies.

Nearby, unharmed, was the couple’s two-month-old baby. The man, whom the police soon learned was trust-fund baby Blake Leibel, seemed not to care that his girlfriend lay murdered in front of him. He took no blame, only telling them in a faraway, disinterested tone that he guessed it was now their job to find her killer.

Who was Blake Leibel? He was the son of a Canadian former Olympian turned real-estate mogul. Blake and his brother had come to Los Angeles many years earlier to start their own careers. Blake yearned to be part of the Hollywood scene. And to a degree, he accomplished that goal. He’d worked as a director and animator. He was even a consultant on the Space Balls cartoon, working with the legendary Mel Brooks.

What he wanted most was to break into the world of comic books. Specifically, graphic novels. He hired a team to create his dream work, a graphic novel called “Syndrome”. This was where art begins to portend the future life of Blake. You see, “Syndrome” is about a convicted serial killer. In one scene, the killer flashes back to a treasured memory – a corpse hanging naked from its feet, throat slit, every drop of blood drained from the body. Even eerier, the cover of “Syndrome” is a close up of a baby, its scalp peeled back to reveal its brains.

Why did Blake commit such a brutal crime? Did he, in fact, murder his young, beautiful girlfriend in cold blood?

To this day, no one knows. People who knew Blake admit he had a dark side. He loved gory movies and could have a black sense of humor. In 2015, his personality seemed to change overnight. He divorced his wife and started dating Kasian. He pushed friends and family away, diving headfirst into his desire to be recognized as a comic-book creator. He may have been a little strange, perhaps going through some emotional crisis. But to kill in such brutal fashion? To cut away Kasian’s scalp with cruel precision, peel it completely off and remove part of her face. To beat and torture her. To drain her blood while she was still alive, potentially suffering up to eight hours before her heart simply gave out. It seems almost inconceivable. To this day, some who know him well swear he couldn’t have done it.

There was a theory that he was framed by the Russian mafia, who wanted to get back at his family for Blake’s brother’s gambling debts. It seems like a long shot. Blake was there, in the room, within the barricaded apartment, with an almost sociopathic reaction to the horror before him.

Was “Syndrome” his staging ground for his darkest, most twisted desires? Did he hope to exorcise the demons lurking in his soul? Did the failure of the comic book lead him to act out, in splashes of crimson, the deeds in black ink that had done little to quell his needs?

Blake isn’t telling. At least, not yet.

He may get the death penalty for his crime. 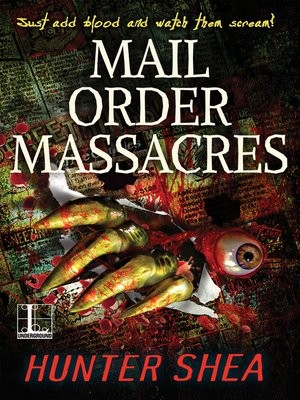 Beware of what you order in the back pages of comic books!

Sea monkeys. 3-D specs. Hypno-coins. Ant farms. Kryptonite rocks. Miniature submarines made from cardboard. All available for a buck or less from the back page of comic books. And we blew our weekly allowance on these rip-offs, only to be disappointed when they turned out to be total crap.

But what if these bogus products had side effects not advertised? In horror master Hunter Shea’s MAIL ORDER MASSACRE, sometimes you do get more than you paid for . . .

JUST ADD WATER
It’s been years since David and Patrick flushed away the dead Sea Serpents they got in the mail. After thriving in the toxic stew of pollution, strange, slimy creatures now rise from the sewers. Once the screaming starts, David and Patrick realize that their childhood pets really did come to life. With a vengeance. They’re massive monsters. . . and ravenous for human flesh!

OPTICAL DELUSION
Martin punishes his son for wasting his allowance on a pair of cardboard X-ray specs. But when Martin tries them on, he’s stunned to see through walls and clothes. But the novelty becomes a waking nightmare when the glasses burn into his face and he starts seeing horrifying apocalyptic visions no mortal man was ever meant to see. Images that turn him from a husband and father to a bloodthirsty homicidal maniac . . .

MONEY BACK GUARANTEE
With her son’s heart set on piloting his own nuclear submarine, Rosemary orders the craft advertised on the back of a comic book. But when her son nearly drowns in the swimming pool, an enraged Rosemary complains to the Better Business Bureau. The company’s customer service center retaliates with threatening phone calls. Then her son and husband disappear. Now it’s all-out war and Rosemary wants her $1.99 back!