Q is for Quiang Shi 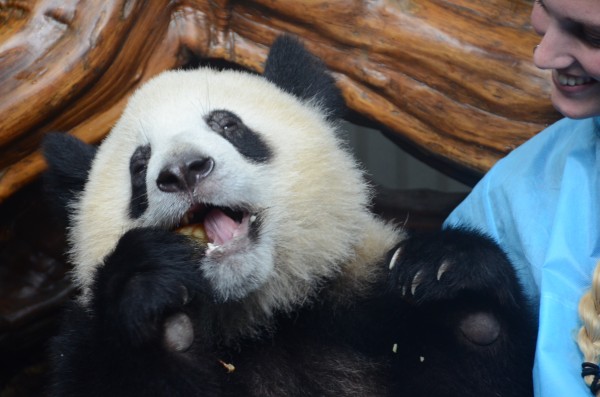 Since I couldn’t find a photo of the qiang shi, enjoy this photo I took of a panda cub eating an apple.

China is a land of many interesting myths and legends, including that of the quiang shi, a demon that inhabits a corpse and prevents it from decaying by feeding on the blood of other corpses…and on the living.

While some refer to the quiang shi as a “vampire,” it doesn’t resemble any vampire ever described. The quiang shi is covered with white or greenish hair, and has glaring eyes and sharp claws.

The early Chinese were very fearful of these creatures, and believed that an evil human soul only needed a skeleton–or in some cases, just a skull–to become one. Cats were never allowed in the same room with corpses, for if a cat jumped over a body, it would impart its “tiger nature” to the corpse, turning it into the quiang shi. (Why are cats always blamed for everything?) If the sun or moon were allowed to shine on a corpse, the soul might be strengthened enough by the light to feed on the blood of others.

Have you ever heard of these fearsome creatures? Some movie makers have taken extreme license with the legend, calling them jiang shi and depicting them as vampires in traditional Chinese costumes.

For more wonderfully weird stories of China, check out this post about my adventures there last year.