N is for Nessie

I have a special affinity for Nessie, the most famous “monster” in the world. She inspired my earliest horror stories. There’s just something about Scotland, with its mists, moors, and gloomy lakes, that makes one want to write a scary story.

One of my top bucket-list items is to sit on the banks of Loch Ness for days, watching for Nessie.

There have been many sightings of this fabled lake creature, but controversy seems to surround each one.

The earliest report of Nessie comes from the seventh century. Saint Columba, an Irish monk, discovered some locals burying a man who had suffered a fatal “water beast” attack.

Courageous man that he was, Saint Columba ordered his follower Luigne to swim across the River Ness. The beast promptly appeared and chased after the hapless Luigne, but Saint Columba was prepared. He made the sign of the cross and commanded the beast not to touch his follower, upon which the lake monster fled in fear.

Hmm…I have no idea why that particular sighting is viewed with suspicion. 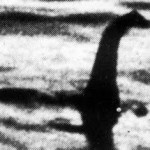 The biggest blow to Nessie lovers came in 1994, when the most famous photograph of the creature was exposed as an elaborate hoax. However, even the hoax claims have been refuted. Some people stubbornly insist that the photos are real (in spite of a string that could be seen pulling the beast when the photo was analyzed with modern technology).

In 2011, a local skipper captured a sonar image of a long unidentified object which followed his boat for two minutes. A scientist from the National Oceanography Centre said that the object was a bloom of algae and zooplankton. However, Roland Watson, a cryptozoologist and Loch Ness Monster researcher, has criticised this analysis. Algae needs sunlight to grow, and the waters of Loch Ness are very dark, and nearly devoid of sunlight.

So does Nessie exist? Or is her legend based upon sightings of otters, beavers, and charlatans, as many claim?

It’s difficult for the Nessie myth to survive close scrutiny. Since she was first seen in the seventh century and continues to be spotted today, she’s obviously not the same creature–unless she’s immortal. Assuming one believes in Nessie, that means there had to be at least a breeding pair of monsters at one point.

One creature could perhaps elude hundreds of eager witnesses for generations, but it’s harder to believe that a family of giant monsters could pull off the same feat.

Even today, Nessie continues to make appearances. She was last seen in an Apple maps photo last year. But if she exists, how come all of the in-depth investigations have failed to find conclusive proof?

Do you believe in Nessie? I still do, much like I once strongly believed in Santa Claus. The world feels like a better place when I envision that plesiosaur freely swimming around her Loch.

P.S. Meet the priest who claimed to exorcise Nessie.