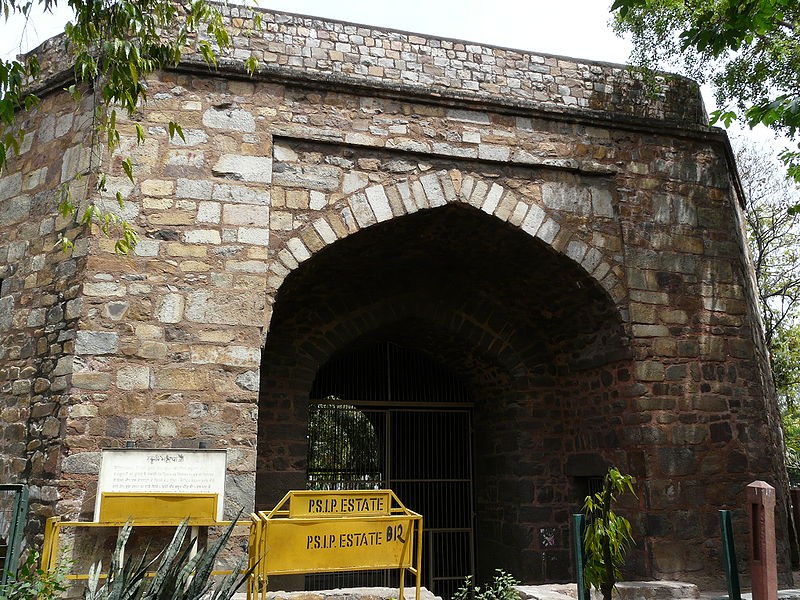 Please welcome my multi-talented author friend, Damyanti Biswas, as she shares this chilling true story of one of India’s mysterious places.

Delhi is a sprawling modern metropolis, and its urban jungle of steel and glass looks unlikely to be haunted, but as I discovered while conducting research for my debut literary crime novel, the city has pockets of the past, and its share of the unexplained.

I’ll speak of one such place in Delhi, its bloody history and crime-filled recent past, and the ghostly urban legends that surround it.

Since the crime spree in You Beneath Your Skin involved rape, I was keen to ferret out a place where such a crime had occurred and Khooni Darwaza seemed like a suitably chilling place.

Khooni Darwaza means Bloodied Door, or Murderous Door, or A Door Where Murder has Occurred, depending on who you ask. It is not just a door but a fortress-like structure about a 50 feet high, with three staircases leading to different levels.

It is situated on the Bahadur Shah Zafar Marg–a very busy cosmopolitan street. One cold Delhi afternoon I drove past and stopped at a nearby tea stall to soak in the atmosphere. The building looked like any other historical remnant in Delhi, old, dilapidated. But this site was locked from all sides.

A medical student had been gang-raped there in 2002. She had been dragged in there by three men at 2.30 pm,  within a few feet of a busy road, and a major police station less than a quarter mile away.

Like any self-respecting writer, I decided to waste a few hours researching this setting, which was completely irrelevant to my plot. I discovered that the building was erected in the 16th century, and was often used to display the heads of criminals beheaded under the rule of law. 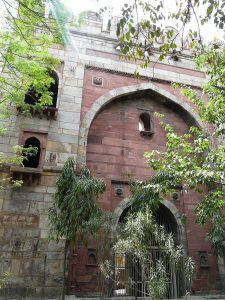 I got talking to the tea-stall owner, who told me that the place rose in infamy when Mughal Emperor Jahangir (whose son built the famed Taj Mahal) got dissenters executed at the Khooni Darwaza and let their heads rot on poles. This apparently set somewhat of a tradition, because his grandson, Mughal Emperror Aurangazeb, got his own brother executed and displayed on the same ramparts.

During the rebellion of 1857, when Indians turned against their colonial masters, the British continued this macabre heritage and shot down three of the last Mughal princes at Khooni Darwaza, displaying their remains as a warning.

More slaughter followed at this venue in 1947, during the widespread riots that took over when India was declared an independent nation.

According to locals, the place has a reputation. But of course. The walls are said to show red stains every once in a while. Blood from the deceased–the countless who lost their lives here, and are apparently unwilling to leave. Despite the place being sealed against the public, there are stories of the ghostly princes who were murdered here doing the rounds—locals say there are whispers and screams. At night, the place has an eerie air about it—I saw this for myself as I left—a looming, menacing shadow despite being so close to habitation.

The spooky evening spent near Khooni Darwaza stayed with me and trickled into some descriptions of New Delhi:

“Drawing her scarf closer about her neck, Anjali stepped out of Kusum’s jeep at the Safdarjung mortuary. The sooty air made her cough, the chill about her face like the touch of a spiteful ghost—light, yet unmistakeable in its malign intent. It was far colder where she was headed.” 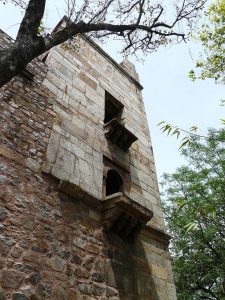 You Beneath Your Skin has no paranormal elements, but the mood of the book is smoggy, mysterious and dark, and it has benefited from my irrelevant research for authenticity and local color.

Author proceeds from the book are going to Project Why and Stop Acid Attacks.

What haunted places exist in the cities, towns or villages you live in? Would you like to share some of the stories?

In You Beneath Your Skin, Damyanti uses the framework of a crime thriller, and conjures in this book an authentic portrayal of poverty, misogyny, and political corruption. A woman from Delhi’s upper classes suffers an acid attack. This case is investigated amid the backdrop of a crime spree. Unclad bodies of slum women are found stuffed in trash bags, their faces disfigured with acid.

It is a whodunit, but also a whydunit—not just who has committed the crime, but why? It raises questions: how much do you know about those closest to you? To what extent would you go to protect the ones you love? And most importantly, what would you do if something you deeply cherished was taken away from you?

You can get your own copy of You Beneath Your Skin outside of India HERE.

In India, it is available from Simon & Schuster HERE. 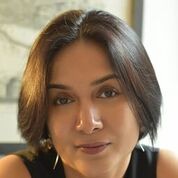 Damyanti Biswas lives in Singapore, and works with India’s underprivileged children as part of Project WHY, a charity that promotes educational and social enhancement in underprivileged communities. Her short stories have been published in magazines in US, UK, and Asia, and she helps edit the Forge Literary Magazine.

You can connect with Damyanti on her blog and Twitter.

P.S. If you’re in Winnipeg and love a great ghost story, please join me for Haunting the Library this Saturday, October 26th. More details here. – J.H.