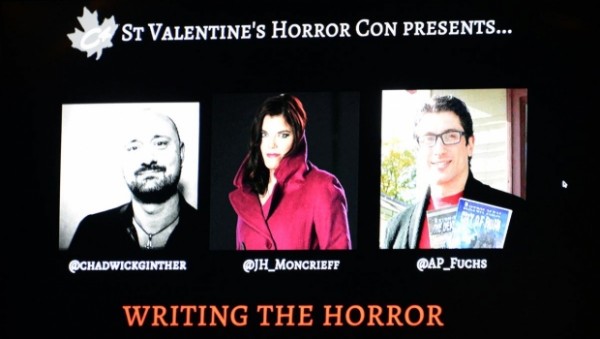 In January 2016, I discovered my friend had a dark side.

While he appeared to be an innocuous broadcasting instructor at the local college, it turned out he was leading a double life.

“In fact, I’m going to be at this horror con coming up on Valentine’s Day,” he said. “You should share a table with me. You can sell your books!”

To be honest, my first response can be best summed up as, “No thanks.” Heavy on the NO.

It’s not easy to get multiple copies of my book. I have to order them from my publisher, who is in another country, and pay shipping and brokerage and exchange rates and other nasty things. And that’s if nothing goes wrong and the books get here in time.

Since I’d never done a con before, I would need additional supplies as well–posters and other signage, for one.

But the main reason I wasn’t interested was that I’d heard a lot about cons being a man’s world. Anyone with a Twitter account would find it difficult not to notice all the stories of sexual abuse, rape, and other forms of violence towards women. It’s so prevalent that there’s even a saying: “Cosplay is not consent.”

Not that I had any intention of dressing up as a sexy zombie or sexy anything else. That was yet another reason I wanted to say no. My days of channeling Lara Croft are over.

But my friend was very persuasive. Since he generously offered me a corner of his table, the con would cost me nothing but time — and the expense of books and signage, which could be used for other events. In the end, I agreed. If nothing else, it would be an experience.

Before I knew it, I was a featured author on the con website and asked to speak about horror writing on a panel. Nervous that I’d be babbling to an empty room, I begged a few friends to come out and show their support.

I had no idea what I was in for.

Much like I’ve learned from my colleagues at Samhain Horror, people who dig the dark side are some of the nicest, most generous, friendliest folks you will ever meet.

My first morning began with a sale to an online friend – -someone I’d chatted with over Facebook who had confessed he didn’t like horror. He bought a ticket to the con anyway, just to buy a book from me and get it signed. How amazing is that? That first sale set the tone for the day, and made me feel like less of an impostor.

Heading into the con, my goal was to sell just one book to a stranger. “If I sell a single book to someone who isn’t a personal connection, I’ll be surprised,” I said. But most of my sales were to strangers, as the majority of my friends already have the book. It was great to meet so many people who were willing to take a chance on my work, especially since I discovered later that my book was double the price of the other local authors’ (damn that exchange rate!)

When it was time for my panel at 1 p.m., I only had two books left. Sharing my horror-writing experience with authors Chadwick Ginther and A.P. Fuchs was a lot of fun. It was fantastic to meet other horror authors who are working in my city – I really hope we keep in touch. And a small but enthusiastic group of friends showed up to cheer me on, which was wonderful. I’ll never take the support I’ve received for granted.

After the panel, I returned to find I had one book left. The last one sold soon after, so I handed out business cards, bookmarks and candy for the rest of the afternoon. My boyfriend rushed to the local bookstore and cleaned them out so I had some to sell the following day. Even though Sunday was a lot quieter, I still was able to sell my remaining books quickly. All I have left is my much-loved, slightly battered author copy.

This is what it’s all about–meeting fans and supporters and readers of all kinds. What an incredible experience to connect face-to-face with the people who will read my work! 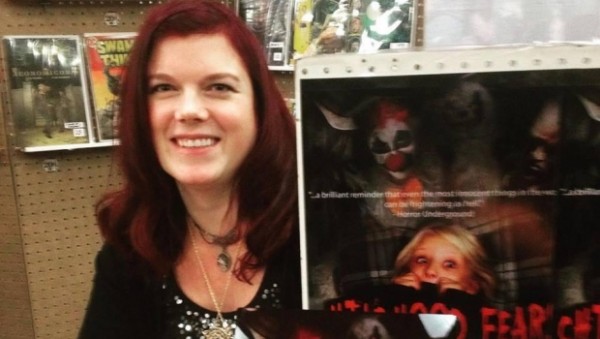 I am now a diehard fan of horror cons, and will return with a bigger and better display next year. I can’t thank my friend Dean Cooper enough for generously sharing his table and convincing me to give it a shot.

A few things I learned:

Have you ever been to a convention, as a writer or a fan? What was your experience like? Any tips to share? And if not, is it something you’d consider? Why or why not?

Thanks to everyone who supported me at the St. Valentine’s Horror Con! You made it a most memorable experience. 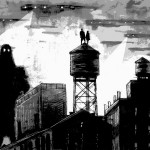 If you’re a writer, you know how difficult it can be to find paying markets for your work. My friend Richard Thomas is hoping to change all that by launching Gamut, an online magazine for neo-noir, speculative, literary fiction. Gamut will pay industry rates and already has a wide range of talented peeps involved. To learn more, check out the Kickstarter campaign here.