Manson is dead. Why should we care?

Manson is often referred to as a serial killer, but this is technically incorrect, since it was never proven he physically participated in the murders committed by his followers. Even so, he was committed to life in prison after being convicted of nine first-degree murder charges.

If anything, he’s best described as a cult leader who brainwashed, drugged, and orchestrated his young followers to carry out some of the most brutal murders in U.S. history.

The 1969 murders of actress Sharon Tate, Abigail Ann Folger, Wojciech Frykowski, Steven Earl Parent, and Jay Sebring were rumoured to be a tragic case of mistaken identity, since the Tate home had once belonged to a record producer Manson had a grudge against. But if that were true, the equally horrific murders of Leno and Rosemary LaBianca the next day made no sense at all, as the ill-fated couple had no connection to the cult leader.

Manson’s motive, if you can call it that, was what he called “Helter Skelter” after the Beatles song. He thought the murders would start a race war, in which Caucasians would believe blacks were responsible, and the resulting violence would lead to Caucasians being wiped out…until Manson’s “family” of cult members emerged to rule the blacks.

How on earth anyone fell for that nonsense will always be a mystery, but somehow–by his choice of young, aimless, vulnerable people as followers, and his use of drugs, sex, and his own charisma to control them–his followers swallowed this twisted fantasy whole. Manson’s terrifying influence led to several young people destroying not only their own lives, but the lives of many innocent people.

The murders continue to be talked about to this day, not only for their extraordinary cruelty and violence–Tate, who was eight and a half months pregnant with Roman Polanski’s child, was stabbed sixteen times–but for the fact that they brought an end to the innocence of the ’60s Flower Power era. Nothing was the same after Manson unleashed his craziness upon the earth.

But now, Manson is dead, and most of the surviving followers who participated in the murders are destined to die in prison as well. Susan Atkins died in prison of brain cancer in 2009, after her application for compassionate release was denied. Leslie Van Houten was recently granted parole, but this decision still has to be approved. 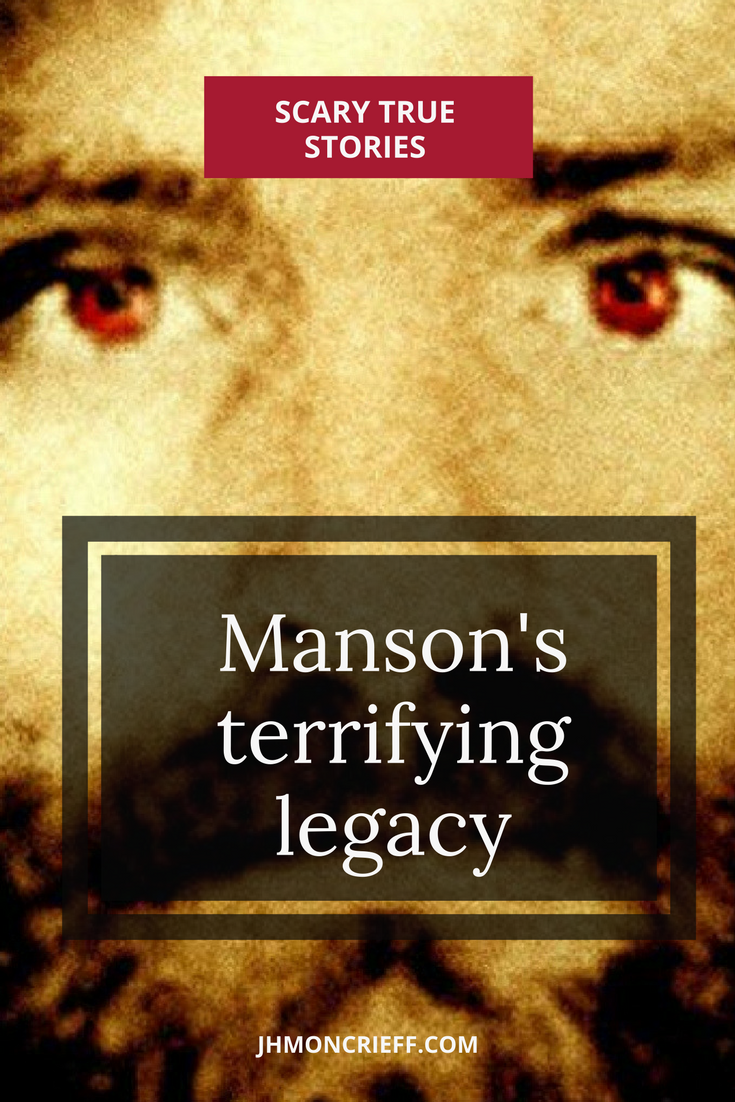 Why should we care about Manson’s demise?

For one, the families of his victims will hopefully have some closure now, some measure of peace they could never achieve with Manson regularly popping up on TV, in books, and in articles and blogs. Manson was a talker, and it was hard for him to resist an opportunity to spread his insanity. Tate’s mom Doris was tormented by the prospect of her daughter’s killers ever seeing the light of day, and consistently campaigned against their parole until her own death in 1992.

One of the scariest things about Manson was that he still influenced people, even from behind bars. I remember reading an interview with him when I was a child that gave me nightmares. It could have been false bravado, but Manson threatened that his followers on the outside, both old and new, would eventually rise up and carry out his vision. The fact that Manson Family member Squeaky Fromme attempted to assassinate President Ford in 1975, a few years after Manson’s conviction, lent that claim some power. Who knows how many horrible people he influenced?

While I’m not about to dance on anyone’s grave, the fact that this evil megalomaniac is gone can’t be viewed as anything other than positive. But Manson’s story is also a profound cautionary tale. Born to a sixteen-year-old who Manson claimed was both a prostitute and an alcoholic, “Charlie” was used and abused and even sold in exchange for a pitcher of beer. He was first arrested at the age of thirteen. There were numerous opportunities for someone to intervene and put him on the right path, but no one did.

Most of his followers were extremely young when they committed the horrific murders–many in their teens and early twenties. Some, including Atkins and Van Houten, have expressed remorse, something Manson himself never did. What if someone had intervened in their lives before they met Manson, or before they fell so deeply under his spell they couldn’t find their way back?

People like Manson prey on the vulnerable. While most cult leaders only endanger their own followers, in this case, Manson turned his outrage into a ridiculous fantasy of power and control, which ended up destroying countless lives.

The scariest part of the story may be how many like him are still out there, waiting.