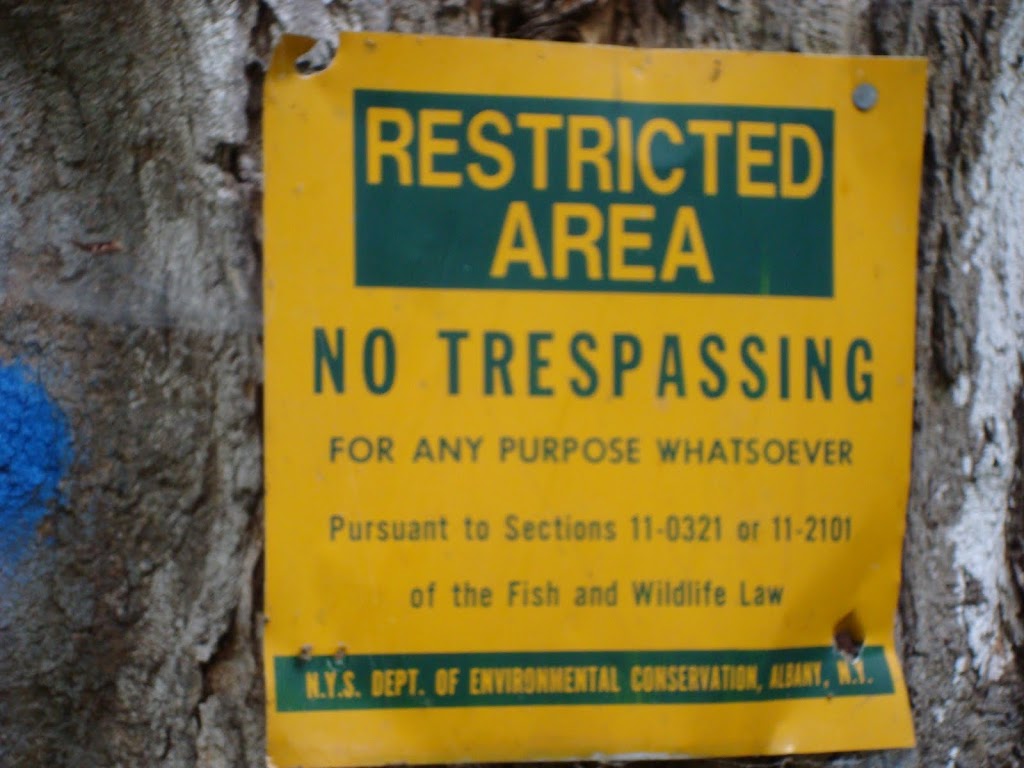 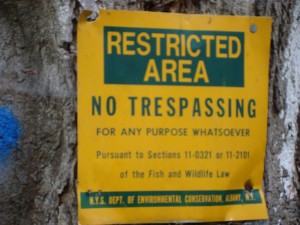 I probably shouldn’t post here in my current lower-than-a-snake’s-belly state, but I need someone to talk to. I feel like such a loser…a loser to end all losers. On the first full day of the retreat, I went to take some photos for the blog and discovered I’d brought my camera, an extra battery, the battery charger…and no memory card. Oh, I have other memory cards, but not the one for my actual camera. I figured it was, oh, I don’t know, INSIDE THE #$&*!@ camera, but it wasn’t. And my camera is a Sony, so it will only take Sony cards, which this place is too remote to have. So that was strike one, and The Boy is a camera guy, so guaranteed I will never live that one down.

Before lunch, Josh and I decided to walk to the lake, which is literally less than five minutes away. Apparently there’s a very particular path you have to take, though–otherwise, you’re walking through someone’s yard and they get kind of irritated after a while with all these writers cutting through. The sign that you’re on the right path is NACL carved onto a little piece of wood off to the side. Josh and I were given directions. We went down what we thought was the correct path. No sign. We went to the path on the far right, which ended up being a driveway. By then it was time for lunch, so we gave up. When I had my meeting with Susie, we went to the lake, so she showed me the correct path. Where was it? Right in the MIDDLE of the two paths Josh and I had chosen! And there was the sign, plain as day. I should have taken that as a sign.

But no. After a very exciting meeting with Susie, which I will tell you about when I’m in a better mood, I decided to walk to town. The walk back is all uphill and supposed to be quite challenging. The round trip is one and a half miles. No problem. I left at around 3:30. I finally made it back here at 6:40, and it’s not because I’m a slow walker. I got lost. For hours.

I am so embarrassed. It was such an easy trip–I can’t believe I got lost. I made it to the town just fine, but on the way back, I neglected to take this little dip to the left. I went straight and ended up on a road parallel to the one I was supposed to be on. Since I was on a different side of the road than the one I’d taken to the town, I didn’t find it that odd that nothing looked familiar. Finally, I got to a school and I knew I would have noticed that. Problem was, I didn’t know where I’d gone wrong. I turned around and started walking back the way I came. I saw a sign pointing the way to Highland Lake Road, which is where the retreat centre is, but when I looked down that way, it was just some guy’s junk pile. I kept walking on the parallel road. Now nothing on this road looked familiar, either. I went back to the sign and walked through the guy’s yard, hoping that Highland Lake Road was somewhere beyond his junk. Nope. Went back out and kept walking the way I had been. I found a man who told me to go back to where I’d seen that sign and go down a different road–Devlin Road–to the end, and then turn right. He told me I had about two miles to go. By this time, it was six pm and we have dinner at six-thirty. I wanted to get back in time for dinner so no one would have to know what a moron I am.

I rushed down Devlin Road, remembering Vern’s words about how fast the vehicles go and how he wouldn’t want to walk this route at night. It was getting dark. My hips were killing me…I’d worn sandals, not expecting to be on a four hour walk. Oh, and I was starting to have to pee in the worst way, as you can imagine. At the end of a very long road, I turned right. I thought I remembered that the retreat was at 10 Highland Lake Road, so I was thrilled when I saw a sign for Highland Lake Road and actual numbers at every driveway. This brought new life into my step, which was good, because once again it was a steep uphill climb. Number 3 was followed by 5, then 7…we were looking good! And then…17. WTF??? I walked as far as 19 before conceding that this was not the way to the retreat centre. On the way back, I ran into some kids and asked them for directions. Once they realized what I was talking about, they told me it was in the other direction from what the man had told me. They also offered several times to give me a ride. With their assurance that it was “just over that hill”, I thanked them kindly but said that I’d (groan) walk. I started off in the direction they’d indicated. The numbers on the driveway signs were really high…138, 131, which puzzled me. Then I realized that they were at least decreasing, so I must finally be going in the right direction. When I’d walked for quite a while with no sign of the retreat centre, I was starting to get a bit teary. Maybe it was that little road I’d seen a while back? I backtracked to it and went about halfway down, but saw nothing familiar. Nope. Back to Highland Lake Road. I walked for another ten or fifteen minutes and was almost losing hope when I saw it! It was 110 Highland Lake, not 10.

Brett had been out looking for me. Susie was a little worried. I felt like such a dork. When I was a kid, I got lost walking from my grandma’s farm to my aunt’s. I saw a yellow and brown house that looked just like my aunt’s and started walking across fields of rye to get to it. Once I realized it was the wrong house, I was lost. What should have been a fifteen minute walk took over two hours, but I eventually made it. My family thought it was the funniest thing they’d ever heard, especially my cousins. They made fun of me for years. Just when I thought I’d lived that down, I have to look like a complete idiot in front of a whole new group of people. They were nice about it, but I could tell they thought I must be pretty stupid. I feel stupid. I feel so humiliated.

There’s supposed to be a bonfire tonight, but I don’t even want to show my face. I will most likely suck it up and go down, but this has turned into a day when I should have stayed in bed…or Winnipeg.