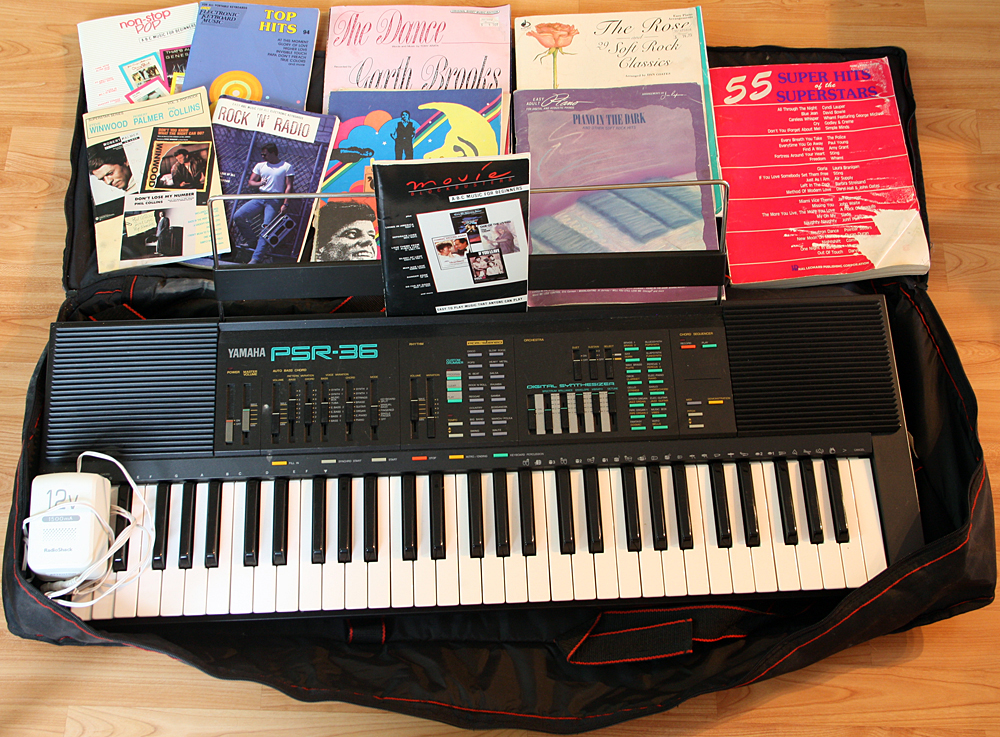 For the past year I’ve been selling my belongings in preparation for my move to an island. In doing so, I’ve realized two things.

2) Most of what I have I don’t need and will never use.

I started off easy, selling gifts and other stuff that I’ve either never really liked or never had a use for. But now that I’ve sold over 170 items (even more when you consider that I sell a lot of things in like-minded lots), it’s inevitable that I would get to the things that have sentimental meaning or value.

I’ve sold a couple of things from The Boy that were cute but ended up being completely impractical. Still, it was hard to let them go because I remembered the joy of opening those gifts and I knew how much thought he had put into getting them for me.

But today was the toughest challenge yet.

I sold my Yamaha PSR-36 keyboard, my faithful musical companion since the ’80s. I’d named it Richie  after Bon Jovi’s lead guitarist, who I had a mad crush on at the time. (I still think his voice is sadly underrated and overlooked–the man has talent.)

What made it so difficult to give up was that I associate that keyboard with my great auntie Fran. How can I ever describe Fran in a way that would do her justice? Fran was light–pure light–everything that is joyful and happy and fun. She was my funniest and most beloved relative. Everyone adored her, and the woman didn’t have a mean bone in her body. She was also a tremendous piano player. Her son went on to play professionally for a living.

When Fran heard I was interested in the piano, she went down to a music store in the big city and kept asking questions until she found the absolute perfect keyboard for me. Then she negotiated the best deal she could. When I came to the city to visit my grandmother for the summer, Fran took me to buy the keyboard. And my grandmother, Fran’s sister, bought me a carrying case for it that Christmas. It was the only gift my Grannie got me that wasn’t knitted slippers or money. I cherished it.

My great auntie Fran passed away quite a few years ago, and my Grannie followed soon after. That keyboard is one of the few objects I have that remind me of Fran.

I was thrilled to finally sell the keyboard at my asking price. A mother bought it for her daughter as a reward for getting 97 percent in first year band. They came to my house today to pick it up. Her daughter looked to be the same age I was when Fran picked it out for me.

It was a bittersweet moment as I watched the girl carry my keyboard away. I’d wanted to show her all it could do. I wanted to contact them later and ask how she liked it. But I forced myself not to…it was time to let Richie go.

It makes me wonder, though. What will I do with my Grannie’s heirloom Royal Albert china? Or her emerald earrings, which are set in gold while I always wear silver?

Have you ever struggled with downsizing? Do you have an object with great sentimental value? I’d love to hear your stories. Cheer me up…misery loves company. 🙂