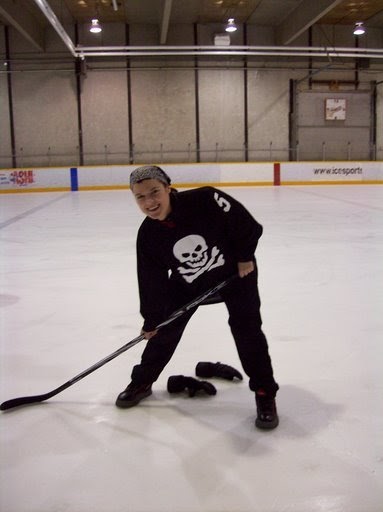 After last Friday’s response was so disappointing (thanks to Lisa for her kick-ass entry!), I was tempted not to do another one of these. But let’s give it one last shot.

It’s winter in my part of the world. My least favorite season. When people hear that I hate the cold, they always tease me about why I chose to move here in the first place. Good question. This city is renowned for its cold winters. However, it also has a pretty awesome, unique communications course, which is all I was thinking about when I packed my bags.

I grew up in a northern wasteland. I moved from one freezing climate to another, and I’ve had about enough of winter. So for this Fun Friday, please share your favorite winter memory OR a winter survival tip.

The only trick I’ve found to make winter bearable is falling in love with a winter sport. My poison of choice is sponge hockey, a unique-to-Winnipeg sport. It’s like ice hockey, except we wear spongee shoes instead of skates and use a sponge puck (which isn’t anywhere near as soft as it sounds). I suspect the rules are a little different, too. For instance, there’s supposed to be no contact in spongee, but as one of my team’s bruisers, I can tell you that isn’t the case. And women get away with a lot more than the guys do.

I first started playing spongee with my boyfriend at the time. I’d never tried it before, and wasn’t sure I would like it. And I was nervous about running on the ice in those funny shoes. I soon found the sport to be addictive. It was fun, it was fast-paced, it was fantastic exercise, and it gave me something to look forward to in the wintertime. I’ve played spongee when the windchill registered -53C and never even noticed the cold.

After my relationship ended, I joined a women’s team. It was a revelation. For once, female players weren’t relegated to the sidelines, or there just because they “had” to be (in spongee rules, a co-ed team requires two women on the ice at any time. Unfortunately, no rules force the guys to actually pass to you or even acknowledge your presence). Every one of my new teammates could have wiped the ice with the best men on my former team. They were fast, they were tough, and they were skilled. I was in awe. And I was very flattered that they accepted me as one of them.

Unfortunately, due to all the other demands on my time, I had to pass on playing spongee this year. But I will miss it. And winter will seem twice as long, I’m sure.

Your turn! What’s your winter story/survival tip? And if you don’t get winter, I’d love to hear about that, too! Let me live vicariously through you.