The world’s most haunted castle 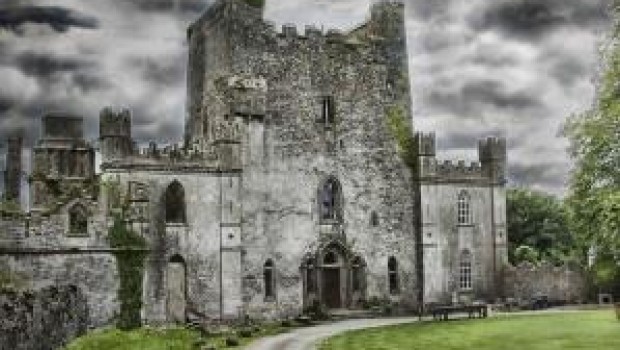 One of the most haunted castles in the world is located in Ireland. Pronounced “Lep,” Leap Castle was built in the 15th century for the O’Carroll family.

The O’Carrolls took the term “sibling rivalry” to Cain-and-Abel levels. One of the brothers became a priest, and while he was trying to hold a nice mass for his family, another brother plunged a sword into him. The poor priest died, and the once-holy space is now appropriately known as The Bloody Chapel.

Lest you think the O’Carrolls kept their blood lust within the family, records show that numerous people were imprisoned and executed within the castle. While the building was undergoing renovations, workers found a charming dungeon with spikes at the bottom–talk about a homey touch! Three cartloads of human bones had to be removed (I don’t know how much a cartload is, but it sounds like a lot.) Those who think getting impaled on spikes could be the newest extreme sport will be disappointed — the dungeon has since been closed to the public.

The castle is home to many different spirits, but the most terrifying is called It. (I wonder if that’s where Stephen King got his inspiration? ) It has a lovely decaying face and black pools for eyes. Appropriately enough, It smells like rotting flesh and sulphur. Mmm…exactly what you want to smell when you’re on vacation.

Shadows have been seen wandering the Priest’s House. (Presumably with no people preceding them.) Visitors have described seeing a burly man pushing a heavy barrel up the stairs. When he gets to the top, the barrel rolls down and then both man and barrel disappear.

If a man with a barrel doesn’t frighten you, the so-called Red Lady will raise a dagger as if she wants to stab you. She is said to be the spirit of a woman who was captured and raped by the O’Carrolls. Of course this wonderful family also murdered the resulting infant. You can kind of understand why she’s pissed.

In the charmingly named Murder Hole Room, there is a blood stain on the floor, said to be that of the ill-fated priest. And, like any good haunted site, there are phantom children laughing and playing.

Have you ever visited Leap Castle or any other famously haunted site? Anything unusual happen?