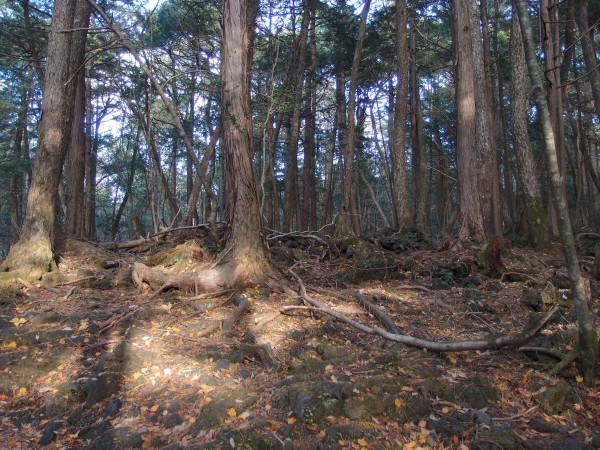 It’s one of the most beautiful places in the world, and certainly one of its deadliest. Aokigahara, otherwise known as Sea of Trees or Suicide Forest, was formed on top of a lava flow after Mount Fuji erupted in the year 864.

While lovely, Aokigahara is an eerie place. Though the forest is lush, it is strangely absent of the bird song and animal chatter you’d expect to find. What does exist is muted and hushed.

Compasses don’t work in the forest, and many travellers have gotten hopelessly lost.

These facts are strange, but they’re not the reason Aokigahara is famous. The forest got its sad reputation from all the people who have gone there to commit suicide. For decades, at least one hundred people have lost their lives in Aokigahara each year. In the 2000s, the Japanese stopped publicizing the body count, for fear the numbers encouraged others to do the same. It is believed many more than a hundred die there per year — due to the sheltered nature of the forest, it’s difficult to recover all the bodies.

As you walk through the forest, you may stumble upon a row of shoes, or a doll, or even a backpack. Many colours of plastic landscaping ribbon wind their way along the trails, marking paths in case the suicidal change their minds and wish to find their way back.

At the end of the tape, you will either find a body or some sign that a person has been there. As Azusa Hayano, a geologist who patrols the forest, says, “We always find something.”

During his patrols, Hayano tries to prevent suicides. Most of those who die in the forest hang themselves, and he was able to save at least one young man and talk him out of killing himself.

A sign at the entrance to the forest reads, “Your life is a precious gift from your parents. Please think about your parents, siblings and children. Don’t keep it to yourself. Talk about your troubles.”

There is also a number for the local suicide-prevention association.

However, it is not the locals who are killing themselves. Hayano says that those who live in the area are taught as children to stay away from the forest.

Aokigahara had a dark reputation before the suicides. Legend has it that the forest was once used for the practice of ubasute, or leaving one’s elderly parents to die.

Why do you think the forest compels people to commit suicide? Would you ever dare to visit such a place?

– With info from Suicide Forest. This is a beautiful documentary about Aokigahara that features an interview with Hayano, but it is depressing and a little disturbing. Warning: it shows photos of some of the corpses found in the forest.