Why do we carve Jack-o’-Lanterns?

Traditionally, Jack-o’-Lanterns were not the plump, cheery fellows we know today. Instead, they were designed to scare the shit out of you, as seen above.

Jackie here had an important job. His task was to frighten off uninvited guests.

The spooky gourd got his name from the tale of Stingy Jack, a man who gives new meaning to the term “playing with fire.”

Seems Jack liked messing around with Satan. He invited the devil to have a drink with him, but when the bill arrived, so did Jack’s stingy tendencies. He convinced Satan to turn into a coin that he could use to pay the bill. Apparently the devil wasn’t too bright, and once he was a coin, Jack tucked Satan away in his pocket beside a small cross to keep him from regaining his rightful form.

But carrying the anti-Christ in your pocket isn’t the most comfortable, as you can imagine, so Stingy Jack set the devil free under the condition that he wouldn’t bother Jack for one year, and wouldn’t claim Jack’s soul once he died.

Once the time of reckoning came a year later, Jack convinced Satan to climb a tree for a piece of fruit. While he was up there, the wily Jack carved a cross into the trunk so the devil couldn’t come down until he promised he’d leave Jack alone for another ten years.

Don’t feel sorry for the antiChrist–he got the last laugh. When Stingy Jack died, God didn’t want him and neither did the devil. So he now roams the night with only a burning coal inside a carved-out turnip to light his way.

The Irish called him “Jack of the Lantern,” which then became “Jack O’Lantern.”

Some believe that the Jack-o-Lanterns originated with All Saints’ Day, and represent Christian souls in purgatory.

This legend is why people in Ireland and Scotland began to make their own versions of Jack’s lantern, carving grotesque faces into turnips, mangelwurzels (whatever they are), potatoes and beets, and placing them by their homes to frighten away Stingy Jack and other wandering evil spirits.

Are you familiar with the story of the Jack-o-Lantern? Would you ever opt for a “traditional” version on Halloween? You’d need to give out way less candy.

With files from Irish Central.com 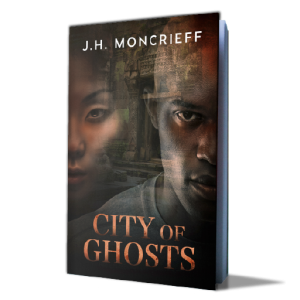 In honour of Halloween, I’m participating in Trick-or-Treat Reads. My treat for you is City of Ghosts, the very first book in my GhostWriters series.

On the day the villagers were forced to flee Hensu, not everyone got out alive.