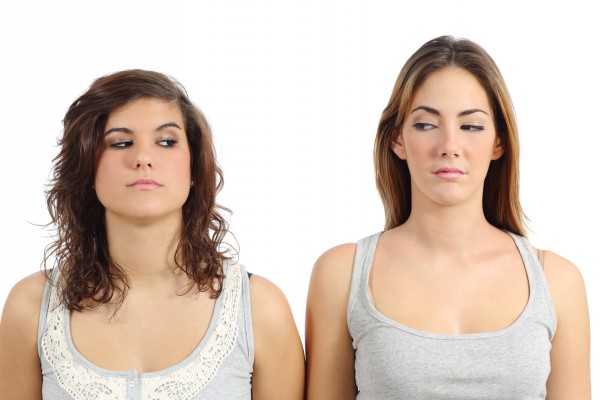 From an early age, my writing life was all about comparisons.

When I was a little kid I said, “I want to write a classic that will be remembered forever, like Charles Dickens.”

When I was in grade school, I aspired to be like Gordon Korman, who published his first book at age fourteen.

By high school, my writing teacher was calling me Stephanie Queen.

As an adult, one of the nicest things anyone ever said about my writing was that it read like a “young Gillian Flynn’s.”

It’s only human to play the comparison game–to look up to the people who are much higher on the ladder to mythical writing success. I say mythical because you never really get there. As soon as you achieve that agent, that publishing contract, that movie deal, there will be something new to strive for.

The comparison game can be a good thing…if it inspires you. Let’s face it–it can be difficult to put your butt in that chair day after day, writing novels that no one may ever read. Or, if they read, may not like. Sometimes seeing someone else’s success can motivate us to push on through the difficult middle. Through the days and weeks we don’t feel like writing. It may help us say no to distractions and excuses when we learn Stephen King writes every single day, including his birthday and Christmas.

The problem starts when the comparison game turns dark. Why not me? Why can’t these amazing things ever happen to me? I work hard; I’m a good writer. Where’s my seven-figure contract?

Maybe you have been working hard. But the thing to keep in mind is–no matter who you’re envying, you have no idea how hard they worked. For some reason, our industry loves to make success seem easy. How often do we hear about the bestselling debut? The overnight success? Debut, my ass. I bet you my imaginary seven-figure book contract that the “overnight success” has several novels gathering dust in a closet somewhere. Maybe they even published a few flops under a different pen name.

A lot of writers succeed in part because they have no choice. Think of J.K. Rowling, supposedly only a few food stamps away from homelessness when she feverishly wrote her first Harry Potter book. Stephen King was struggling to support his wife and kids on a low teacher’s salary. Jasinda Wilder, who has made millions from her self-published books, was laid off. She told herself she had a year to become successful. With no other alternative, that’s exactly what she did.

When writer envy rears its ugly head, one of my friends uses it as an opportunity to ask herself what she really wants. Then she can go after her own success with renewed vigour. I’d go one step further and ask, “Are you willing to do what it takes to get there?”

King was submitting his stories for publication when he was still in high school. His writing output is legendary. Even when he was in the hospital, recovering from a near-fatal accident, he still managed to finish a book or two. You can envy his success–many people do–but are you willing to have that level of dedication, day in and day out? That singleminded sense of purpose, that obsession? Very, very few of us are.

Instead of beating yourself up because you aren’t as successful as the J.K. Rowlings of the world, decide what success means to you. Is it more books on the shelf? More words written each day? A consistent writing schedule that you will actually stick to? Awards? An agent? A movie deal? Once you know what it is, you can go after it with King-like obsession.

It never hurts to research how others achieved the success you crave. Armed with that knowledge, you can go out and create your own path.

My writing group’s podcast is all about the comparison game this month. Check it out for more strategies on how to keep envy from being a destructive force, plus all the things that personally make each of us go green now and then.

Do you ever compare your success to other writers’? Does it depress you or motivate you? How do you keep yourself from getting the comparison-game blues?

The Insecure Writer’s Support Group’s purpose is to share and encourage. Writers can express doubts and concerns without fear of appearing foolish or weak. Those who have been through the fire can offer assistance and guidance. It’s a safe haven for insecure writers of all kinds.