Interview With a Warrior III 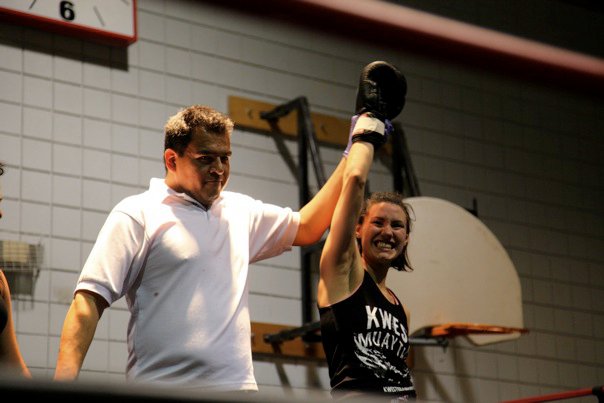 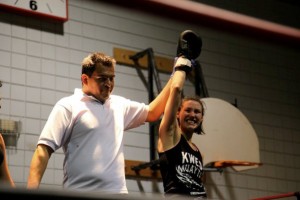 Marliese Friesen is one busy lady. It’s been six months since her debut in the ring, but it’s taken that long to catch up to her. Between graduating from university and going on a dream vacation in Australia and New Zealand, Marliese is definitely living life to the fullest.

Her first fight, which took place at KWest Kickboxing’s Rumble at the ROCC on December 3rd, 2010, resulted in a win by unanimous decision. Marliese kicked some serious butt! Here are her thoughts on fighting, training, fitness, and being a woman in muay thai.

Q. How long have you been taking muay thai?

A. About five years now. I took my very first class in the fall of 2005, partway through my second year of university. It was just Kru Kelly Westerlund then. That was about a year before Kwest Kickboxing became a certified World Muaythai Council club.

Q. Why did you start?

A. Essentially because I needed exercise. I spent almost all of my time either in class at university or studying at home, so I was pretty out of shape.

Q. Why muay thai in particular? What about it interested you?

A. I needed an activity that would get me back in shape but also serve as an outlet for pent-up energy and stress; I wanted to learn something new, but not just an ordinary sport; I wanted something considered unconventional for a woman (I like to go against the grain), and I wanted something tough and a little bad-ass.

Once I looked in to it, the idea of a martial art really appealed to me. I narrowed my interest down to a striking MA rather than a grappling MA. Kickboxing stood out because it incorporated fists and feet. I mentioned my thoughts to my sister and through a series of fortunate events and Kru Kelly’s generous nature, we were soon registered in a beginner kickboxing class at Kwest.

I was super excited when I found out that Kru Kelly actually taught traditional Muaythai, and not kickboxing. Kickboxing is sort of a simplified and safer version of Muaythai, as it only includes punching and kicking. Traditional Muaythai, on the other hand, also includes elbowing, kneeing, and clinching. So, I started because I needed exercise, but stayed because I fell in love with the art of Muaythai and Kwest.

Q. When/how did you decide you wanted to fight?

A. I had attended cards that included fighters from Kwest and just knew that I wanted to do it, too. Plus, I was training in the Level 2 class and just thought, why else would I put my body through this, if not to fight? But the timing was never right. University always took over and my attendance would drop. So after I graduated, I applied to train for the next fights and Kelly said yes.

A. The training was intense and draining, but totally worth it. I remember Kru Kelly saying, “If you train properly, the hardest part about a fight is the training”. Having seen other club members prepare for previous fights, I knew that it would take a toll on my body, but I don’t think I realized the huge amount of mental and emotional tenacity it would require.

Obviously the physically training was hard, especially when Kru Kelly had me work on my weaknesses, or when I felt like I couldn’t go another round or do another rep. But I think one of the most challenging parts was overcoming the doubt I had in my abilities and pushing through the periods where I questioned my potential for success. I knew that when I stepped into the ring I wasn’t just fighting for myself, I was representing Kwest and Kru Kelly. I put more pressure on myself to succeed because of that, and during the periods of self-doubt I wanted to step down so I wouldn’t embarrass my club.

There were times I wanted to give up, but the support and encouragement I received from Kru Kelly and the other fighters made all the difference. They brought me out of my slumps by showing me how far I had come and just how much I was good at. At the same time, I would quickly think over the things I had learned and the improvements I had made. As trivial as it may seem, doing this really helped my self-confidence, and gave me the mental and emotional strength to keep training.

Q. Take us through fight day–how were you feeling before, during and after the fight?

A. I was nervous the night of the weigh-ins, mostly because it finally sank in that I was actually going to fight. I felt a bit anxious the day of because I knew that something big was going to happen later. My excitement increased once I got to the gym and saw the other fighters and the gym all set up. But it wasn’t until I was warming up in the back room that my emotions became a bit more intense. I was anxious and impatient and didn’t really want to warm up, partly because I had this fear that I’d slip, injure myself and not be able to fight, but mostly because I just wanted to get in the ring and get it over with. Three months of intense training were all coming to a head and I just wanted it to be finished.

I just about lost it entering the ring, though. People had told me that I’d have tunnel vision as soon as I got out there but I didn’t. I saw all the people in the audience, I heard my entrance music, I saw my opponent. My nerves were shot at that point. I had already planned on sealing the ring once I entered it, so I used that time to take deep, slow breaths to try to calm my body down. It took me a while to seal the ring, and even then my body was still buzzing.

Once the fight started, though, my nerves calmed down a bit. I was still aware of everybody. I could hear a fellow fighter cheering me on from the back of the gym, and my opponent’s coach telling her what to do (very helpful, by the way). Thankfully, I could remember the drills we practiced, and the combinations I was to focus on. All the training was paying off, because I felt like I knew what to do.

Here’s a funny aside… Prior to my fight, I had been told that women’s fights are often more “scrappy” because our emotions get involved and we just let loose with the punches. I thought that was complete nonsense and, to be honest, was kind of offended. Ha! I distinctly remember taking a solid jab from my opponent close to the beginning of the first round and thinking “That b****! She just hit me!” I actually felt surprised and insulted that she would do such a thing, conveniently forgetting that hitting and being hit was the whole point. So much for remaining emotionless.

After the fight… I was wired. I couldn’t stop smiling. I couldn’t stand still. I kept playing with the zipper on my hoody. My boyfriend finally reached over, grabbed my hands and said, “Stop. Calm down”. It didn’t work. A couple hours later, though, the adrenalin wore off and I crashed.

A. Yes. Without a doubt! I had a good experience in the ring and aside from the aches and pains I absolutely loved my body at the end of training. Too bad it wasn’t beach season!

Q. What do you love most about muay thai?

A. Um… everything. I honestly can’t narrow it down. I love everything about it. It’s such a rewarding activity. Even the bruises, black eyes, and bloody noses are rewarding. They’re like little gold stars marking your achievement.

Q. Why is it a good sport for women?

A. First and foremost, learning Muaythai indirectly teaches you self-defense. After seeing me fight, my mom said that she was less nervous about me traveling around Australia alone because she knew that I could defend myself if I had to. Also, if you put in the effort, the changes in your body and mind are a great way to boost your self-confidence.

Q. Oh, and people are going to want to know how you got those muscles! 🙂 What is your training regime?

A. Ha! Well, during training, we did a lot of everything: cardio, endurance, strength, and flexibility. But to get the arms, basically a lot of burpees and push-ups to build and tone the muscles, and plyometrics and cardio/endurance exercises to burn off the fat so you can see them!! Easy, right?

Q. What do you do in addition to muay thai?

A. I run and bike occasionally. Otherwise nothing. I’d love to learn a grappling MA like Brazilian Jiu Jitsu, but for now, continuing with Muaythai at Kwest is enough for me!

Oh, and in case you missed my previous plugs, go check out http://www.kwestkickboxing.com/!

Thanks, Marliese! If you have any questions for her, you can post them in the comment section.