Interview with a Warrior II

I was lucky enough to be at Wayne Pokornik’s first fight over two years ago…which didn’t seem like a first fight at all. From the very beginning, he was a calm, controlled, and incredibly skilled fighter. Wayne never loses his cool, and he works harder than anyone else I know. This may be why he’s had such success–recently placing first in kickboxing and second in muay thai at an epic tournament in Calgary, and now besting his opponent, Carl Stewart from Offenberger, on Saturday night to win by unanimous decision.

Wayne completely transformed his physique before this fight, and his dedication to training is unrivaled. He is also the nicest person you could ever hope to meet, generously going out of his way to help everyone else. Since he manages to fit in a very busy family life (between Wayne and his wife Charleen, they have six kids!), I figured it was time to sit down with him and hear his thoughts on fighting, training, and life in general. Enjoy!

Q1) Congrats on your big win, Wayne! Can you take us through how you were feeling before, during, and after the fight?

A1) Thanks a lot, Holli. Before the event started I was pretty calm–after my pre-fight medical, I went to the back warm up room and had a nap. Once the event started, though, and other fights were going on, I became very excited! Then, when it was finally my turn to fight, I was focused and calm again. It was such a great feeling to walk out and see and hear how much support I had from everyone. I couldn’t believe how loud it was!

After the fight was over there was a lot of adrenaline and excitement going through me.

I was extremely happy I was able to put on a great show for everyone and get a win.

Q2) I’ve heard you got down to eight percent body fat. That’s insane! How did you do it? What training diet do you follow?

A2) I really impressed myself with my fat loss.

It started out with my gym Snap Fitness having a weight loss competition. It was a team competition, so I signed up with Charleen, Derrick (Fisher, another KWest fighter) and another friend of ours. Thru this competition is how I was able to find out my fat percentage.

But getting there was a lot of hard work. I started a (nutrition) program with Isagenix, and through Charleen keeping me on a healthy diet and the Isagenix program, as well as all my training at Kwest, my strength training, and cardio training, I was able to lose my fat.

Q3) You work harder than anyone else I know. How many hours a week do you typically spend training, and how do you manage never to get run down? What’s your secret? How do you stay so enthusiastic and pumped all the time?

I am not sure how I do not get over-trained. I have read a lot about over-training and the symptoms, but I haven’t had any effects of it yet. It might be as you told me once: ” a body in motion, stays in motion”.

I am always super excited to train, and look forward to it. I think it all really comes down to Charleen. She is my rock, without her none of this could be possible for me. She motivates me, she pushes me, and is there for anything I need. She is there with me every step, coming to Kwest and going to Snap Fitness with me.

Q4) When and why did you first get into muay thai?

A4) I wanted to take up a martial art. I looked around at the various clubs around my home. I looked at karate, tae kwon do, and kung fu, but when I saw muay thai I knew that was the art for me. I really liked how devastating but beautiful the art can be. I have been training for about five years now. The first few years were just on and off; it’s only been the past 2.5 years where I have been training on a full-time basis.

Q5) How did you first know you wanted to fight?

A5) After the first time I went to watch a live muay thai fight, I knew that day I wanted to step in the ring and fight. At that time I had only been training for a few months and never even sparred yet, so I knew it was going to be a while before I was ready. I was also at a point in my life where I was unable to train much. It wasn’t until I met Charleen and came to Kwest that I was able to train enough to feel ready and confident enough to fight. 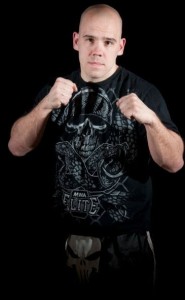 Q6) What’s the biggest challenge you’d still like to overcome?

A6) My ultimate goal is to fight professionally. I would absolutely love it if I was able to train and fight for a living.

Q7) What inspires you?

A7) My desire to fight professionally in my biggest inspiration. Each time I watch fights, it pushes my drive that much harder.

But also I find just learning and training is a huge motivator. Each time I train, spar or fight, I am just happy for the opportunity and try to learn as much as I can from it. Also Char’s desire to help me reach my goals keeps me inspired.

Q8) Why do you stay with KWest, not traditionally known as a fighter’s gym?

A8) I have trained at another gym that is typically known as a fighter’s gym, but left because I did not like the atmosphere and attitudes.

I came to Kwest and really love how everyone bands together to help each other out. I love how much support everyone is willing to show for each other. When someone needs help, there is never a shortage of volunteers.

Now with a few Kwest fight cards gone by, we see more and more fighters showcasing their talents and desires to be a fighter. I think as each fight card has passed, and as each fighter fights, this image of being a fighter’s gym or not is changing and will continue to change.

Now everyone can see Kwest is a great place to train no matter what your goals are. If you want to train to become a fighter, or just to get in shape, Kwest can handle your needs.

I have thought about fighting MMA (mixed martial arts) one day and I had started training jiu jitsu and wrestling at WAMMA (Winnipeg Academy of Mixed Martial Arts) but with me stepping up fighting muay thai lately I just have run out of time. But it still is another thing I want to do.

Q9) What do you feel is your greatest strength in the ring? Greatest weakness?

A9) My greatest strength, I think, is just my desire to fight. I just want to fight and compete–it doesn’t matter who it is.

My greatest weakness is almost the same as my strength. My desire to fight is so great I can be caught brawling instead of sticking to my game plan.

Q10) Did you plan out what you were going to do in the fight beforehand? If so, how closely did the actual fight follow the plan?

A10) I had a fairly good game plan. I had video of Carl’s previous fights and was able to set a game plan out. But my biggest plan was to just adapt as the fight went on. Use what worked and what didn’t.

But with that said, I didn’t follow my plan. I had combos I worked a lot on and didn’t throw them once. I also thought he was going to be tougher in the clinch and wanted to stay out of the clinch. But I didn’t follow that particular plan very well, did I? Hahaha.

Q11) What aspect of your training was the most beneficial to your success? The least beneficial?

A11) My biggest success came from all the clinching training. But I really don’t think any training can be “least beneficial”. As long as you are learning, you are going to benefit from it.

Q12) How do you balance training with such an active, busy personal life?

A12) It is very hard to balance work, training, family and fun. If it wasn’t for all of Charleen’s help, as well as my family’s understanding, it wouldn’t be possible.

With all my training, and my kids, who are all involved in something (did I mention I have six of them?), it keeps my life very busy.

I just want to say thank you again to everyone who has helped me in any way. Whether it has been training with me in the gym, coming to cheer me on at a fight, or to just passing on a good luck message to me, I appreciate it so extremely much and thank you all.

And one last big thanks to my rock. Charleen!