Interview with a Mountie – ask a cop your questions

I’ll never forget the first time I met Corporal Tyner Gillies. I was in author Jack Whyte’s masterclass, sweating bullets, waiting for the moment when Whyte would read my work in his wonderful Scottish brogue – and tear it to pieces.

As one of the only men in the room, Gillies stood out. But his work stood out even more. I quickly forgot my nerves when Whyte began to read Gillies’ story: it opened with a graphic scene featuring a team of police officers discovering a badly decomposed body. There was something different about his writing – something grittier, more authentic, more real than anything I had ever read – even though I’ve read tons of true crime. Gillies’ work was gruesome, it was dark, and it was funny as hell. Of course I had to meet the person who would write something like that.

We’ve been friends ever since. 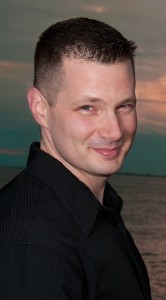 In this interview, Gillies gives you a rare peek into what it’s really like to be a member of the Royal Canadian Mounted Police, with the honesty and heart he is known for. Ask him anything you like, and he’ll try his best to answer. Anyone who leaves a comment or a question will be entered to win a copy of Gillies’ new release, Dark Revolution. Winners will be chosen at random.

Q1. How long have you been a cop? Why did you become a cop? And why/when did you start writing?

A1. I’ve been on the job for 12 years (anniversary in two weeks, hooray!) I grew up watching the cheesy cop shows, and when I was eight years old I thought that scoring a job getting in high-speed chases would be a good idea. As I matured, so did my ideas about what policing meant. The adolescent desire for intensity gradually grew into an honest desire to do good, to do the right thing when there were obviously so many wrongs.

I started writing in high school, with little short stories and what not, but got serious about it after I graduated from Depot and got posted to Surrey. Growing up, stories were a big part of my household – my parents were not particularly well educated, but they read a lot and encouraged me to do the same. My love of stories led me to want to write some myself.

Q2. What is the strangest situation you’ve ever encountered on the job?

A2. I think any time you have to deal with someone who is naked, it adds a special level of strangeness to an encounter. A couple years ago I went to a call where a man was butt naked and eating a curtain in a really sleazy motel. Needless to say he needed medical attention.

Q3. What is the scariest?

A3. Every encounter you have as a street cop has the potential to be scary because human behaviour is the one great, unpredictable element in every interaction. The most recent scary call I’ve been to involved a man holding a woman hostage. My team and I had to get engaged and I was terrified throughout the encounter for the life of the hostage. We brought it to a peaceful resolution but it was really intense.

Q4. What do people often get wrong when writing about cops?

A4. The two most common errors I see when I’m reading police procedurals or thrillers is the aspect of forensics (especially with fingerprints) and reference to equipment.

I read a book recently that, while being a superior story otherwise, had some abysmal errors in it as far as the handling of equipment goes. One of the characters, a cop, was going into a house where the bad guy might have been hiding, drew his weapon, and racked the action to chamber a bullet. The thing that makes it so wrong, is that no cop, ever, would carry their sidearm without a bullet chambered, ready to go. If you were to get into a situation where you really needed to use your sidearm, there would be no time to chamber a bullet, and it would be a fatal error.

Q5. What are a couple of details that would make a writer’s police stories more authentic?

A5. If you have a detail that you’re not sure about, go ask a cop. If you go down to your local detachment/station, tell them you’re a writer and would like to talk to someone about a few general research questions, someone is going to be willing to talk your ear off about all the things TV and novels get wrong.

Understand the equipment and how it works. For example: a pistol with an extractable magazine is not a “revolver.” If you put in a detail that is wrong, it is going to pull your reader right out of the story, likely in a way that is unrecoverable. 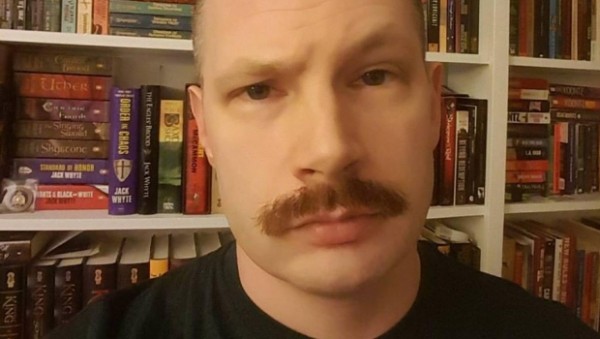 Gillies with his unfortunate Movember mustache, which he nicknamed “Benson.”

Q6. How has your job influenced your writing?

A6. The greatest benefit my job has lent to my writing is the copious amounts of grist I get for the mill. I meet so many interesting people (some because they are very strange, and some because they are very cool), and encounter so many exceptional circumstances that I am rarely ever without ideas for a story. Even if the story isn’t policing related, there is usually something from my work life that sneaks its way in.

Q7. How do you manage to balance writing with police work?

A7. I am very fortunate in the fact that I work a four-on, four-off schedule. I have almost zero free time during my working block, but on my days off I usually get down some words. Often I have to battle through bouts of lethargy and exhaustion and force myself to sit down at my writing desk, but I’m generally successful in putting my time in.

Q8. What is the most difficult part of being a cop?

A8. The hardest part about the job is seeing how people have been affected by the circumstances that lead them to have contact with me. The father of one of my best friends told me when I left to join the Mounties, “The only time you’ll talk to good people is when something bad happens to them.” This hasn’t been universally true, but it is awfully close.

While it is nothing compared to what the victims of crime and their families feel, it takes a toll on the first responders when we have to show up and be first at the scene for a murder, or tell someone their child has been killed in a vehicle collision. I think that is one of the reasons that PTSD for first responders (Police, Fire and Medics) needs to be addressed. No matter how strong the individual, if you see enough of the bad side of life it is going to leave a mark.

Q9. What makes it worth it?

A9. The days when you really get to help someone out: save a life, protect someone when they’re terrified, even make someone feel better about something bad that has happened to them, make the bad days all worth it.

Q10. What do you wish the public knew about cops?

A10. I think people often forget that cops are people, same as anyone else. Are there cops that have done wrong? Of course there are, but I think that people forget that 99.9% of us are good and do the right thing every day. And those of us who love our jobs, and walk that thin blue line, don’t want to work with the crooked bastards any more than people want to be policed by them. 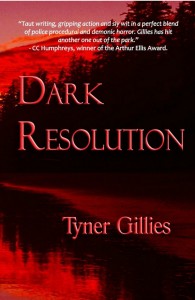 Thanks so much for the awesome interview, Tyner! Now it’s your turn–ask Corporal Gillies anything you like. Anyone who leaves a comment or asks a question will automatically have an opportunity to win a copy of Gillies’ new release, Dark Resolution. The lucky winner will be chosen at random and notified on January 19, 2016.

Two years have passed since Quinn Sullivan vanquished the Demon of Resolution Cove armed with only Autumn Donnelly’s dagger. Now new forces conspire to test the Guardian once more as he is sent to discover who, or what, was behind the suicide of Inspector Green’s son. Little does he expect what awaits for him in the mountain town of Cranbrook.

Devoid of the Guardian’s protection, Quinn’s fellow RCMP constables are set in a trap they cannot escape as piles of human bones begin turning up. A serial killer is on the loose, searching for a little girl with abilities that will release others of its ilk to rain Hell down on earth.

Armed with only Autumn’s dagger and her courage, Quinn must save those he loves, lest they too become nothing but bones. To win, the Guardian must make a sacrifice. For him to succeed, one must fall.