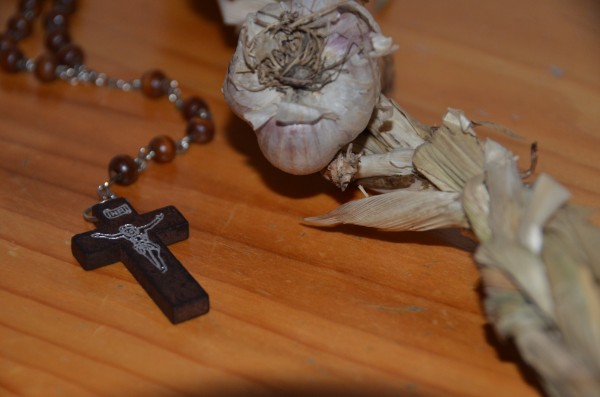 You know those decorative strands of garlic everyone had in their kitchen back in the ’80s? Well, the trend started here in eastern Europe, and it had nothing to do with style.

Here, garlic is used for protection, and this is taken quite seriously. What, did you think Bram Stoker made everything up?

The rest of the writers arrived this evening, a few hours later than planned. I was beginning to think I’d missed everyone, it was so late. Everyone seems excited and exhausted in equal measure. It’s an early night for our group. We have a hectic week ahead of us.

Our Romanian friend Laurentiu Dragan, who runs the Mama Cozonacilor with his family, greeted everyone with a rosary and a braided strand of garlic. “In Hawaii, they have the lei. Here, we have the crucifix,” he says. Everyone laughed, but we soon learned this isn’t a joke to the Romanians.

After dinner, we were led into a room and blessed by two Romanian Orthodox priests. The priests mixed dried basil with the holy water and used the bouquet of basil to sprinkle the water on our bowed heads. They also touched a crucifix to our lips. This blessing is for protection from evil and for good thoughts, but I suspect the Romanians hope it will also counteract any trouble twelve horror writers manage to stir up.

When people refer to this part of the earth as the “Old World,” they’re speaking more truthfully than they know. Romanians have a core set of values that have been lost in much of western society. Family, faith, home and hearth–respect–are everything. You know what I haven’t seen in this country? People walking around staring at their cell phones. I’ve seen people talking, people laughing, people sharing food and selling food, people playing chess.

I think we might learn something much more important than how to write a scarier story.