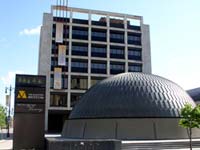 One of the best ways to appreciate what you have is to lose it. As I prepare to say goodbye to the wonderful museum where I have worked for the past seven years–and the amazing people who make it what it is–I find that even the things I used to dread are now precious, because I won’t have them much longer.

The museum is a unionized environment, and as such, we have two “mandatory” fifteen-minute breaks. For a few years, I’ve skipped these breaks because I’ve been too caught up with getting things done. But now I regret that, because those thirty minutes a day are spent with some of the most incredible people I’ve ever met–people who fix things. People who protect our history. People who show children how to love science and archaeology. People who conduct research and do everything they can to learn more about endangered species and how to save them. And, of course, people who make money so everyone else can continue to fix and protect and teach and research. It’s a diverse group, but one that is fiercely devoted to a common goal, which binds us all together. Most people who are hired by the museum stay until they retire or are forced to go…which makes me an anomaly. In so many ways, I already don’t belong anymore. It makes me sad.

So, for my last two weeks, I’ve been going to every break, just to enjoy the company of these people while I still can.

It was a Friday afternoon, and everyone was a bit exhausted from handling the spring break crowds–our busiest season of the year–and perhaps a little worried that it wasn’t quite as busy as it should have been.

Sitting beside me was the man who keeps the planetarium and science gallery and pretty much everything else in running condition. But he is so much more than that. He is a daily lesson on how to live your best life, and he has the best collection of amusing true stories in the world. Everyone loves him, and rightly so.

Across from him was the man he’s shared an office with for probably close to twenty years, the audio-visual specialist who takes amazing photographs (even though that’s not his job), predicts the weather flawlessly if you ask, and is easy to write off as quiet, but who will talk your ear off if he trusts you. He has the type of laugh that makes everyone else laugh, too, and there isn’t a mean bone in his body.

We were soon joined by our 3-D designer, whose job it is to turn the scientists’ ideas into the exhibit spaces we walk through and marvel at….and the museum programs developer, who somehow manages to turn topics like the Second World War into something children will find interesting…and the I.T. department, who is really only one guy who used to be an archaeologist…but that’s a long story.

It was a normal break, with all of us sacked out on faux leather couches, chatting about shows we love and Girl Guide cookies and whatever else struck our fancy, when in walked the director of fund development. He was carrying a package of microwave popcorn. He lined a wicker bowl with a napkin, poured in the freshly popped corn, and sat down on the couch, handing us each a paper towel to wipe our greasy fingers.

It was a simple thing…a small thing. Hardly worth noticing to a lot of people, and if I didn’t write it down, I probably wouldn’t remember it a year from now. But there we were, on a Friday afternoon, a group of co-workers sharing a bowl of popcorn. It’s amazing how a shared snack turns colleagues into friends.

It is time for me to leave this place, and the people that I love. I did what was best for me, and I know it, but that doesn’t make it easy. There is something so rare about a workplace that not only allows that kind of camaraderie, but encourages it.

And it will take a long, long time not to miss it anymore.