F is for Fata Morgana 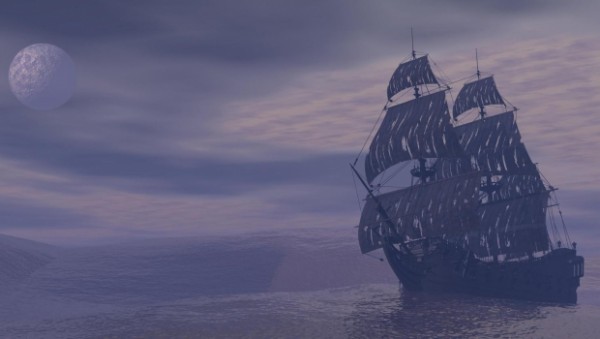 A ghost story is only as believable as the teller, and few witnesses ring as true as crusty ol’ hardbitten sea captains.

This could be one of the reasons tales of ghost ships have been passed on for hundreds of years. Who could forget the Flying Dutchman?

As it turns out, those sailers were telling the truth. They were seeing ships that floated above the water, flickering in and out of view, or disappearing completely.

It just had nothing to do with ghosts.

Enter Fata Morgana. Ms. Morgana is a super mirage named after the treacherous fairy, enchantress, and half-sister of King Arthur. (Tarkabarka should like this reference.)

As the sun warms the air above the ocean, it creates a gradient of temperatures. The air closest to the ocean is still cool, but sitting above that is a layer of warmer air.

Light doesn’t necessarily travel in a straight line. When it comes in contact with two layers of atmosphere that are different temperatures (and therefore different densities), it bends and travels through the new layer at a different angle.

The rest of the effect is caused by how the brain works. When light reaches your eyes, your mind assumes it arrived there in a straight path between you and the object reflecting the light. So if light is bent on its way toward you, your brain will think the object is where it would be if the light’s path was straight. This explains why objects under water will appear to be in a different spot than they really are.

To create a fata morgana mirage, light reflecting from something in the distance, like a ship, bends downward as it passes through the colder, denser air near the surface of the ocean. Your brain places the object where it would be if the light came to you in a straight path—higher than it actually is. This bending effect can even work with the curvature of the Earth if conditions are right, which is why some fata morgana images can be refracted cities and ships from beyond the horizon.

Pretty cool, huh? However, those ships that turn up with mysteriously missing crews or that disappear completely? You’re on your own.

Have you heard of the mysterious Fata Morgana? Were those sailors seeing super mirages? What do you think?

P.S. If you like ghost ships, you’ll love this story about the RMS Queen Mary!