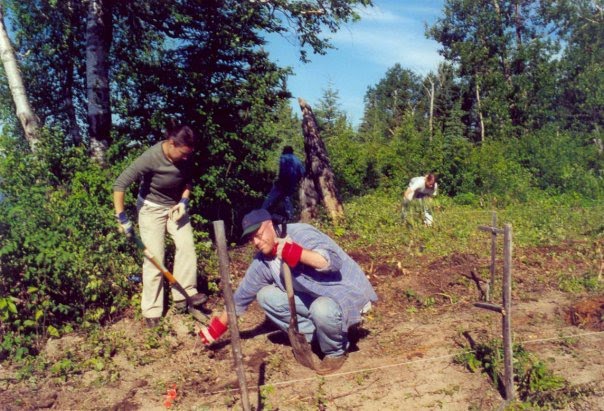 A Forensic Anthropologist Answers Your Questions
You asked, and Finch answered! Here, at long last, are the answers to your gory questions. I don’t recommend reading them while eating lunch.
1. Elspeth Cross:

Is there a point where DNA can no longer be taken from bones? (‘Cause, on the ever-accurate television, after a certain point, they seem to need teeth).

Yes. DNA degrades over time at a rate that varies depending upon local conditions. Negative factors may include microbial action, heat, radiation, dessication, and chemical activity. Generally speaking, warm wet conditions are detrimental for DNA preservation, just as they are for soft tissue, and this degradation can occur in a short period of time. Teeth are preferable for DNA extraction because dental tissues effectively seal in the good stuff. This is a case where television is right.

There are two types of DNA testing used in forensic work: RFLP and PCR. RFLP uses larger amounts of DNA and it must be undegraded. It cuts the DNA with enzymes and sorts it, comparing it to known sequences; the results are precise but material-intensive. PCR is faster and less fussy but it is susceptible to contamination by microbes and other people present at the scene. Effectively, PCR amplifies the amount of DNA present regardless if it is from the person or not. PCR has tended to replace RFLP-based analysis in a medicolegal context.

DNA has been successfully recovered from Neanderthal remains dated to 38,000 years ago. This was the starting point of the Neanderthal genome project headed by the Max Plank Institute. The problem is that DNA of that age is degraded to the point where it must be reassembled — think of a jigsaw puzzle, except someone has cut the pieces in half.

Bones do have a smell, although that of dry bone is very faint, like dust (unless burned or cut, so sawing through bone smells very much like sawing through antler). Treated bone may smell like bleach (if someone was silly enough to use it — it will make bone crumble over time by removing collagen). It depends on whether or not the bone has been degreased. Bone with a higher organic content, often called green bone, will have a fatty scent and feel. I don’t think that there is a considerable difference in smell between animal and human bone.

I’d say that much of the smell would come from surrounding conditions: a catacomb or reliquary full of bone will smell dusty; a charnel house would smell foul; a lab would smell like a lab; etc. As you are aware, scent is a primal sensation: it is very powerful in triggering memories but it is very difficult to describe. My advice is to collect some bone and find out for yourself.

Will the skeleton of a body that has not been moved stick together? Does cartilage rot like skin and muscles? Would you have an intact skeleton or just a pile of bones? (Bonus question: would a Manitoba winter interfere with determining how long a body has been dead?)

Connective tissue such as cartilage and ligaments will decay unless dessicated or otherwise preserved. As a result, skeletons become disarticulated. Tougher tissues will take more time to decay than softer ones, so a body left exposed above ground for six weeks in a Manitoba summer may have a few sinews on its spine and joints. Unless disturbed, the remains will retain their original articulations; in the above example animals would probably disturb the remains by gnawing or dragging bones away from the scene. Disturbances can also be human-caused (anthropogenic) or due to natural (taphonomic) factors such as soil movement, frost heaves, erosion, animal burrows, tree roots, etc.

Can you tell me anything about bones of fetus & mother, mother murdered near term and buried in shallow tropical sea-side grave and uncovered forty years later. Will fetus bones survive? Is it possible to distinguish between bones of unborn fetus and that of infant in mother’s arms?

Fetal remains will preserve if the conditions are right. If the soil is particularly acidic, there may few or no elements present. Tropical soils tend to be shallow and leached of organics, so the resulting bone will probably be in poor condition unless the soil is protected (i.e. in a dry spot).

Fetal remains are distinguishable from infant bones based on dental eruption and fusion of the growth plates (epiphyses) in the long bones. Generally speaking, the younger the remains, the easier it is to determine their age but the harder they are to recover intact. There may be some fuzziness around the time of birth, as a perinatal fetus is essentially indistinguishable from a perinatal infant. However, the bones of a fetus at the 7 month mark are clearly distinguishable from those of a newborn, infant or toddler.

If you have questions on specific timing, check out an osteology manual. I’d recommend ones by William Bass, D. Gentry Steele or Tim White.

Here’s my scenario. A soldier dies in a futuristic suit of powered armor and the military never recovers the body. The suit is completely moisture-sealed and has not been breached. There is airflow into the suit, but it passes through nuclear-biological-chemical filtration. The soldier himself is wearing synthetic cloth fatigues.

Thirty years later, someone finds and opens the suit. The suit has been in a standing position the whole time. What is the soldier’s state of decay? What does the body look and smell like? Is there residue left inside the suit?

The more exposure that remains receive to the outside environment, the less remains that will, er, remain. However, you have to remember that the human body is itself an environment for all sorts of interesting flora. This situation is analogous to exhuming Victorian caskets that were lead-lined and rubber-sealed. In other words: you got soup.

The soldier’s body likely contains bacteria, primarily in the gut, so the body will be affected normally by post mortem decomposition. If the environmental seal is something like a nano barrier, a molecular membrane that keeps water in but allows gases to escape, then the post mortem environment within the suit will likely be ghastly. The remains might be skeletonized but surrounded by liquefied tissue and perhaps adipocere if ambient oxygen levels were low. Adipocere is a saponified lipid — essentially the body fat turns to soap, though it smells less like Irish Spring and more like ammonia and rotten underwear. If the external environment were poor in oxygen then you would likely see more adipocere formation and thus more solid goo adhering to the bones. Decomposition tends to create a fair bit of gas so the internal pressure of the suit may be higher than standard; not enough to make the suit burst but enough to hiss and spray a bit when the seal is cracked. The synthetic cloth will be intact but may be degraded somewhat; still, I would not recommend shaking it out and trying it on.

The boots would be particularly full.

The smell of putrefaction will penetrate materials, including metal. There are countless cases of cars going to the junkyard because the smell won’t get out where Uncle Ted died that hot weekend. I once heard of a recovery of a drowning victim who went through the ice in a snowmobile accident. In spring someone snagged the body in a net. The RCMP took their boat out, hauled the body out, and grabbed it by the sleeve of the snowsuit. The snowsuit was all that was keeping the body together and when it hit the deck, the suit spilt like a bag of stew. The boat was a write-off and could not be sold at auction. You might avoid this fate through using perfect materials — crystalline metals with few airspaces — but I’d replace the suit liner before using it.

So… if the moisture could be vented from the suit, then someone else could use it after a good hosing out. If the pilot had to wear a catheter (like in some spacesuits) it might continue to function after death and reduce the quantity of body liquor. Or, if conditions promoted dessication of the remains — low humidity, perhaps high radiation — you could just move the dead guy out and climb in the cockpit.

I have forgotten how long it takes for the blow flies and maggots to show up, is it three days?

Maggots will colonize the remains almost immediately but really get going once putrefaction sets in, i.e. after three or four days (depending on climate). I hate to use Wikipedia as an academic reference but the following link should be useful not only for describing the timing of insect activity but for defining the phases of decomposition:

Also how long will it take for a body to decompose if packed in dry ice?

If the remains are packed in dry ice, you will be dealing with a frozen corpse. It will store indefinitely though over time it will suffer the changes associated with freezerburn. If the dry ice sublimes entirely, the body will begin to decompose once it warms up.

Gods, that was some morbid business. You folks need to get some fresh air.