It’s fitting that the RMS Queen Mary was once known as the Grey Ghost, for tales of the supernatural have been plaguing her ever since World War II.

Perhaps plaguing is not the best word, as the ship’s so-called haunted history is one of the only things keeping her afloat.

Since the late 1960s, the Queen Mary has been docked in Long Beach, California, with a second life as a hotel and restaurant. Ownership of the great ocean liner has passed through many hands, only to be put up for sale again and again in the face of financial difficulties.

This changed when the decision was made to market the ship as a haunted attraction, which was undertaken with all the fanfare of Disney, who just happens to have been one of its former owners. During the ship’s Ghosts and Legends tour, fog rises from the abandoned first-class pool where a little girl supposedly drowned. Light effects and a “ghost cam” complete the illusion.

Contrived scares aside, the Queen Mary certainly has enough blood on her bow to give people nightmares. Back in World War II, she accidentally rammed one of her escort ships, sending 239 people to their deaths. Then there is the chilling story of John Pedder, a crewman who was crushed underneath one of the liner’s watertight doors.

Almost 50 people died on the ship during its era as a luxury liner, and no one knows how many soldiers and POWs perished on it during World War II. Some areas of the ship are reportedly so haunted that the only way to visit them is as part of an official tour, with ticket prices running just shy of $40 for adults. Hmm… 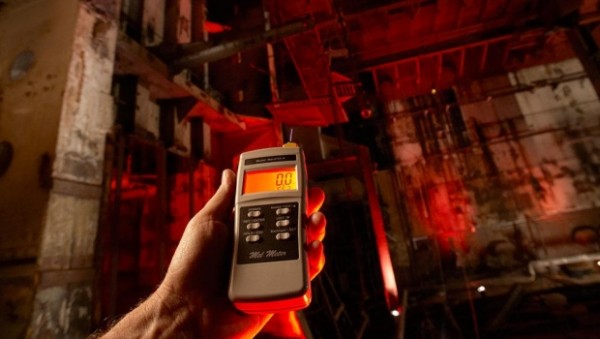 I love a good ghost story as much as the next person, but this article introduced me to a different perspective. The author argues that focusing on the so-called “hauntings” is damaging the Queen Mary’s actual history while disrespecting the real people who lived and died on her.

In some ways, I agree with him. But I also think that these ghost stories–fictional or not, exaggerated or not–most likely saved the ship from that Great Scrapyard in the Sky. Isn’t a haunted Queen Mary better than none at all?

Since I began this blog, I’ve made a point of visiting some of the world’s most haunted attractions, from Romania’s haunted forest to Italy’s haunted island. I was excited to add the Queen Mary to my list when I attended StokerCon and stayed overnight.

Have you ever visited the RMS Queen Mary? Would you be brave enough to spend the night? Do you think ghost tours are disrespectful or good business? Do you believe in ghosts?