C is for Curse

Human beings are superstitious by nature. Many of us believe in good luck charms, but how about the opposite? Could curses really exist?

James Dean remains a Hollywood icon, even though he only made three films before he died–two of which had not yet been released upon his death. Part of the reason he’s still known today is the mystery surrounding his early death…and the car he died in.

Dean, a racing enthusiast, snapped up one of three Porsche Spyders that arrived in the U.S. in 1955. The Spyder was designed especially for racing, and Dean had it customized by George Barris, who added racing stripes, the number 130, and the name “Little Bastard.”

And a Little Bastard it would prove to be.

Only nine days after purchasing the car (and less than two weeks after appearing in a safety commercial where he warned young drivers against excessive speed), Dean was killed when his car struck another vehicle head-on. He was only 24 years old.

Adding to the mystique was the fact that many people in Dean’s life had “bad feelings” about the car and warned him, including actor Alex Guinness and Dean’s girlfriend Ursula Andress.

Barris bought the wreck and salvaged what he could for parts. While the car was in his possession, two thieves attempted to steal the steering wheel and seat covers, tearing up their arms and receiving other injuries in the process.

William Eschrid purchased the Little Bastard’s engine and other parts, which he loaned to his friend, Dr. Troy McHenry. The parts were in McHenry’s car when he lost control in a race 13 months later, hitting a tree and dying instantly. On the same day in a separate race, Eschrid was severely injured and almost lost his life as well. The Little Bastard’s engine was in his Lotus.

Two salvaged tires from Dean’s car blew out at the same time, causing their new owner’s vehicle to skid off the road. 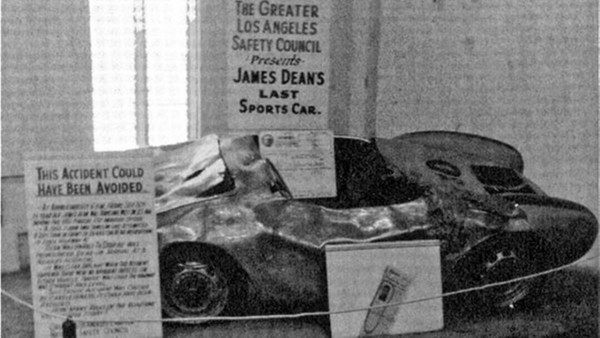 While transporting the car to the exhibit, the driver was in an accident. Dean’s car then killed him when it rolled off the flatbed and crushed him.

When the Little Bastard was removed from another flatbed, it slipped off the dollies and broke the attendant’s legs.

It was then stored in a garage, which caught fire and burned down. By all reports, the car appeared to be untouched.

While on display at a high school, Dean’s car fell off a display, breaking a student’s hip.

Finally it disappeared during transport and hasn’t been seen since. Although the Volvo Auto Museum has offered a reward of one million dollars, resulting in some promising leads, the Little Bastard remains in hiding.

What do you think–can objects be cursed? Was James Dean killed by a curse, or did the Little Bastard become cursed after his death? Would you feel safe riding in a vehicle that contains a piece of that car?

PS – If you enjoy stories about curses, you’ll love my novella The Bear Who Wouldn’t Leave, which features a cursed teddy bear.