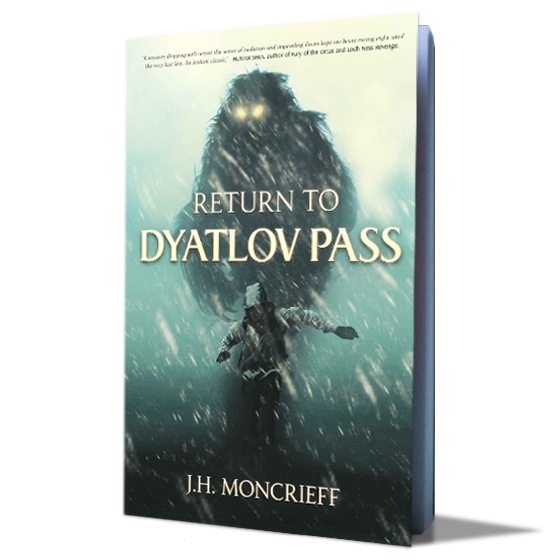 Some mysteries are best left unsolved.

“Return to Dyatlov Pass will freeze your blood! A mystery dripping with terror, the sense of isolation and impending doom kept my heart racing right until the very last line. An instant classic.”

Hunter Shea, author of Fury of the Orcas and Loch Ness Revenge

“Impressive tale that is a strong contender for my “Best Reads of 2018″ list. Highly recommended!”

“Get ready to be cold and afraid. Every time I started reading this book, I got so cold, it felt like I was in the story. It was loaded with suspense, and humanity at its worst and its best. My eyes are blurry from reading, and I am sad it’s over.”

“If you need some creepy with a side of what the f*ck to it, this is your book.”

“Superb read! I was turning the pages so quickly as the story gripped me from the get-go I nearly wore a groove in my tablet’s screen. This could be J.H. Moncrieff’s best work so far. Definitely recommended.”

“J.H. Moncrieff delivers one of the best third acts I’ve ever read in a book. The ending is incredible. My jaw hit the floor and I couldn’t stop thinking about it. This book should be optioned. I would love to see it in the theater.”