Why I believe in Nessie, the Loch Ness “monster” 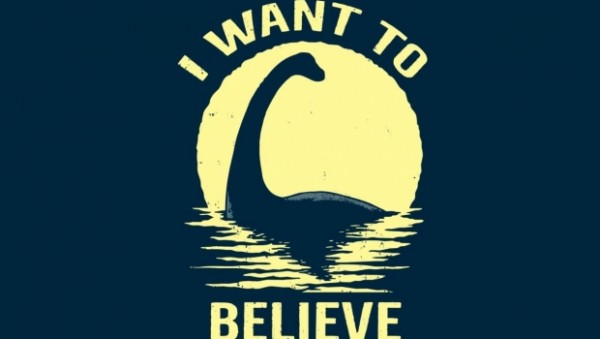 I’m guessing a lot of you have bucket lists. It won’t surprise many of you to learn mine has a separate section just for travel.

One of the longest standing places on that list is Scotland, and it’s not just because I have an affinity for haggis, men in plaid, and Scotland the Brave when played by a piper. It’s all about Nessie, the so-called Loch Ness “Monster.” It’s my dream to sit on the banks of the great lake for hours, waiting for the fabled creature to make an appearance.

Nessie is only a “monster” because of our own xenophobia. She’s simply a creature who hasn’t been officially discovered, catalogued, and researched yet. (Or she’s one we believed to be extinct who has somehow miraculously survived.)

Ever since I began this blog, people have asked me if I really “believe” in this stuff. Honestly? I like to keep an open mind. A lot of the things we now accept as part of our daily lives (powerful computers that fit in our pockets, cars that run on electricity instead of gasoline, prayer being scientifically proven to have health benefits for the ailing) were thought improbable or even impossible not so many years ago.

So, while keeping an open mind is important to me, an even more accurate answer would be…I want to believe.

When I was a child, I was one of the last people in my class to stop sending my wish lists to Santa Claus. One day my best friend came to me with inarguable proof that the great elf was not what he seemed–her parents had told her the “truth.” I was stunned. Shocked. Heartbroken. I confronted my own mother, asked if it was true. Her answer was something I’ve never forgotten:

“Santa Claus will exist as long as you believe in him.”

What a beautiful sentiment. For me, it’s the same with Nessie. She exists if we believe she does, and I don’t know about you, but I personally want to believe. I need to believe, in my heart of hearts, that there’s still magic in the world. There’s still things out there waiting to be discovered, questions we don’t have the answers to. Intellectually, I know that if the original Nessie still called the Loch home, she’d be very, very old. But why not? Parrots and elephants and tortoises can live for an extremely long time. Why not Nessie? As far as I’m concerned, the world is a better place with her in it. 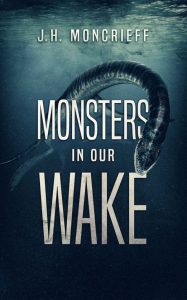 When Severed Press asked me for a “sea monster” novel, I had Nessie in mind, which is probably why the creatures in my resulting book aren’t monsters per se, but highly intelligent beings with the right to live in peace. Monsters in Our Wake is unusual for other reasons too–protagonists in this kind of story are usually macho men with more fire power than brains, while mine is a female scientist suffering from anxiety. Needless to say, I wasn’t sure what the folks at Severed would think of a sentient sea creature telling his story, never mind my underdog heroine, so it was a big relief when they said the words writers all live to hear:

“We’d love to publish this.”

Guess there is some magic left in the world after all.

Monsters in Our Wake has been unleashed on the universe in ebook form to start (trade paperback to follow shortly), and it could use some love in the way of reviews and blurbs. Even a sentence or two and a star rating would help tremendously. If you’d like a free copy in exchange for a review, please let me know in the comments. Need a good creature feature on your blog? I’m up for any and all guest posts.

And I’d love to know what you believe in. Have any of you visited Loch Ness? Caught a glimpse of the old girl herself? Please share your experience in the comments. What’s on your bucket list?

In the idyllic waters of the South Pacific lurks a dangerous and insatiable predator; a monster whose bloodlust and greed threatens the very survival of our planet.

Thousands of miles from the nearest human settlement, deep on the ocean floor, the creatures have lived peacefully for millennia. But when an oil drill bursts through their lair, Nøkken attacks, damaging the drilling ship’s engine and trapping the desperate crew.

The longer the humans remain in Nøkken’s territory, struggling to repair their ailing ship, the more confrontations occur between the two species. When the death toll rises, the crew turns on each other, and marine geologist Flora Duchovney realizes the scariest monsters aren’t below the surface.