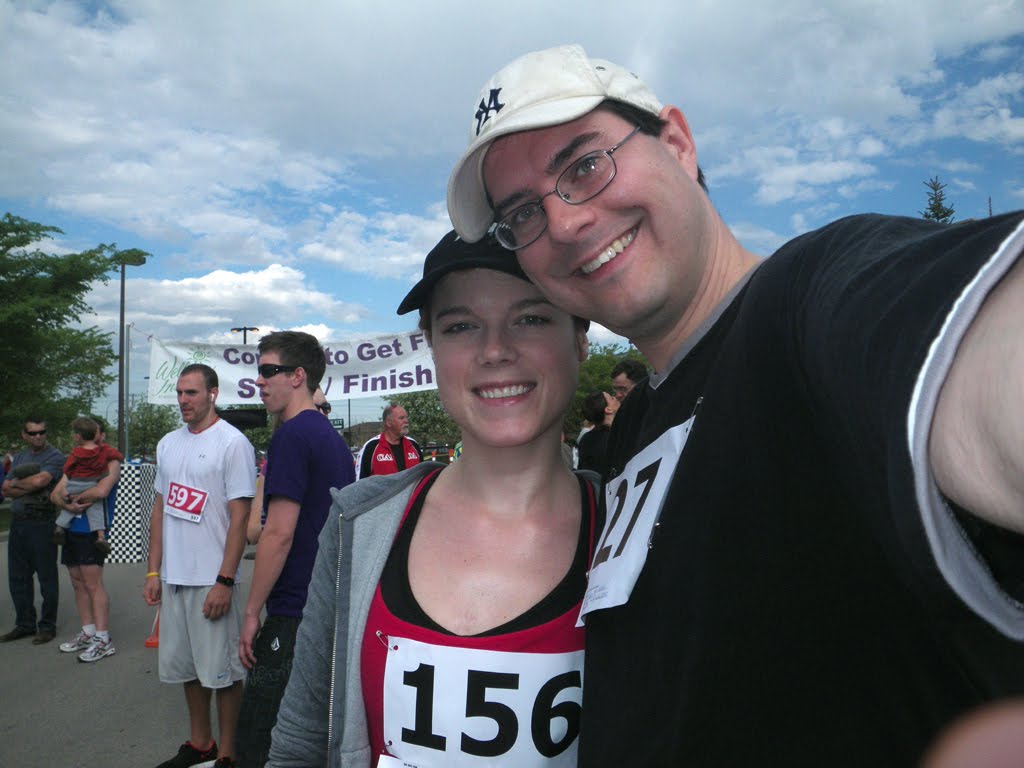 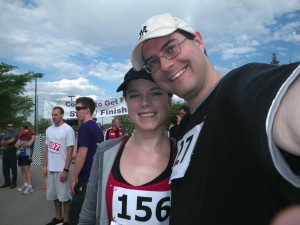 Goal one on this blog has been achieved! The Boy and I ran our first 5K race together. This was the first race either of us had ever participated in, and we ran it together, holding hands as we passed the finish line. It was a great bonding experience.

Life threw a few obstacles in our path, naturally. The Boy has been suffering from the odd knee/ankle issue that kept him from training as much as he wanted to. And, aside from the Making the Cut project–which involves very little running–I haven’t been training at all.

We anticipated being able to get to the 9 a.m. race with plenty of time if we called a cab by 8 a.m. As is par for the course with us, we were a bit late. We called at 8:10, not realizing we’d be stuck on hold for several minutes. Finally, The Boy managed to reach a live human being, although it might have actually been a zombie, since our address had to be repeated and spelled out several times. As The Boy pointed out, “even the pizza guy knows our address, and he only comes here a few times a year.” We take cabs all the time, and ours isn’t an unusual or difficult address, so I’m not sure where all the confusion lies.

We waited. And waited. And waited some more. It looked like we weren’t going to be able to participate. Another call to the cab company didn’t help. Finally, The Boy called another company, and they showed up within ten minutes. (It had by now been over thirty minutes, with no sight of the other cab–on a Sunday morning!) That driver was our hero. He transformed from regular cabbie to Indy 500 contender, and got us there with two minutes to spare. Then we found ourselves in the midst of a fifteen minute speech-and-warm up session, and realized we’d wasted a lot of time worrying for nothing. Isn’t that always how it goes?

The race had a mass start, but once we managed to work our way through the crowd, we picked up our pace. I was terrified I would let The Boy down by needing to walk, or by not being able to keep up with him. I had no idea how far it was, or how fast I should be going. But the first couple of kilometres were easy for me. It was only at the 3.5-4.5 mark where I started having some issues. My legs, exhausted to the max by the Jillian workouts, started feeling really tired. I did a fast walk for a couple of seconds, just to gulp some water, and then resumed our jogging pace.

Finally, I saw the crosswalk where the race had began! I got so excited…we were almost there! So I picked up speed until we both figured out that the crosswalk was not near the finish line. We had no idea where the finish line was. At that point, the heart went out of me. “Where does this thing end?” I wondered. I could give it everything I had if I knew how much farther I had to go. Then we saw where the finish line was and it was full speed (or as much as we could manage) ahead. People yelled at us to drop each other’s hands so we’d have an accurate time, but we ignored them. We couldn’t have cared less about our time. We wanted to finish together, and we did. It was a tremendous bonding experience. I’m not much of a runner, so I did this primarily to support The Boy in his goals, and I’m so glad I did. It was more than worth it.

It’s amazing how much can change in a small space of time. It wasn’t that long ago that I decided to undertake a 25 kilometre walk for cancer. One of my friends had been diagnosed with thyroid cancer, which had also struck my ex’s brother-in-law and father. I’d never tried a fundraising walk before, and I’d never walked 25 kilometres in one shot, but I wanted to try. With our shared cancer experiences, I thought my ex (who I was dating at the time) and I could do it together. He refused. “Walking is boring,” he said. So I asked my friends. I couldn’t find anyone who was interested, and the only friend who was enthusiastic about it was actually one of the organizers and would be working at the event. I went on one official training walk, where I chatted briefly with a friendly woman. I ended up asking if I could join her team on the big day, just so I wouldn’t have to walk alone.

That walk was one of the loneliest experiences of my life. The woman and her teammates were wonderful people, and talking with them made the time go by faster, but I seemed to be the only one walking without close friends, family, or co-workers. When we finished the walk, each woman in our group was embraced by her husband, children, or friends. There was no one there to meet me. My ex ended up being forty-five minutes late, and my friends couldn’t make it. I felt completely, utterly alone. 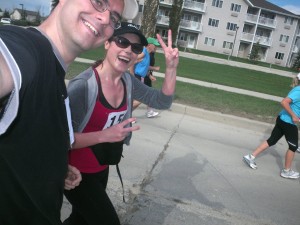 Fast forward to last Sunday, when I finished running five kilometres with a person who loves me and who will always be there for me. You don’t have to be in a relationship to have this kind of loving support–after all, I was dating someone during the cancer walk and it didn’t help me in the slightest. But when you have someone who’s willing to stand up and say, “I see what you’re trying to do, and I support you. Let me help. Let me be there with you”, it’s the best experience in the world. And if we can get over ourselves and our egos and let that person in, we may just open ourselves up to a better life than we ever thought was possible.

Making the Cut, Day 6-7: Progress! Today’s weigh-in revealed that I lost six pounds in the first week! Successfully stayed on the plan throughout the weekend (yay!) except for a conscious decision to have some healthy carbs on the morning of the race. I don’t think I’ll be on a plan like this if I compete again–it’s too easy to lose power without carbohydrates. Substituted the race for Jillian’s workout on Sunday, but I also did some weight lifting and sit-ups.
To bed at: 10:40 p.m.
Awake at: 6:30 a.m.
Novel pages written: One (yes, I have to get better at this!)