A Day in the Life of a Scientist 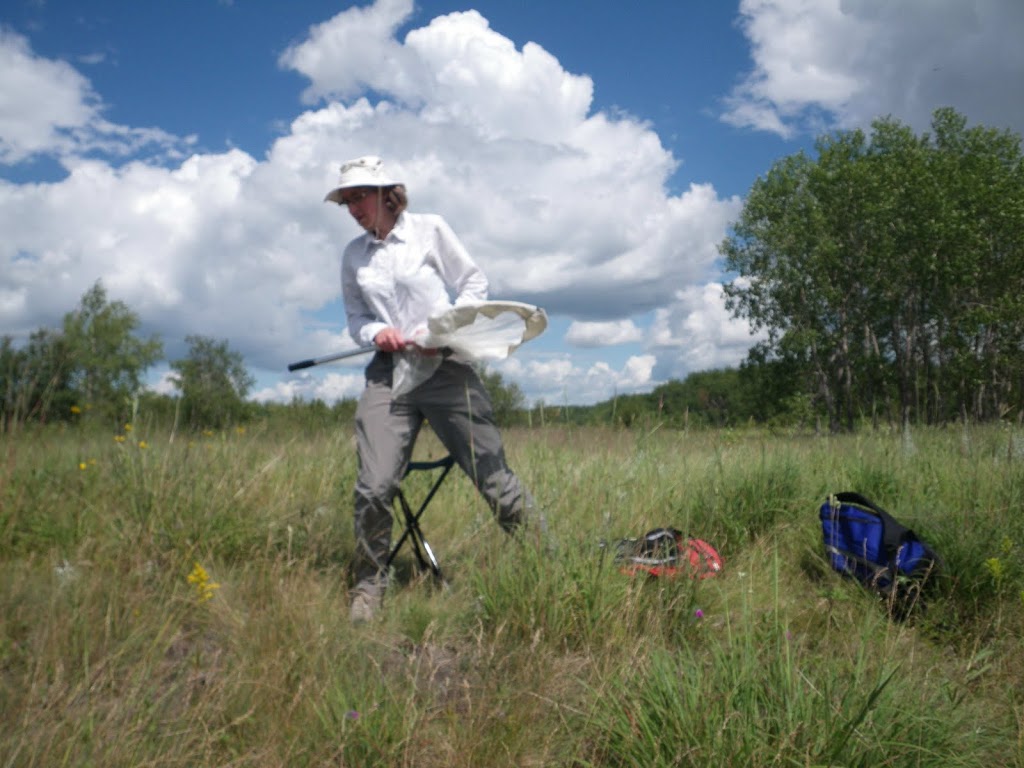 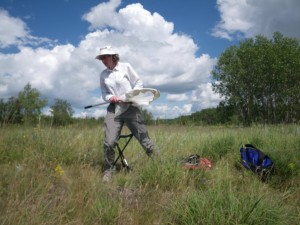 Normally I don’t blog about the day job, but yesterday I got the chance to do something really cool.  Many people don’t know this, but we have six curators working at the museum. Most of these curators are involved in some very interesting, high-level research. Yesterday, I was able to join Dr. Diana Robson, our curator of botany, on a field work trip to Birds Hill Park.

As a kid, I loved the Indiana Jones movies. (Still do.) I was thrilled at the possibility of being an archaeologist, hunting for valuable artifacts. The next best thing is working with an archaeologist, but when Kevin does his field work, it’s usually in some remote northern location for quite a long time. It’s difficult, if not impossible, to just tag along on one of his trips. Diana’s field work is much closer to home (Birds Hill is a forty minute drive from the city). You may be thinking that a botanist’s work is much less interesting than an archaeologist’s, but you’d be wrong. Diana is fascinating! With her knowledge of plants, she can tell you the history of pretty much anything you eat (did you know Italian bruschetta is a “rip-off” of Mexican salsa, for instance?), along with a lot of other cool stuff. And she’s passionate about saving and protecting our native plants. 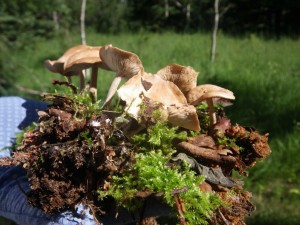 The day started off with mushroom hunting. I love mushrooms, and discovered a passion for taking photographs of them during a camping trip last summer. It was great to find new mushrooms for the museum’s collection. Diana only collects mushrooms if there’s plenty of the same species around. I have a pretty good eye, so with two of us looking, Diana’s canvas bag was soon filled with new specimens and she had to cry “no more!” It was great to feel like I was actually doing something useful. I learned a lot, too. For instance, Diana told me that different kinds of trees will have different kinds of mushrooms  growing underneath, and that trees in the forest are dependent on the microbiological elements that the fungus provides. There is a type of mushroom, for instance (appropriately called a pine mushroom) that will only grow beneath a pine tree. Also, the mushroom is the flower of a fungus. You can pick it, and the fungus itself will still be alive underneath the soil. 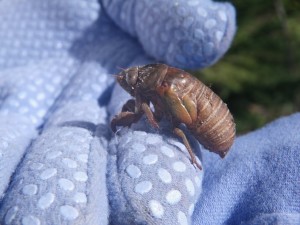 One of the oddest things I found on the trip was a strange bug carcass. I pointed it out to Diana, who picked it up for a better look, and then said “Carcass, my ass!” It was moving. Guess it was just pretending to be dead. It was the strangest-looking thing–no wings, huge front claws, tiny antennae, and it had such an weird way of moving, almost pulling itself forward by its claws. Diana had never seen anything like it, but she couldn’t bear to collect it, so I took a few photos and we let it go. After looking in one of The Boy’s reference books, I discovered that it had a close resemblance to a cicada in its nymph stage. I’m going to get the museum’s zoologist to properly identify it from the photos. That’s one great thing about working at a museum–there’s someone here who can answer pretty much any question. What’s this rock? Is this safe to eat? What was that bright thing in the sky last night? What’s the name of this weird plant that keeps showing up in my garden? How can I stop my fridge from leaking? You name it; we’ve got it covered.

After mushroom collecting and weird bug finding, we had to visit Diana’s research plots. She had four of them, each comprising of four different sites. Our task was to watch each site for ten minutes, recording which insects pollinated the flowers, and which flowers they visited. If Diana didn’t already have a sample of the insect, she collected it. I was actually able to get her two new ones for her collection, so I felt pretty good about that. Look Ma, I’m helping a scientist! 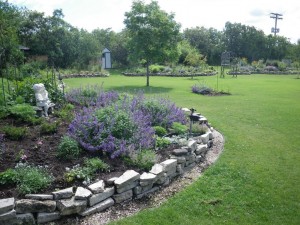 As a treat, Diana took me to Pineridge Hollow for lunch. The best way of describing this place is saying it’s what Hansel and Gretel must have felt like when they found the witch’s oasis after starving in the woods for days. It is more than a restaurant–it’s like a full-day retreat, and it is indescribably beautiful (hence the photo). I could have looked at their gardens all day, let alone the furniture store! But we had work to do, so we kept the site-seeing to a minimum. Lunch was delicious–portobello burgers with sun-dried tomato pesto and yam fries–yum! I should have taken a photo, but it tasted a lot more delicious than it looked. 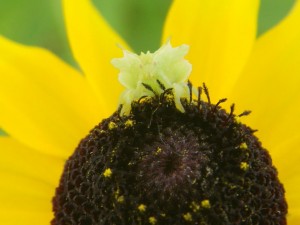 After lunch, we continued to visit Diana’s plots until 4:30 pm. I was able to get some neat photos, using the macro setting on The Boy’s camera, like this one of an ambush bug in its nymph stage. Ambush bugs, like their name implies, wait on flowers for pollinating bugs to come along, which they catch and eat. This bug was so tiny (smaller than the fingernail on my pinkie) so I was surprised to notice in the photos that he looks like a tiny dragon or Pegasus. Pretty cool! I also made a new friend–a butterfly settled on my hand and started licking it! How many people can say they’ve been licked by a butterfly? It was fun to see how many people stopped Diana to ask what she was doing. They seemed really interested. One family said they’d even stop by the museum to see the mushroom display.

At the end of the long day, I got to go home, but Diana’s work had just begun. She had to take spore prints of all the mushrooms we’d collected, and then put the fungi in the dehydrator. (No, she didn’t eat any, although she was tempted.) One of the things I learned during the day was that there’s a poisonous mushroom that kills you with a toxin that causes your body to devour its own liver. Nasty. So I don’t recommend eating wild mushrooms unless you really know what you’re doing.

The verdict? While it’s nice to sit outside in a beautiful park all day, enjoying the sun, what curators do is also a lot of work. It requires great attention to detail and patience. Getting back behind the computer today seems pretty cushy by comparison. I’d do field work again, but every day? Not on your life! I guess I’m not cut out to be a scientist.