A Crazy Thing Happened in China… 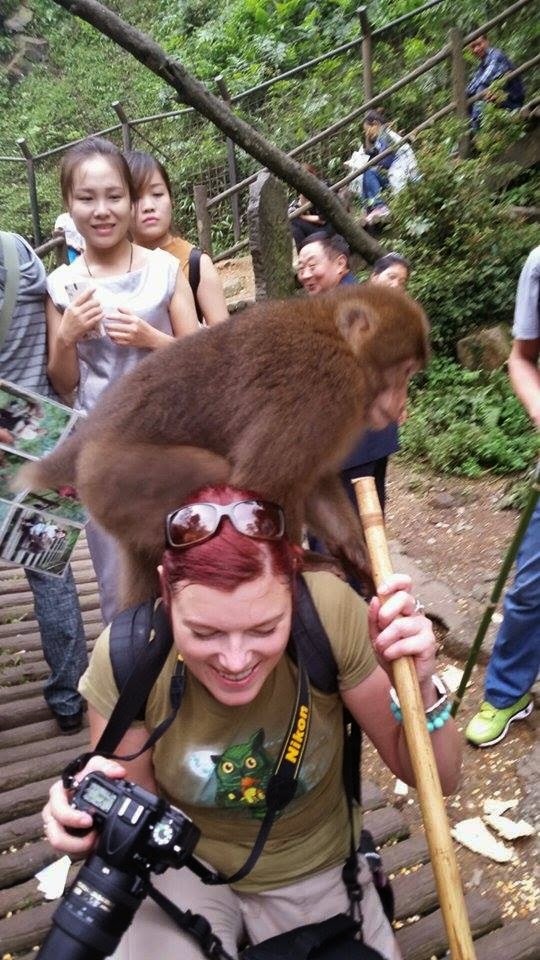 I’ve just returned from the trip of a lifetime–almost a month exploring the culture and history of China.

I’d wanted to visit China since I was a little girl and first saw pictures of the Great Wall. It was on my bucket list long before people called them bucket lists.

And China didn’t disappoint. From Beijing and Shanghai to Chengdu and Yangshuo, China was both awe-inspiring and challenging. It’s a dizzying mix of old world meets new–monks talking on smart phones, gift shops at the terracotta warrior dig site, splashy skyscrapers nestled among temples that are thousands of years old.

In a country like this, anything can happen, and pretty much everything did. In no particular order, here’s the ten craziest things that happened during my month in China.

1) Holli, Defender of Monkeys. To prepare us for a trek up Mount Emei, we were armed with large bamboo poles to fend off the area’s notorious food-stealing macaque monkeys. Little did I know I’d end up using my pole against a local woman!

The monkeys were gentle, much more peaceful than the ones I’d encountered in Bali, and really cute to watch. I was stunned when I saw a woman hit a baby monkey in the face with a bottle of hand sanitizer. I was horrified when she followed this up with smearing hand sanitizer in the baby’s eyes! Without thinking, I started hitting her in the legs with my pole, yelling “No!” I also pointed her out to the “monkey police.” I was upset for the rest of the climb, but at least I could take comfort in the fact that I did something about it. And it makes for a good story.

2) A Monk Stole My Bathing Suit. Well, he was more of a monk’s assistant and he didn’t actually steal it, but all I know is–out of all the bathing suits he was given to dry, only my bikini never returned. It makes me smile to think of that earnest little man wearing polka dot bikini bottoms…cause what else could have happened to them?

3) I Groped a Panda. It took some doing, and some of our tour guide’s best arguing, but I was able to achieve one of my life’s dreams–cuddling with a giant panda bear. My chosen cub,  Hexsing, was only a year old but already weighed so much that two people had to carry him in. I’d like to say we had a moment, but he was much more interested in his apple than in me. Oh well. How many people can say they groped a panda?

4) I Met The Chinese Fred Astaire. In China, people love to exercise. In the strangest places, women will participate in a spontaneous exercise routine that is part line-dance, part tai chi and part aerobics. I was sitting in a Yangshuo park with some awesome new friends when I first learned that men also get into the act. An older man drove up on a scooter. Taking off his sparkly pink helmet, he proceeded to unpack a professional-looking sound system. Once he was ready, he burst into song, and before long, several old men began to circle around him and dance.

One in particular caught my eye. He was the Chinese Fred Astaire, slim and graceful in his purple shirt and dress pants. As he moved his body to the music, leaping and spinning, a beautiful smile lit up his face. I could have watched him forever.

5) Attacked By a Blind Man. Not all the elderly men were quite so charming. I was waiting for the light to change in Shanghai when a blind man walked right up to me, screamed something I couldn’t understand and started whacking me in the legs with his cane. I still have no idea what he was trying to say….

6) Participating in the Anti-Talent Talent Show. On the last night of our Yangtze River cruise, our guide had the brilliant idea that our group should perform in the ship’s talent show. There were several obstacles. One: we’d had no time to rehearse. Two: the ship’s limited English music selection limited our “dance” performance to Michael Jackson or Michael Jackson. And three: all we had to aid us was a ridiculous assortment of props that had no relation to each another–maracas, feathered fans, a cowboy hat with beaded dreads attached??, Blues Brothers-type fedoras, and tambourines.

Aside from the crew, the only other group to perform were serious German folk singers who had obviously put some effort into their rehearsals. Then it was time for our group. Between an impromptu staged battle, some bad break dancing, a heartfelt air guitar solo, and a pseudo moonwalk, we pulled it off. Or at least confused our audience enough that they didn’t realize we had no clue what we were doing.

7) Stuck in an Elevator. Perhaps fate decided that after such a magnificent trip, our farewell dinner was anti-climactic. Not to worry, because on our way out of the restaurant, half of our group got stuck in an elevator. After some “stuck in an elevator” selfies, some of the women began to panic.We were told the maintenance crew was on their way and would be there in five to ten minutes. Not one to wait around, my South African friend managed to pry the doors open, saving us from a slow death. Adventure over.

8) Failing a Cooking Class. I like to think I’m a good cook, but I was no match for Peter, the Tyrant of Traditional Chinese Cooking. Concerned that my carrot sticks weren’t small enough, I proceeded to whittle them down further with my cleaver. “Noooooo!” Peter screamed, pointing at my plate. “Don’t do that!” The resulting silence was deafening.

It was not an auspicious beginning to my first (and last) Chinese cooking class, which also included several rounds of humiliation by dumpling and choking on Sichuan pepper fumes. Not recommended.

9) Planes, Trains and Automobiles. If there was a mode of transport in China, our group made use of it. I think the only one we missed was the rickshaw. It was not uncommon for us to spend sixteen hours on a public train and disembark, only to walk five miles to get to a bus, where we spent another few hours. This was usually followed up with several trips on the subway for good measure.

But my all-time favourite was the scooter. If you feel like looking death in the face and laughing, I highly recommend it. Many thanks to Mr. Lau, who took me on a high-speed trip of a lifetime through the heart of Yangshuo. Why cycle when you can fly?

10) Petting a Fish. There’s an old tea house in Shanghai where you can pet a koi fish. If you’re patient, quick, and really, really want to.