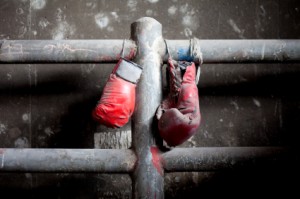 That’s how much time I have to shave off my run in the red prajioud test.

I went to the dojo early last Friday for my first one-on-one coaching session in years. My kru started off by asking me to write down the three aspects of the test I’m the most confident about. That was easy:

Then he asked me to write down the aspects of the test I’m the least confident about. That was easy as well:

What I didn’t expect was for him to suddenly test me on the aspects I’m concerned about. Without much training or any preparation, he asked me to run the twenty-nine laps around the gym. I was nervous as hell–I haven’t been running that much yet, and twenty-nine laps seems like a lot to me. But what choice did I have? So, with Eye of the Tiger playing on my iPod (my secret weapon), I started off at a good pace.

Initially Kelly planned to give me updates on my time, but since I was wearing an iPod, he just showed me when I had five laps left to go. It was difficult not knowing how much time was left, and I’m confident that if I’d known I was getting to the end, I could have pushed it, completing the run at 8:30. As it was–without much training and not knowing the time, I was only twenty seconds over. Twenty seconds over! I have to admit, I’m really proud of myself, since the run is what I’ve been dreading most. Kelly was surprised at my time as well–I think he expected me to be a lot slower. My cardio wasn’t too bad–I wasn’t even breathing that heavy. My legs were tired, but that was about it.

To test flexibility, you must kick above your shoulder level three times consecutively. This turned out to be easy for me. Again, Kelly was surprised, and I have to admit that I was as well.

The next challenge was the double kicks. Twenty double kicks in one minute. I’m a power kicker. My hand speed is fast, but I find double kicks extremely difficult. I managed to get the correct amount finished in time, but my technique was sloppy. Still need to work on that.

After this test, it was time to take the Fun Friday muay thai class. I had a great partner who pushed me, and I think I did quite well, considering.

As a result of the one-on-one session, I’m a lot more confident about my ability to pass the test. I suspect that was Kelly’s rationale all along. What a confidence builder!

I’m going to need all the confidence I can get, since I have two consecutive days of double classes this week, and one is (gulp!) Level 2.

Any training advice for me?